Earlier this week, both the House and Senate passed a budget package to fund the government through the remainder of fiscal year (FY) 2013, thereby averting a government shutdown when current funding expires on March 27.

Earlier this week, both the House and Senate passed a budget package to fund the government through the remainder of fiscal year (FY) 2013, thereby averting a government shutdown when current funding expires on March 27. The new compromise funds most accounts roughly at FY2012 levels, with an across the board cut of 0.092 percent. As a reference, the Centers for Disease Control and Prevention's Center for Global Health budget was $349 million in FY2012, while the National Institutes of Health was funded at $30.69 billion. In addition, global health programs at the State Department and US Agency for International Development (USAID) were funded at $8.167 billion.

The budget package also makes some key changes to certain programs. For instance, global health programs at the State Department and at USAID, including those that fund global health research and development (R&D) initiatives, are increased over FY2012 levels by roughly 5 percent—potentially to counteract the effects of sequestration. The bill also gives greater flexibility to the Department of Defense to manage sequester cuts to its budget. It also leaves the sequester largely in place, instead of replacing it with balanced budget cuts, as many advocates in the global health community were hoping lawmakers would do. The bill now goes to President Obama’s desk, and he is expected to sign it. 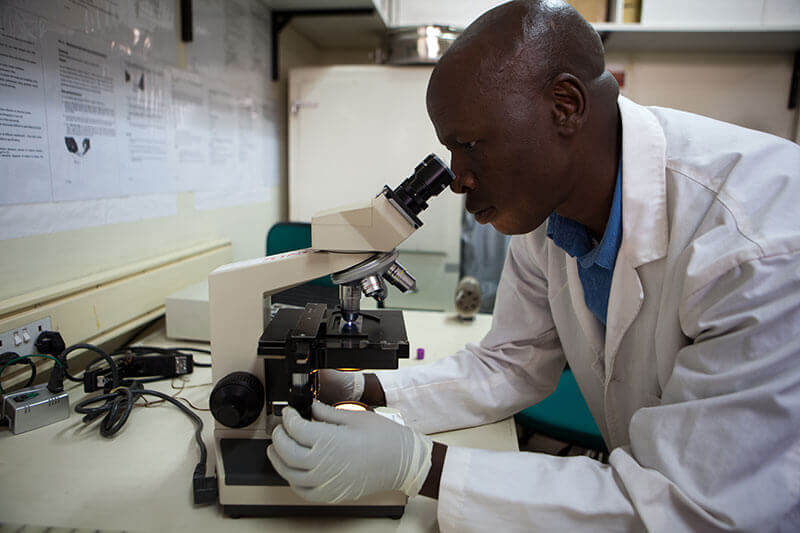 Budget negotiations in Congress will have far-reaching effects on global health R&D efforts at agencies such as CDC, DoD, NIH, and USAID. Photo credit: PATH/Evelyn Hockstein.

If and when Obama signs the final FY2013 budget package into law, the funding levels will still be subject to sequestration—meaning that the final levels are really anywhere from 5 percent to 9 percent lower. For instance, USAID’s global health programs would see an overall cut of $193 million. While this is better than the $428 million cut it was facing before the Senate stepped in, it could still have a large impact on global health and R&D programs that fall under USAID.

The House also passed its version of an FY 2014 budget resolution, which would replace sequestration with budget caps for the next decade. The House resolution would move most of the budget cuts away from the Department of Defense and onto non-defense accounts, including most global health R&D programs, and would balance the budget over the long term. The Senate has introduced its own budget resolution, which could pass today or tomorrow. The Senate version is very different from the House version, as it would make balanced cuts to both defense and non-defense programs and protect non-defense programs from the drastic cuts seen in the House budget. The Senate version does not include a plan to balance the budget in the short- or long-term, but contains a significant reduction in spending over the next decade.

Although replacing sequestration with an actual budget plan is widely approved of, advocates for both domestic and global health programs believe that the House budget resolution would be devastating for key health and humanitarian programs. Therefore, as Congress makes decisions on FY2014 spending bills, lawmakers should use a balanced approach when allocating budget cuts (as seen in the Senate version), and increase support for global health and R&D when possible. Additionally, as agencies receive their final FY2013 budgets, they should ensure that global health and R&D programs are protected.

Written by Claire Wingfield / PATH
Read time:
In this guest post, Claire Wingfield—product development policy officer at PATH—writes about a new paper that examines partnerships between the public and private sectors to advance global health innovation, research, and development. For more than 30 years, PATH has been working to advance innovative global health solutions. Partnering is a core part of PATH’s strategy and is fundamental to how we develop and deliver high-impact, cost-effective technologies. Our partners come from international health agencies, governments, universities, other nongovernmental organizations (NGOs), and private-sector companies. Each partnership is unique, but no matter who the partner is, the collaboration must be mutually beneficial and fulfill our mission to improve the health of people around the world. Public-private partnerships provide a forum for maximizing complementary areas of expertise. They improve knowledge of the most pressing global health needs and lead to solutions that improve health equity. By strengthening the capacity of different sectors, these partnerships accelerate the development and introduction of the most promising technologies for those most in need. Finally, forging new cross-sector partnerships with public institutions and commercial entities enable organizations like PATH to maximize the limited global health resources of both sectors—financial, technical, and structural—to reduce costs and avoid redundancy in our efforts to ensure the affordability of much-needed global health technologies. For instance, in many low-income countries, where budget resources are stretched thin, health systems may not be able to ensure the safety of health tools and products. This leads to situations where the very injections meant to prevent or treat disease can end up causing it instead because under-resourced, overburdened health care programs reuse or fail to properly sterilize contaminated injection equipment. Recognizing the tremendous negative impact that unsafe injection practices can cause, PATH researched how to improve injection practices to reduce the risk of transmitting bloodborne diseases such as HIV and hepatitis B in low-resource settings. The US government, through the US Agency for International Development, provided funding to PATH, enabling us to develop and patent a design for an auto disable (AD) syringe that automatically locks after a single injection. A partnership between PATH, the US government, and Becton, Dickinson and Company led to the development of SoloShot™, the world’s first commercially available auto-disable syringe. Credit: PATH/Eric Becker While PATH had the scientific and technical know-how to design the technology, a commercial partner was needed to validate the design, support large-scale production, and enable widespread distribution. PATH licensed the technology to Becton, Dickinson and Company (BD), the world’s largest syringe manufacturer. BD brought product development expertise to advance the technology beyond proof of concept, manufacturing capabilities to produce a global supply, and distribution channels to ensure the availability of the technology in the public and private sectors. The US government’s investment in the product’s development—harnessed many times over by BD’s own investment in the device—enabled PATH and BD to pursue an aggressive distribution program that led to SoloShot™, the world’s first commercially available AD syringe. A major boost to the introduction and use of AD syringes occurred when the United Nations Children’s Fund and the GAVI Alliance began purchasing and distributing AD syringes for their programs. The US government also accelerated the adoption of the technology by aggregating demandthrough the US President’s Emergency Plan for AIDS Relief (PEPFAR) program. Because injection safety was one of PEPFAR’s top priorities, the US government procured more than 250 million AD syringes for 11 countries through the Making Medical Injections Safer project over its five-year life. Since 1992, more than six billion vaccinations have been delivered using SoloShot™ in more than 40 countries. Studies have shown that transmission of bloodborne diseases caused by dirty needles has been reduced by 90 percent in programs using some form of AD syringe. Creating partnerships that harness the assets of the private sector and the public sector together is a powerful means to ensure impact, scale, and sustainability for the world’s most vulnerable populations. The partnerships help align the strengths and requirements of each sector to ensure that appropriate technologies and innovations reach communities and individuals with the greatest need.
PATH/Aaron Joel Santos

Written by Jamie Rosen / Aeras
Read time:
In this guest post, Jamie Rosen—media and communications manager at Aeras—writes about a new film series that features personal stories of people affected by tuberculosis (TB) worldwide, and the urgent need to develop new vaccines and other tools against the disease. Aeras is excited to share the trailer for a series of short films exposing the underreported global epidemic of TB and the movement for innovation to improve our tools to fight it. In the TB community, as in other areas of global health, we are constantly seeking ways to help people comprehend the scale and the individual tragedy of this disease, to understand the difficulties of treating it, and to inspire people to do what it takes to adequately address it. Aeras has been working with filmmaker Mo Scarpelli and her crew over the past several months to produce four films. Each film will focus on the story of one individual interspersed with expert interviews, and will feature footage from five countries around the world. The first film will focus on an American multi-drug resistant TB survivor; the second on an Indian TB doctor; the third on a South African woman who volunteered for a clinical trial; and the fourth on a British researcher working to develop new TB vaccines. Aeras is grateful for the advice and participation of many people who are working tirelessly to take care of today’s TB patients and foster hope for a better future—one with more effective diagnostics, drugs and ultimately vaccines against this rapidly evolving disease. If this trailer inspires you, please go to www.aeras.org and spread the word. For more information or to organize a screening, please contact Jamie Rosen at jrosen@aeras.org.