We asked. WHO listened. The World Health Organization (WHO) took the first step toward establishing an essential diagnostics list, releasing a proposal outling how it plans to develop and operationalize the list by early 2019. 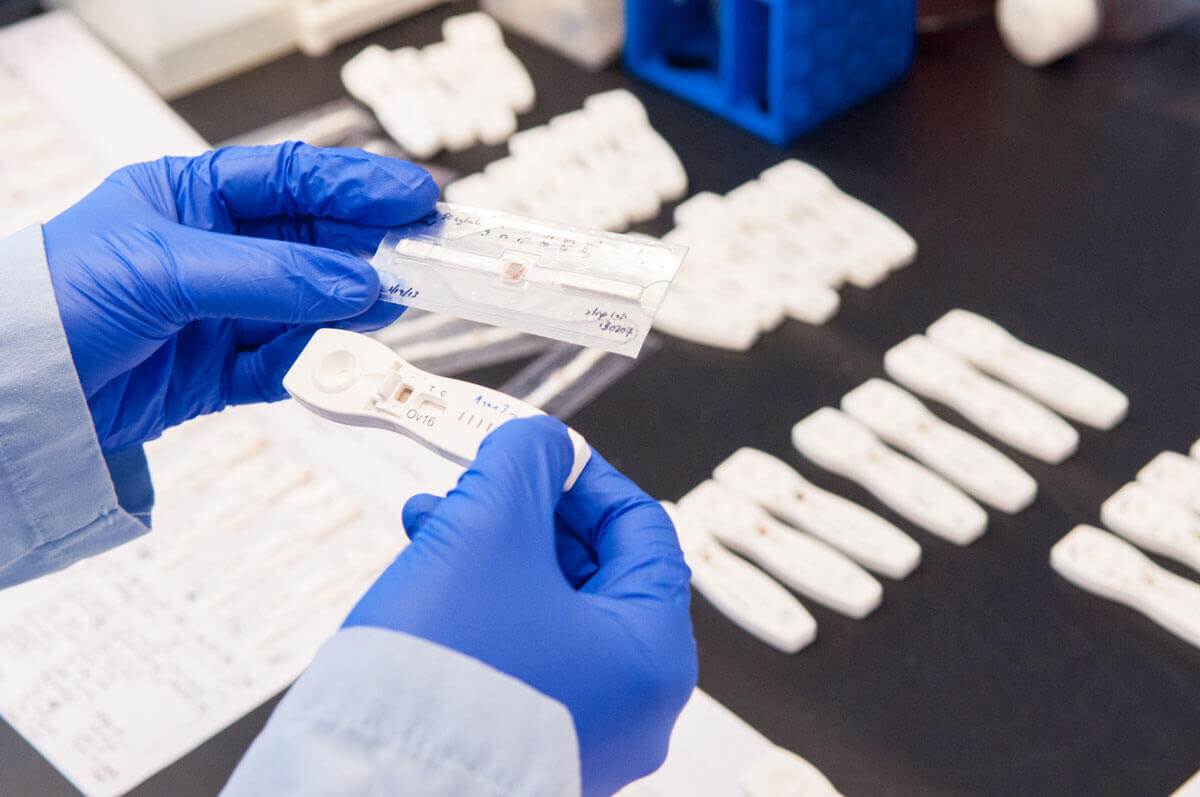 A researcher holds onchocerciasis (river blindness) diagnostic tests. Photo: PATH/Patrick McKernLast Thursday, the World Health Organization (WHO) took the first step toward establishing an essential diagnostics list (EDL), releasing a proposal outlining how it intends to develop and operationalize the list by early 2019. This move follows calls by GHTC and other partners for the agency to establish an EDL to provide guidance to countries on the vital diagnostics that should be made available through health systems to complement WHO’s existing Model List of Essential Medicines (EML).

As GHTC has previously noted, the need for an EDL to complement the EML is clear and has been compellingly demonstrated. An essential diagnostics list would not only help health care providers, particularly in low- and middle-income countries, improve diagnostic capacity and access, and thus improve patient care, it also holds potential to catalyze research and development (R&D) for new diagnostics by exposing health areas where we today lack appropriate and effective tools. GHTC is pleased to see WHO heed this call from advocates and scientists and begin the process to establish an EDL. 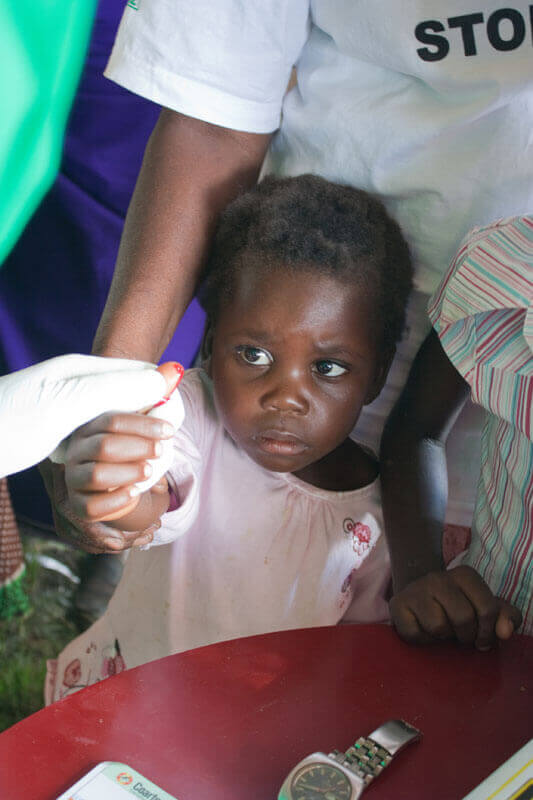 A researcher holds onchocerciasis (river blindness) diagnostic tests. Photo: PATH/Patrick McKernThe proposal released by WHO lays out the broad principles the agency will follow in standing up an initial version of the diagnostics list. This includes:

Moving forward, WHO’s essential medicines staff will consult with the Expert Committee on the Selection and Use of Essential Medicines at its meeting in March to gather technical input on how to best operationalize the principles outlined above. Based on this feedback, a pilot group of diagnostics will be evaluated based on existing evidence of programmatic impact, with the goal of completing the development of an initial version of the EDL by early 2019.

GHTC will continue to follow this issue closely and work with our members to ensure that the first version of the EDL is solidly grounded in our decades of combined experience with diagnostics and that the process of establishing the list moves forward efficiently. Keep watching this space for updates.

US Department of Agriculture/Lance Cheung

Written by Kat Kelley / GHTC
Read time:
In this regular feature on Breakthroughs, we highlight some of the most interesting reads in global health research from the past week. Scientists have identified a gene that stops tuberculosis (TB) from mutating and becoming resistant to antibiotics. Researchers at Centro Nacional de Biotecnología in Madrid and the University of Sussex in Brighton individually deactivated each of the 11,000 genes that make up the TB bacterium, and tested the modified strains against an antibiotic commonly used to treat the disease. The study revealed that the NucS gene, which produces an enzyme that repairs DNA, significantly reduces the frequency of genetic mutations, and consequently, the development of antibiotic resistance. As drug-resistant strains of TB have been reported in more than 100 countries, this discovery could pave the way for improved diagnosis and treatment, making it easier for clinicians and researchers to predict which cases of TB will develop resistance. The US Agency for International Development (USAID) is the largest donor of food aid worldwide, spending US$1.5 billion on wheat, sorghum, rice, and other edible commodities annually. As the food travels around the world, an estimated 1 percent is lost to spoilage, which amounts to 10,000 tons of food worth $15 million. Now, researchers at the Massachusetts Institute of Technology are exploring new ways to package the food to avert spoilage and are testing eight different bags of varying sizes and materials to determine their ability to protect against humidity, water damage, and pests. One model has a completely airtight liner that resists moisture, while another uses a biopesticide that stops insects from reproducing, rather than killing them. The research team is also investigating the use of an airtight liner for the shipping containers, rather than the bags themselves. The final results and recommendations will be available this summer. Gene drives, a promising technique for eliminating mosquitoes and eradicating mosquito-borne diseases, may be stymied by evolution. The novel method involves genetically modifying mosquitoes by introducing an unusually dominant genetic mutation that is passed on to the insects’ offspring, overtaking an entire population of mosquitoes within a few generations. To combat malaria, Zika, and other mosquito-borne diseases, scientists have engineered mosquitoes whose offspring are infertile, and initial trials suggest that gene drives could be a breakthrough in vector control. However, additional research indicates that as these manmade genetic mutations spread through a population, so too do natural mutations that counteract the effect. Furthermore, there is an immense amount of genetic variation among mosquitoes, which limits the potential targets for gene drives. To overcome this, some researchers are introducing multiple genetic mutations at once, however, it remains to be seen whether the manmade or natural mutations will be more powerful.
PATH/Katrina Peach

Written by Kat Kelley / GHTC
Read time:
In this regular feature on Breakthroughs, we highlight some of the most interesting reads in global health research from the past week. The location of pig farms can influence human flu patterns, as farmworkers may be among the first exposed to new strains of swine flu. Researchers at Duke University compared a map of North Carolina’s concentrated animal feeding operation (CAFOs) to the location and timing of flu outbreaks in the state, concluding that counties with high numbers of CAFOs experience early peaks of flu cases during years in which a strain of swine flu is in circulation. However, the same effect was not seen in years when the most common strains of influenza did not originate in pigs. The trend is likely attributable to transmission of swine flu from pigs to farmworkers, and subsequently to their family and friends. While efforts targeting CAFOs, such as animal surveillance or vaccination, could decrease human risk for swine flu, a more affordable and immediate solution is for farmworkers and their families to get a flu shot as early as possible each year. Extensively drug-resistant tuberculosis (XDR TB) may be more infectious than previously believed, according to new research out of South Africa. Tuberculosis (TB) is difficult to treat as patients must take multiple pills a day over months or even years. When patients are unable to complete the regimen, the bacteria can grow resistant to the medicines, resulting in multidrug-resistant and XDR TB. However, a study of 404 XDR patients in South Africa suggests that only one-third of cases are due to treatment failures, whereas the remaining cases resulted from person-to-person transmission. These findings indicate that combatting XDR TB will require both improved treatment for TB patients and enhanced prevention and detection efforts. A common fungal infection, Candida auris, is growing increasingly drug resistant. Strains that are resistant to all three classes of antifungals have been reported in five continents. As with antibiotic resistance, antifungal resistance has emerged as a result of inappropriate and overuse of antifungals, and while it may not be as widespread, there are fewer classes of antifungals, providing few alternatives if a treatment fails. An investigation of 54 samples of C. auris found that nearly all were resistant to the first-line medicine (fluconazole), 22 were resistant to both the first and second-line treatments, and 2 were resistant to all three classes of antifungals. Further, standard approaches to disinfecting hospital rooms and equipment are insufficient to eliminate C. auris, increasing the risk of hospital-acquired infections. While cases remain limited, the fungus has an extremely high fatality rate, killing 60 to 70 percent of those infected. Nine recently approved and widely used hepatitis C medicines may have serious, unexpected side effects, including liver failure. The new antivirals cure nearly all patients, have fewer side effects than older medicines, and significantly shorten the duration of treatment. However, a new report published by the Institute for Safe Medication Practices details adverse effects, including potentially fatal liver failure and reactivation of the closely related hepatitis B. At this time, cases are rare and the findings are inconclusive, as the Institute did not have access to patients’ medical records that could shed light on whether the side effects preceded treatment. Now, the Food and Drug Administration is calling on physicians to screen and monitor for hepatitis B in patients taking the new medicines, and a similar approach might be needed to rule out the risk of liver failure.