The end of AIDS requires increased commitments to research

In this guest post, Anupama Dathan—health research assistant for ONE—writes about a new report that examines global commitments to ending the AIDS pandemic.

In this guest post, Anupama Dathan—health research assistant for ONE—writes about a new report that examines global commitments to ending the AIDS pandemic.

With world leaders calling for ambitious goals like an AIDS-free generation and achieving the beginning of the end of AIDS, ONE and many of its partners in the scientific and advocacy communities have been working to define this vision. Also known as the AIDS tipping point, the beginning of the end of AIDS occurs when the number of people newly added to treatment in any given year is equal to or exceeds the number of people newly infected with HIV. To track global progress towards this point, ONE recently released a new report, called The Beginning of the End? Tracking Global Commitments on AIDS. This new report is the second in a series of annual AIDS accountability reports. 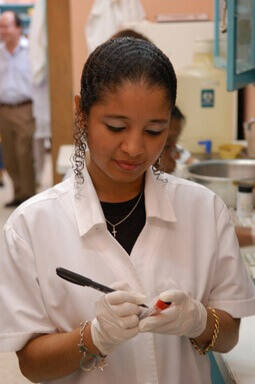 A new report from ONE finds that funding needs to be scaled up appropriately to support research on new, diverse HIV and AIDS interventions. Credit: PATH

And though it is a vast improvement, a closer look also reveals it is very one-sided. Despite a reduction in the number of new HIV infections, most of the progress stems from an annual accelerations in the number of people newly accessing treatment each year. Truly ending the AIDS epidemic will be next to impossible without also dramatically reducing new HIV infections, a feat that requires renewed attention to HIV prevention measures. This is why ONE is calling for increased funding and support for HIV research and development (R&D).

AIDS treatment mechanisms, such as antiretroviral drugs (ARVs), came into existence thanks to focused, well-funded research. This same focus must now be paid to HIV prevention. Unfortunately, we are headed in the opposite direction. Instead of well-funded research, we’re seeing a steady decline in HIV R&D funding, something that has hindered the development of new prevention tools that could combat HIV even more effectively. A few promising trials of tools and products are in progress, but funding needs to be scaled up appropriately to support research on new, diverse interventions. Innovations like an HIV preventive vaccine have yet to be found.

Arguments can be made that the focus should be on improving access to existing prevention mechanisms—pre-exposure prophylaxis, male and female condoms, prevention of mother-to-child transmission, to name a few. While this is a valid point, existing mechanisms are only part of the solution. A recent study estimated that depending on its characteristics and level of coverage, an AIDS vaccine could reduce the number of new infections by five to 10 million between 2020 and 2030 while also saving between $46 billion to $95 billion in averted costs of ARV provision. More research is also needed to test recently discovered prevention mechanisms, including the use of treatment-as-prevention.

It’s encouraging to see the progress the world is making towards the beginning of the end of AIDS, but we need to remember that treatment alone isn’t enough. More research into effective ways to prevent AIDS is urgently needed, which is why ONE calls for increased R&D funding in this latest report. Without it, the path to the end of AIDS will be longer, more expensive, and, most of all, will cost many millions more lives.

Anupama Dathan is a health research assistant at ONE, a global movement campaigning to end extreme poverty and preventable disease by 2030.

Written by Kim Lufkin / GHTC
Read time:
In this regular feature on Breakthroughs, we highlight some of the most interesting reads in global health research from the past week. During an event to mark the 25th annual World AIDS Day, President Obama announced that the National Institutes of Health will redirect some AIDS research funds to expand research to find a cure for HIV. The Drugs for Neglected Diseases initiative recently marked its 10-year anniversary with the launch of a report that looks at lessons learned from a decade of research for neglected disease treatments. A new report finds that global health disparities could be eliminated in a generation by increased investments in research for new vaccines, drugs, and other tools to combat diseases such as HIV and AIDS, malaria, and tuberculosis. Pharmaceutical company Pfizer announced that it will broaden access to information from its clinical trials to independent researchers and patients who take part in the studies. African health experts and leaders met recently to discuss the need for improved regulatory systems on the continent to monitor pharmaceutical products. A World Health Organization committee met this week to narrow down a shortlist of 24 research proposals from across the world that aim to tackle diseases that disproportionately affect low-income countries.
ASTMH.

Written by Jaclyn Schiff / American Society of Tropical Medicine and Hygiene
Read time:
In this guest post, Jaclyn Schiff—American Society of Tropical Medicine and Hygiene (ASTMH) Director of Communications—highlights news in global health research presented during the recent ASTMH Annual Meeting. Just two week ago, more than 3,700 attendees gathered in Washington, DC, to announce, share, and discuss the latest research findings on a broad range of global health issues, including neglected tropical diseases, surgery in the developing world, and malaria. Just two week ago, more than 3,700 attendees gathered in Washington, DC, to announce, share, and discuss the latest research findings on a broad range of global health issues at the ASTMH Annual Meeting. Credit: ASTMH. Though the meeting attracted one of the largest crowds ever, the absence—due to federal travel budget cuts—of key researchers from the Centers for Disease Control and Prevention, National Institutes of Health, the Army, and Navy was noticeable. This also significantly affected the Annual Meeting last year, and the cuts persist with no sign of letting up. One unfortunate consequence is that scientific collaboration suffers at the Annual Meeting and at countless other research-focused gatherings. When science is stifled, we all lose out. But our colleagues who were able to make it, got on with it, and the media reported extensively on their findings. News coming out of the Annual Meeting covered a lot of ground—from gender bias in global health science to plague surveillance involving traditional healers in Uganda. So just in case you weren’t able to take it all in, here are three critical pieces of research from this year’s meeting: Potential danger from the Plasmodium vivax parasite: The malaria vector may be rapidly evolving to overcome the natural resistance conferred by a blood type found in millions of Africans. Science Now reported on the findings: To enter human blood cells, the parasite usually uses the so-called Duffy blood group protein, a protein on the surface of red blood cells. But because up to 95 percent of the population across sub-Saharan Africa lacks the protein—a genetic trait called “Duffy negative”—they have long been thought to be protected from infection. Yet reports have emerged in recent years of Duffy-negative people who are nevertheless infected with vivax malaria. “If vivax can establish itself in Africa, it can really undo a lot of the malaria progress we’ve made,” study co-author Peter Zimmerman, PhD, of Case Western Reserve University told the New York Times . Moving towards improved hookworm treatments: Researchers presented findings showing that they had completely cured lab animals of parasitic hookworm. To achieve the results, scientists used a modified version of a common human dietary supplement. The findings represent an “important development in our effort to find a safe, affordable and effective way to confront a major global health problem,” the study’s lead researcher said. In its report on the research, Xinhua  notedthat “the only drugs available to treat hookworms in humans were originally developed to combat parasites that infect farm animals.” The study researchers say that current treatments are not effective enough and that drug- resistance is rising. Strange dengue patterns in the United States: As dengue fever continues to spread from Key West north into the Florida mainland, it remains a mystery as to why this dangerous mosquito-borne illness is not yet common around Tucson, Arizona—even though outbreaks routinely occur in nearby Mexico and mosquitoes that can carry dengue are now common in the state. As The Verge reports, researchers think human or biological factors somehow explain why dengue hasn’t spread in Tucson. "It may be that the temperatures in Tucson are so hot," Mary Hayden, a scientist at the National Center for Atmospheric Research, told the BBC . She added “the relative humidity is so low that the mosquitoes may not be able to survive in that climate long enough for the virus to cycle within them.” Additional highlights, original news stories, and interviews are available on the #TropMed2013 Tumblr.