Celebrating US leadership in global health R&D on Capitol Hill

On Wednesday evening, GHTC was joined on Capitol Hill by congressional champions—Congressman Adam Smith (WA-9) and Congresswoman Betty McCollum (MN-4)—and global health community members for a reception celebrating US leadership in global health research and development (R&D) and the launch of the 2015 G-FINDER report, which tracks investment in neglected disease R&D.

On Wednesday evening, GHTC was joined on Capitol Hill by congressional champions—Congressman Adam Smith (WA-9) and Congresswoman Betty McCollum (MN-4)—and global health community members for a reception celebrating US leadership in global health research and development (R&D) and the launch of the 2015 G-FINDER report, which tracks investment in neglected disease R&D.

A message repeated throughout the evening was that the United States’ world-leading investment in global health R&D has been critical to catalyzing the development of technologies that have driven enormous health gains worldwide. 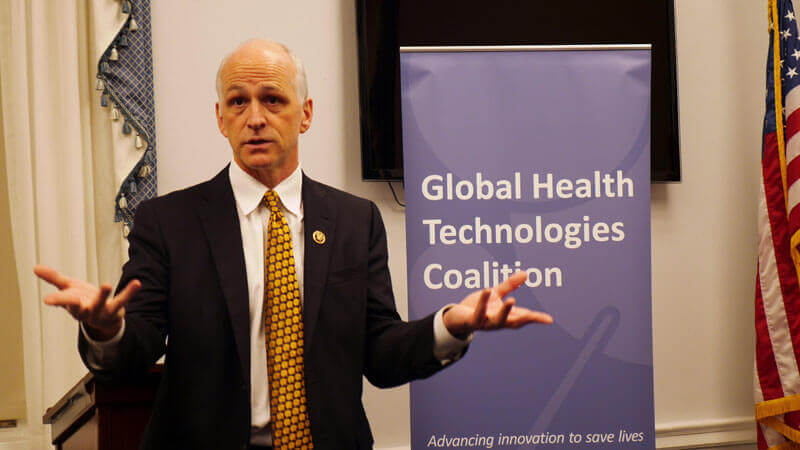 Congressman Smith opened his remarks by noting that the evening should be about celebration, citing the incredible, but often overlooked progress made in global health over the past several decades—progress driven in part by advancements in the development of new vaccines, drugs, and other health technologies. Yet, he also spoke to the critical need to sustain US investments in health R&D to further accelerate these gains. The Congressman pointed out that US global health R&D investments not only benefit people in the world’s poorest places, but can lead to new insights and innovations that improve access to care for people here in the United States. 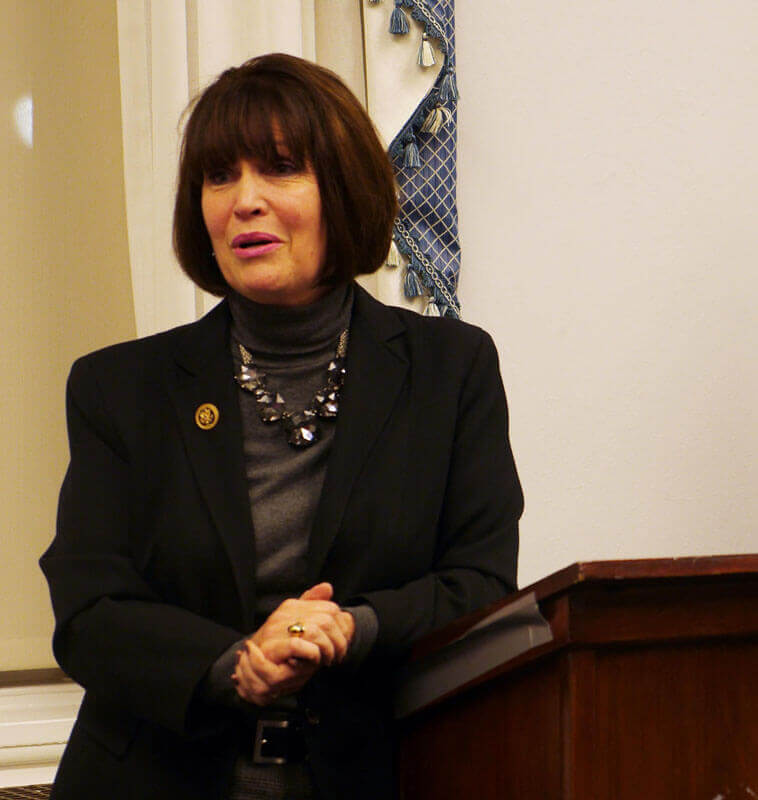 Congresswoman McCollum emphasized that global health is a bipartisan issue in Congress. “Every member of Congress knows no child should die of a vaccine preventable disease,” she said. The Congresswoman noted that global health is a foundational element on which all other development gains are built. Discussing her own experience as a mother and grandmother, she talked about the universal desire shared by parents in all parts of the world to see their children survive and thrive, and the role the US government can play in helping make that possible through innovation.

In anticipation of the launch of the G-FINDER report the following day, Dr. Nick Chapman, director of research at Policy Cures and the report’s lead author, previewed key findings from this year’s report. The report found that funding for neglected disease R&D increased in 2014, but that increase was entirely the result of increases in funding for Ebola R&D in response to the West African Ebola crisis. Non-Ebola R&D funding actually decreased slightly from the previous calendar year. 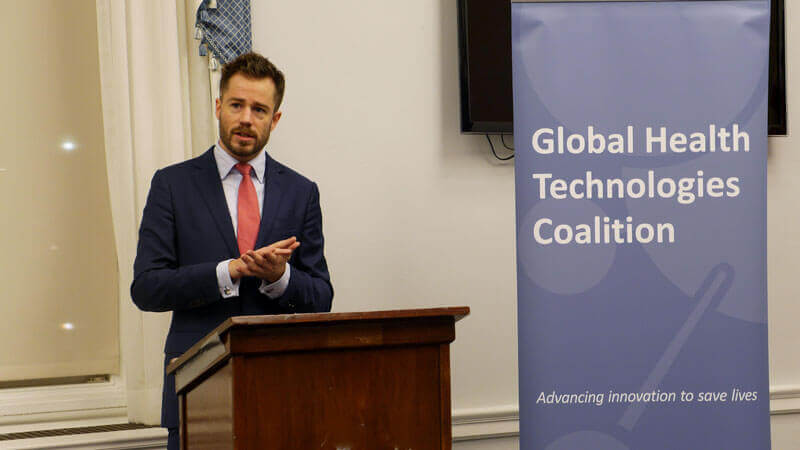 Dr. Chapman also emphasized the critical role the US plays in neglected disease R&D, noting that the “US government is the single most important funder of global health R&D.” This year’s report found that the US government was responsible for 71 percent of all investment in neglected disease R&D. While Dr. Chapman said this leadership should be celebrated, he also noted that US investment has largely been on the decline over the last several years with non-Ebola R&D investment declining in 2014 to the lowest level since the survey began in 2007. Given the US’s dominant role in this area, continued cuts or stagnation in US funding could lead to significant detrimental impacts on neglected disease R&D overall. 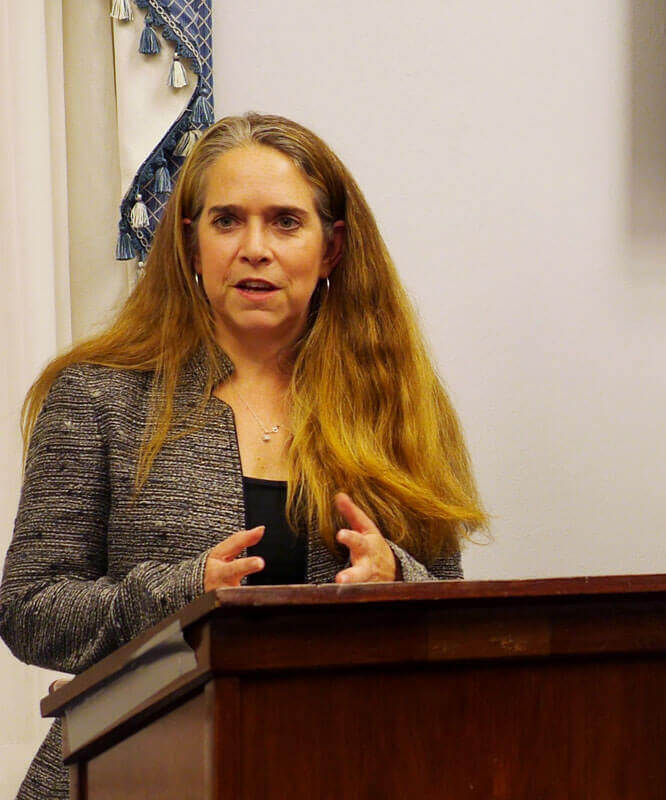 Wendy Taylor, director of the Center for Accelerating Innovation and Impact at the US Agency for International Development (USAID) echoed statements from other speakers on the need to sustain health R&D investment, emphasizing that the gains we are seeing now in global health are the result of investments made decades ago. She highlighted the importance of partnerships in advancing product development, citing USAID’s work with the private sector and product development partnerships, and the importance of sourcing innovative ideas from all over, highlighting success stories from USAID’s Saving Lives at Birth Grand Challenge Program.

Written by Kat Kelley / GHTC
Read time:
Photo credit: TB Alliance GHTC member TB Alliance announced last week the creation of the first-ever child-friendly tuberculosis (TB) medicines, which are currently undergoing regulatory review by the World Health Organization and should be available in early 2016. While TB is curable, a patient must take multiple drugs a day for six months, and existing medicines are not available in appropriate doses for children. Consequently, parents must crush or cut the pills. This arduous process—combined with the bitter taste—makes the six-month regimen difficult to follow. The new treatment is comprised of strawberry- and raspberry-flavored, child-friendly doses of the three most commonly used TB medicines. The new regimen is expected to significantly enhance adherence to treatment for the 1 million children diagnosed with TB each year. Researchers at Texas A&M University have developed a device that, when attached to a smartphone, can diagnose malaria in minutes. Using a polarized light and the phone’s camera, the device serves as a microscope. The photos taken by the device are then analyzed by a software app that diagnoses infection by counting both red blood cells and Hemozoin crystals, which are produced by the malaria parasite. The device, which is expected to cost less than US$50 and be used with cartridges costing $1 each, will be tested in Rwanda next summer. A preclinical study conducted by GHTC member Population Council in partnership with CONRAD suggests that candidate microbicide gel MZC could be even more effective against HIV than tenofovir gel, a leading microbicide candidate. Containing a potent antiretroviral, a zinc-based salt, and the compound carrageenan, the gel is intended to protect against HIV, human papillomavirus (HPV), and herpes simplex virus 2 (HSV-2). The study demonstrated that MZC was more potent than tenofovir against both HIV and HSV-2. While the study did not test the gel’s efficacy against HPV, existing research suggests that carrageenan is one of the most potent compounds against HPV. Next, MZC will be tested in delivery systems, including vaginal rings and rectal gels, as well as in combination with a hormonal contraceptive. In other microbicide news, GHTC Member the International Partnership for Microbicides (IPM) has entered an agreement with pharmaceutical company Janssen Sciences that provides IPM the rights to develop a microbicide using the antiretroviral darunavir, which is currently available in pill form and marketed as PREZISTA®. IPM is also conducting a phase III clinical trial of a vaginal ring using antiretroviral dapirivine, licensed to the organization through a partnership with Janssen initiated in 2004.
MMV

Written by Kat Kelley / GHTC
Read time:
Pyramax® Granules (Photo: MMV) After four successful Phase 3 clinical trials enrolling more than 3,500 patients in 18 countries, the European Medicines Agency (EMA) has granted Pyramax® Granules, a pediatric malaria medicine, a positive opinion under Article 58—a mechanism through which the EMA reviews and issues a scientific opinion on products that are not intended for use in Europe. Pyramax® Granules is a combination of two antimalarials and was developed by Medicines for Malaria Venture (MMV), a member of the GHTC, in partnership with Shin Poong Pharmaceutical Co. Ltd. The treatment is designed to be easy for children to consume: its bitter taste is masked and it is taken in liquid form, as children often struggle to swallow pills. Next, MMV and Shin Poong will work to introduce Pyramax® Granules as well as Pyramax®, the tablet version which is suitable for adults, in malaria-endemic countries. A recent article in NPR: Goats & Soda examines Zika virus, a disease transmitted by the same mosquito vector of dengue fever and chikungunya, that has been rapidly spreading throughout South America and the Pacific Islands in recent years. One in five individuals infected with the virus experience Zika fever, which in addition to fever involves rashes, joint pain, conjunctivitis, headaches, vomiting, and muscle pain. Cases of Zika fever are likely underdiagnosed, as awareness of the disease is limited and its symptoms are similar to infections associated with other members of the Flaviviridae virus family, including dengue fever, yellow fever, West Nile, and Japanese encephalitis. There are no reported deaths to date, but there is growing evidence that the virus can be transmitted sexually or from mother to infant during pregnancy. As there are no vaccines or drugs for Zika fever, treatment involves addressing the symptoms, using fever reducers and painkillers. A group of global health advocacy organizations—including GHTC members the Drugs for Neglected Diseases initiative, TB Alliance, Infectious Diseases Society of America Center for Global Health Policy, Sabin Vaccine Institute, and Treatment Action Group—sent an open letter to the US Senate Health, Education, Labor and Pensions (HELP) committee, calling for amendments to the priority review voucher (PRV) program at the US Food and Drug Administration (FDA) to ensure it adequately incentivizes research and development (R&D) for neglected diseases, as intended. Under the program, companies that receive FDA approval for a drug for a neglected disease (see list of eligible diseases) are awarded a voucher for expedited FDA review (six months rather than ten) of a future product. The vouchers are transferable and have been sold at increasing rates, the most recent going for US$350 million. The letter calls for PRVs to only be awarded for products that are "truly new" as two of the six vouchers that have been awarded were for products that had long been in use outside of the United States.[1] The organizations are also calling for recipients of the voucher to be required to develop a strategy to ensure the product is made affordable and accessible to patients in the countries in which the eligible disease is endemic. The United Kingdom (UK) announced last week the creation of the Ross Fund which will provide £1 billion ($1.5 billion) over five years to fight malaria and other infectious diseases. The funding, which will come from the UK overseas aid budget, includes £90 million for malaria eradication; £100 million for infectious disease R&D; £115 million for the development of drugs, diagnostic, and insecticides for malaria, tuberculosis, and other infectious disease resistance; and £188 million for biodefense and rapid response systems for epidemic preparedness. Global Good has developed a cooler that can store and transport vaccines at freezing temperatures for over a month using just ice and no electricity. The Arktek cooler uses vacuum thermal insulation, an approach used to preserve spacecraft entering extreme temperatures. The cooler has been tested in Senegal (with support from GHTC member PATH) and Ethiopia, and last year, the Arktek was modified for use in Ebola vaccine clinical trials, during which the cooler kept the vaccines between -76 and -112 degrees Fahrenheit for three days. [1] There are two separate PRV programs at the FDA, one for neglected tropical diseases and one for rare pediatric diseases. Of the six PRVs that have been awarded, three each have been for neglected tropical diseases and rare pediatric diseases. Since the beginning of the PRV program, six PRVs have been awarded—three for neglected tropical diseases and three for rare pediatric diseases.