Better together? Five takeaways on the proposal for a WHO pooled fund

Last week, GHTC convened a panel of experts to dissect and discuss a proposal for pooled funding for global health research and development (R&D). 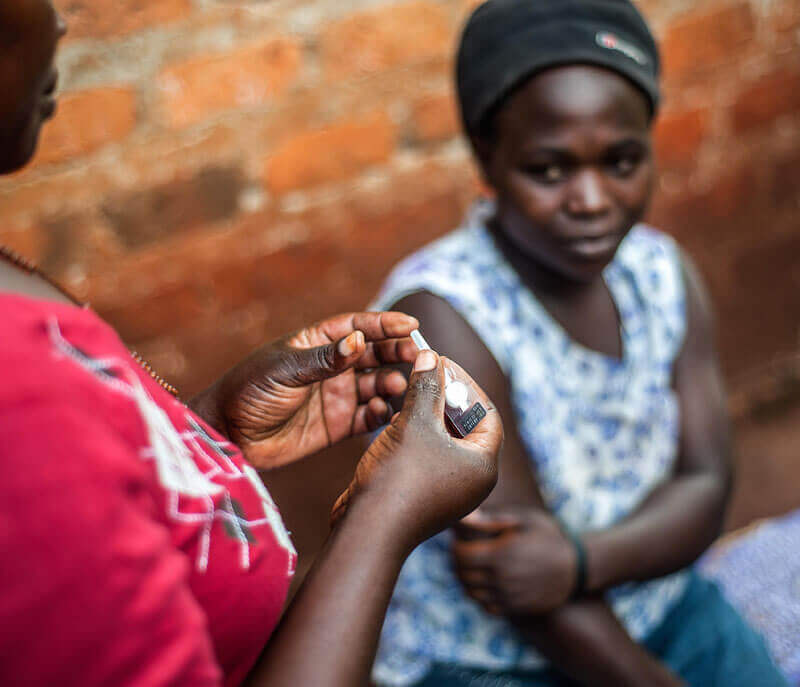 Photo: PATH/Will BoaseLast week, GHTC convened a panel of experts to dissect and discuss a proposal for pooled funding for global health research and development (R&D). The result of many years of brainstorming and negotiating by the World Health Organization (WHO) Consultative Expert Working Group on Research and Development (CEWG), the fund would finance neglected disease R&D at WHO’s Special Program for Research and Training in Tropical Diseases (WHO-TDR).

Based on the discussion, here are my five key takeaways.

1. It has been a long process and the proposal has shifted over time.

A pooled R&D fund and global health observatory are the end products of a decade-long debate rooted in the struggle to expand access to antiretroviral treatment in the early 2000s. This movement led to the Doha Declaration on TRIPS and Public Health—which permitted member states to circumvent patents to expand access to medicine. Rachel Cohen, Regional Executive Director at Drugs for Neglected Diseases initiative North America, noted, “There was a growing recognition in the early 2000s of the failure of the R&D system to deliver, particularly for diseases that really fell outside the market.” Cohen further remarked, “That really produced the political impulse to start the process.” As a result of this movement, the CEWG was established in 2010 to look at ways to finance R&D for neglected diseases. The CEWG initially proposed establishing a global treaty requiring member states to dedicate .02 percent of their gross domestic product to health R&D with 20 percent of the amount raised through the treaty going to a pooled fund for neglected diseases. Over time the challenges of a treaty became clear, and the goal shifted to the current proposal to create a voluntary fund.

While much of the public discussion has focused on the pooled fund, there are actually two components to the proposal: the pooled fund and an R&D observatory. The observatory would serve as an online compendium of all target product profiles (TPPs) for neglected disease products in the global pipeline. Given that TPPs contain comprehensive information on product candidates, including target pricing, target markets, access considerations, and other details, the observatory would give a comprehensive picture of the gaps in the global product development pipeline. Having identified these gaps, the public health community could then convene a dialogue to determine the most pressing priorities for research. Once those priorities are identified, the pooled fund would be deployed to fund R&D for products addressing the needs identified.

3. Sufficient funding is not guaranteed, and the space is already crowded.

WHO-TDR has modelled a variety of scenarios on what the fund could finance. Depending on the level of resources raised, the pooled fund could support R&D projects ranging from developing a limited number of simple repurposed drugs for around US$15 million per year to developing novel biologics and new chemical entities for around $500 million per year. While the hope is that a pooled fund would attract contributions from low- and middle-income countries that might not be able to fund their own freestanding R&D programs, it is unclear how much the fund could raise even with matching funds from existing donors. Furthermore, given that all contributions are voluntary, the fund would need to actively fundraise to support its work, which requires additional staff and resources purely devoted to these activities.

According to Andrea Lucard, Executive Vice President of Medicines for Malaria Venture, concerns persist that “this actually may increase fragmentation” for R&D funding. Lucard asks further, “Are we at risk of siphoning off funds that exist from donors that are already there or donors that are close to being able to fund [existing] dynamic successful organizations?” 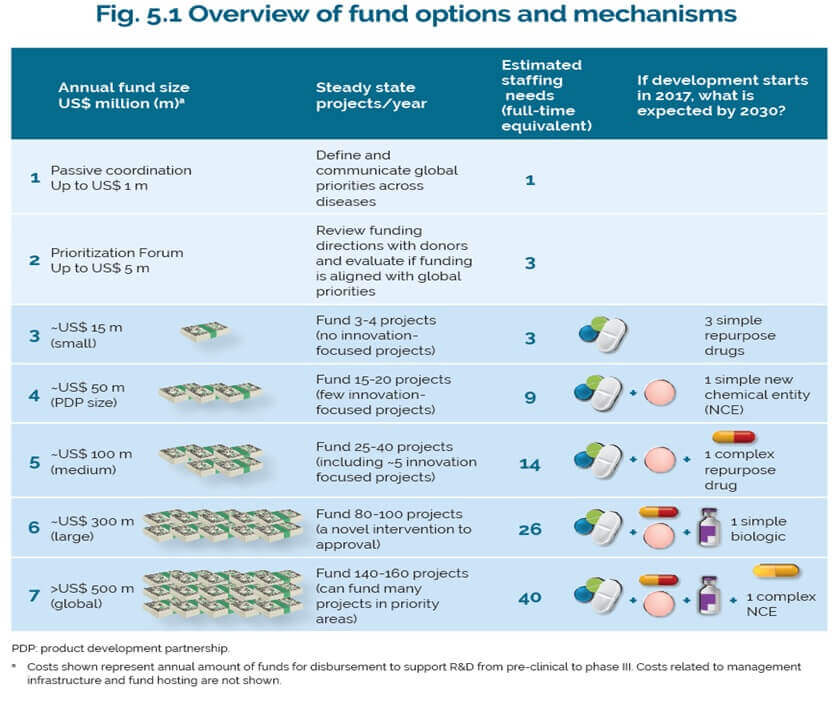 4. The necessity of fundraising risks mixing the technical with the political.

5. The observatory and pooled fund are only one approach to increasing access to medicines.

While the pooled fund and observatory could potentially improve access to medicines by mobilizing more funds to directly finance R&D for neglected diseases, they would still operate within the existing overarching framework governing global health R&D. Rachel Cohen commented that the only way the pooled fund would be successful is if it is “based on a financing of R&D that disconnects, or de-links the cost of R&D from the pricing of final products.” This reflects the broader debate within the global health R&D community over exactly how to reform current policies to better promote access to medicines.

The next step in the process is an open-ended meeting on May 2-4 where WHO-TDR will formally present its proposal for the observatory and pooled fund to WHO member states, who will then decide whether to move forward with a World Health Assembly resolution. Prior to that meeting, we expect that the full report and dataset underpinning WHO-TDR’s analysis will be published on March 17th.

Research Roundup: A novel single-pill HIV treatment, a promising Ebola therapy, and a collaboration between...

Written by Kat Kelley / GHTC
Read time:
Photo: PATH/Map Photo Agency Gilead Sciences, a California-based biopharmaceutical company, has received US Food and Drug Administration (FDA) approval for Odefsey®, a complete, single-pill regimen for HIV and AIDS. Odefsey® contains tenofovir alafenamide (TAF), a modified version of the antiviral tenofovir, used to treat HIV and AIDS and hepatitis B. TAF is highly effective at entering HIV cells, and thus can be administered in doses a mere ten percent of that required for tenofovir-based medicines. Gilead also recently received a positive opinion from the European Medicines Agency (EMA) on Descovy, another TAF-based treatment. The EMA’s recommendation will be evaluated by the European Commission, which can grant regulatory approval for the 28 European Union member states. Prior to the 2014 Ebola outbreak, the experimental therapy ZMapp had only been tested in non-human primates. The therapy, which is comprised of three antibodies against the virus, is particularly difficult to manufacture, and thus only seven patients received ZMapp during the outbreak. Now, results of the first human clinical trial of ZMapp affirms that the treatment could be an important tool in fighting Ebola. The randomized control trial was conducted by the US National Institute of Allergy and Infectious Diseases (NIAID) in partnership with the governments of Guinea, Liberia, and Sierra Leone. As the spread of Ebola slowed, so too did new cases, and thus the partners could only enroll 72 patients, one-third of the 200 for which they had planned. In the study, all patients received supportive care, including provision of fluids and electrolytes, and half of patients received three doses of ZMapp. Patients receiving ZMapp recovered much faster, in terms of symptoms and presence of the virus in the blood, and the fatality rate was lower for ZMapp recipients: 22 versus 37 percent. Despite the small trial size, NIAID Director Dr. Tony Fauci is optimistic that the FDA will “favorably consider” the results, in light of the dearth of approved Ebola treatments and positive animal study results, in which the drug was 100 percent effective. A team of Google engineers is working with the United Nations Children’s Fund (UNICEF) to develop a platform to track and predict the spread of Zika, a mosquito-borne virus linked to birth defects that was recently declared a Public Health Emergency in Latin America. The platform uses data such as weather and travel patterns to anticipate communities at-risk for Zika, and will be adaptable for use in other outbreaks. Google is also providing a US$1 million grant to UNICEF for mosquito control and behavior change efforts, with the goal of reaching 200 million people throughout the Americas. The company is also working to ensure that helpful, accurate information is readily available to all using the search engine, adding detailed information in 16 languages on Zika prevention and symptoms as well as government public health alerts.