Setting the stage: UN High-Level Panel on Access to Medicines to consider IP, trade, human rights, and access to medicine

In November 2015, United Nations (UN) Secretary-General Ban Ki-moon convened a High-Level Panel on Access to Medicines to discuss and develop solutions to promote innovation and access to essential medicines, vaccines, diagnostics, and other health technologies needed to ensure health and well-being around the world. 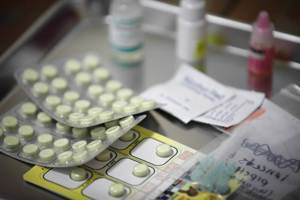 A close-up of packets of pills. (Photo: PATH/Christopher Nelson)

In November 2015, United Nations (UN) Secretary-General Ban Ki-moon convened a High-Level Panel on Access to Medicinesto discuss and develop solutions to promote innovation and access to essential medicines, vaccines, diagnostics, and other health technologies needed to ensure health and well-being around the world. This panel comes on the heels of the UN General Assembly formally adopting the Sustainable Development Goals (SDGs)—goal three of which is to “ensure healthy lives and promote well-being for all at all ages”—and is designed to consider ways in which intellectual property (IP) protections, trade rules, and international human rights law might affect global access to medicine and the ability of the international community to achieve SDG three by 2030.

The panel also comes at a time when the United States and the international community are considering one of the most ambitious trade agendas in the last several years. The Trans-Pacific Partnership (TPP), the largest regional trade agreement in history, linking 11 Pacific-rim countries that make up 40 percent of the world’s economy, was finalized in October 2015 and is currently under review by the US Congress. The agreement has stronger IP protections for pharmaceutical products than those included in previous regional and bilateral trade agreements—including twelve years of data protection for new biologics and the ability to evergreen certain pharmaceutical patents—which may impact timely access to generic medicines in TPP countries. The US is also in the process of negotiating the Trans-Atlantic Trade and Investment Partnership (TTIP), which would reduce tariffs and codify trade-related standards between the United States and the European Union. Details of this agreement have not yet been made public. (To read more about the potential impact of TPP on access to medicine, visit GHTC’s blog .)

Though minimum standards for patents and IP protections have been included in trade agreements since 1995, when the Agreement on Trade-Related Aspects of Intellectual Property Rights (TRIPS) was approved by the World Trade Organization (WTO), certain actions have carved out exceptions to protect public health and support low- and middle-income countries. The Doha Declaration on TRIPS and Public Health formally clarified that TRIPS IP protections for pharmaceuticals should not prevent countries from protecting public health and promoting access to medicine. It also affirmed flexibilities for least developed countries (LDCs), as designated by the UN, to gradually enforce IP protections for pharmaceuticals, including provisions around compulsory licensing of generic medications, and established January 1, 2016, as the deadline for LDCs to implement enforcement of pharmaceutical patents. The US May 10th Agreement established congressional intent for TRIPS flexibilities, as expressed in the Doha Declaration, to be reflected in all US trade negotiations.

With the on-ramp for LDCs to enforce pharmaceutical patents set to expire at the start of the new year, in November, the WTO committee on IP rights agreed to extend the provision allowing LDCs to avoid applying and enforcing IP rights on pharmaceutical products until 2033. In a June 2015 letter to the WTO, advocates argued that, “Many LDCs (at least 25 countries) have relied on the…pharmaceutical product [exemption] to declare patents unenforceable as well as to exempt pharmaceutical products from patent and test data obligations, thereby allowing them to import critical treatments such as medicines for their national HIV and AIDS treatment programs” at affordable prices. Because “the public health crisis in LDCs is a long-term challenge that will endure at least as long as these countries remain LDCs,” an extension of the on-ramp is critical to “provide suppliers, procurers and donors of affordable medicines in LDCs the clarity and certainty to confidently manufacture, export and import generic medicines.” Countries with strong pharmaceutical industries, like the United States, negotiated to make the extension time-bound to 2033 in lieu of the permanent extension sought by LDCs and their advocates.

It is with this backdrop that the UN High-Level Panel on Access to Medicines begins its work. The UN Secretary-General has appointed members of the panel—with representatives from both developed and low- and middle-income countries. Further, a group of expert advisors—from civil society, the private sector, and academia—has been established to help guide the Panel’s work. Several documents including a Report on HIV and the Law are cited as background for the Panel’s work. After the first in-person meeting of the panel in December, the group opened a call for contributions by interested stakeholders “that address the misalignment between the rights of inventors, international human rights law, trade rules and public health where it impedes the innovation of and access to health technologies.” The panel will discuss these contributions at two public hearings in March, which will help to guide the development of their formal report to the Secretary-General, expected to be finalized in early June.

To ensure that essential global health technologies get into the hands of populations in need, promoting access to medicines and global health tools is just as critical as supporting the research and development that drives these new innovations. GHTC will be closely monitoring the work of the High-Level Panel and looks forward to contributing to the public hearings in March.

Written by Kat Kelley / GHTC
Read time:
Photo: CDC Vaccines The US National Institutes of Health (NIH) is ramping up research for a vaccine against Zika, a mosquito-borne virus which is “spreading explosively” throughout the Americas and can cause birth defects, including microcephaly, which is associated with stunted head and brain development in newborns. The NIH will be offering new funding for Zika research and supplementary funding will be available for researchers studying similar viruses, including West Nile, dengue, and yellow fever. The NIH plans to initiate clinical trials of a Zika vaccine by the end of this year, and currently has two potential candidates, one resulting from research into West Nile virus. The Brazilian government is also supporting Zika vaccine research and development (R&D), but despite its commitment to developing a vaccine “in record time,” the process will take at least three to five years. GlaxoSmithKline is conducting feasibility studies to determine if its existing vaccine technology could be used to develop a Zika vaccine, however, the company warns it could take ten to fifteen years. Inovio Pharmaceuticals and GeneOne Life Science are initiating research to develop and test a DNA-based Zika vaccine, building on their current partnership for Ebola and MERS vaccine R&D. Treatment There are currently no available therapies for Zika disease and the US Centers for Disease Control advises treating the symptoms by resting, hydrating, and taking medicines for the fever and pain. The National Institute of Allergy and Infectious Diseases (NIAID) at NIH is testing Zika drug candidates. In light of the paucity of treatment options, NIAID Director Dr. Anthony Fauci is calling for a shift in the drug development “one-bug–one-drug approach,” noting that recent pandemics have demonstrated the need for antivirals effective against entire classes of viruses. Diagnostics Point-of-care diagnostics are “the first line of defense in these outbreaks,” according to FIND Chairman Mark Kessel, as rapid, accurate diagnosis is needed to “identify, treat and track the outbreaks to minimize the deaths and costs to the world economy.” Currently, the standard approach for diagnosing Zika takes place in laboratory settings, and involves looking for the virus’ RNA in a blood sample, however the RNA only remains in the blood for a short period of time, and by the time the symptoms begin (3 to 12 days after infection), it may be too late. As exposure to Zika virus during pregnancy can lead to birth defects, scientists are also interested in diagnostic approaches that can test for past infections in newborns, however the leading method requires access to the live virus and advanced safety conditions not found in most labs. When testing for antibodies against the virus in blood samples, differentiating between related viruses can be difficult, and Zika is primarily found in areas in which the related dengue virus is endemic. Despite these limitations, several diagnostics that test for antibodies against Zika are already on the market. Most notably, the Canadian diagnostic company Biocan launched a rapid Zika test in December that takes just ten minutes, and uses a finger prick to collect blood, making it safe for use in the field. Biocan is also launching the Tell Me Fast Dengue/Chikungunya/Zika Virus Combo Rapid Test, which as the name suggests, can detect dengue, chikungunya, or Zika virus. Researchers at the University of Texas are developing a “cheap, portable box” that detects Zika virus DNA. The team has developed a prototype and is seeking additional funding for continued development and testing. The box structure enables testing of mosquitos for Zika virus, and could allow scientists to detect an outbreak early, rather than relying on reported cases in humans. Vector Control Without approved vaccines or drugs, and limited point-of-care diagnostic options for Zika virus, public health officials are calling for heightened mosquito control efforts. British biotechnology company Oxitec is testing genetically modified mosquitos to reduce the population of the Aedes aegypti mosquitos which transmits Zika, as well as dengue and chikungunya. Oxitec’s mosquitos are engineered to produce larvae that are unable to mature to adulthood, and in an ongoing trial in Piraciaba, Brazil, the introduction of the engineered mosquitos has resulted in an 82 percent decrease in A. aegypti larvae in just nine months. In response to the Zika outbreak, Oxitec is expanding its trial and building a new facility to produce the mosquitos. Oxitec is currently seeking approval from the US Food and Drug Administration to conduct additional trials in the Florida Keys. The US government is taking the spread of Zika seriously, and President Barack Obama has called for research into Zika vaccines, drugs, and diagnostics. However, the White House is also emphasizing that the threat from Zika is distinct from that of Ebola. While the risk to women who are or may become pregnant is significant, for others, “the impact of the virus is relatively mild." Are there additional Zika R&D initiatives that we’ve missed? Please send tips to Kat Kelley (kkelley@ghtcoalition.org).