Last week’s World Health Organization (WHO) Executive Board meeting featured agenda items on access to medicines and intellectual property. We cover how debates on these items shook out:

Last week’s World Health Organization (WHO) Executive Board (EB) meeting featured a packed agenda covering diverse topics ranging from WHO’s overall plan of work for 2019-2023 to the global burden of snakebite envenoming—as well as some unexpected chicken dancing by delegates. Given that the EB sets the agenda for May’s World Health Assembly (WHA), the inclusion of an agenda item on access to medicines and WHO’s plan on intellectual property (IP) indicates that we can expect a contentious few months leading to the WHA.

Here is how debates on these agenda items shook out:

For the third consecutive year, the EB addressed the issue of access to medicines and health technologies—a topic that has received much attention in recent years and sparked strong, diverse opinions from member states on how best to address. Last year at the WHA, member states reached a compromise to allow consideration of the findings of the United Nations Secretary-General’s High-Level Panel on Access to Medicines (HLP) at this year’s EB. For the meeting, the Secretariat produced a comprehensive report mapping out WHO’s current activities against the specific HLP recommendations. Though a number of countries objected to this approach on the grounds that it implicitly endorsed the findings of the HLP report, there was broad consensus in the room that access to medicines is a global problem that requires WHO action and that the agency could not afford to delay any longer.

As a result, the EB agreed on a decision point calling for WHO to develop a “roadmap report” outlining WHO’s work plans on access as part of the process of finalizing the overall 2019-2023 plan of work. This report will be submitted to the 2019 WHA. 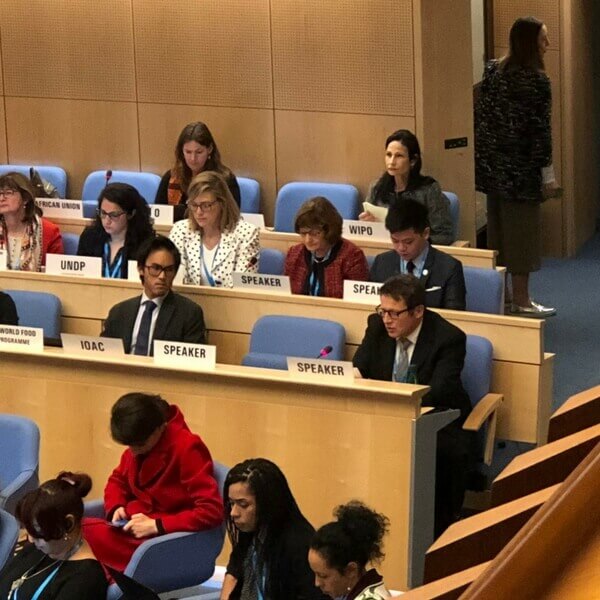 Speakers at the EB, 2018 (Photo: GHTC/Matt Robinson) While the access to medicines agenda item reached a consensus decision more quickly than expected, the debate on IP raged over multiple days during both formal and informal sessions at the EB. The debate ultimately boils down to a divergence between high-income countries—countries with significant pharmaceutical industries—and low- and middle-income countries on whether WHO is an appropriate forum to address IP. Those against WHO taking an active role on IP (including the United States and Japan) argue that the World Trade Organization and the World Intellectual Property Organization are the appropriate forums. On the other side, a coalition of countries led by Brazil and India argue that IP in medicines is a unique category and that international policy must be set with a health perspective first. As the global normative organization for health, WHO is thus the appropriate venue to address IP.

After many days of closed-door negotiations, the board ultimately decided to move forward with a consensus resolution text. It called for member states to implement recommendations from the new WHO report on IP and public health as appropriate for their national contexts and to continue further discussions and for the Director-General to begin implementing the recommendations and submit a progress report to WHA in 2020. Notably, the following provisions were stripped out of the resolution, including calls for member states to:

1. Promote transparency and understanding of research and development costs

3. Commit to dedicating at least .01 percent of gross domestic product to basic and applied research relevant to developing countries

GHTC will continue tracking these issues over the coming months heading into WHA, and we look forward to what will be a spirited meeting in May!

Research Roundup: Understanding the severity of antimicrobial resistance and a request to review a sleeping...

Written by Taylor Capizola / GHTC
Read time:
Interested in more global health innovation news? Every week GHTC scours media reports worldwide to deliver essential global health R&D news and content to your inbox. Sign-up now to receive our weekly R&D News Roundup email. In this regular feature on Breakthroughs, we highlight some of the most interesting reads in global health research from the past week. High levels of antibiotic resistance are present in both high- and low-income countries, according to surveillance data from the new World Health Organization’s (WHO) Global Antimicrobial Resistance Surveillance System (GLASS), which tracked suspected bacterial infections among 22 countries. Across different nations, GLASS found that patients with resistance to at least one of the common antibiotics for blood infections ranged from 0–82 percent. Patients with resistance to penicillin—the most common antibiotic used to treat pneumonia—ranged from 0–51 percent and patients with resistance to ciprofloxacin—a common antibiotic used to treat E. coli associated with urinary tract infections—ranged from 8–65 percent. This data suggests antimicrobial resistance (AMR) is not only a threat to low-resource communities around the world, but also to highly developed areas. WHO hopes the survey will provide a more complete picture of AMR patterns and trends so individual nations and the global community develop and monitor interventions to combat this growing problem. Wellcome Trust has set up a new information-sharing effort—the Surveillance and Epidemiology of Drug-Resistant Infections Consortium (SEDRIC)—designed to help countries track, analyze, and share information about antimicrobial resistance (AMR). SEDRIC will connect experts from around the world to identify gaps in AMR surveillance, improve coordination, and help nations strengthen their data collection capacity. It will also look at ways technology can improve understanding of how pathogens before resistant and how infections spread. The effort will build on the work of the World Health Organization’s Global Antimicrobial Resistance Surveillance System by helping countries builder strong surveillance networks. Pharmaceutical company Sanofi Pasteur has asked the European Medicines Agency (EMA) to review an experimental sleeping sickness medicine developed in partnership with the Drugs for Neglected Diseases initiative. The medicine is a clinically studied, ten-day oral treatment to combat sleeping sickness, a fatal disease endemic to Africa. EMA accepted the request to review under Article 58 and will eventually provide a scientific opinion in cooperation with WHO. This approval is a critical step toward registering the medicine for future use in endemic areas of Africa.
PATH/Satvir Malhotra

Written by Taylor Capizola / GHTC
Read time:
Interested in more global health innovation news? Every week GHTC scours media reports worldwide to deliver essential global health R&D news and content to your inbox. Sign-up now to receive our weekly R&D News Roundup email. In this regular feature on Breakthroughs, we highlight some of the most interesting reads in global health research from the past week. The World Health Organization has prequalified Bharart Biotech’s rotavirus vaccine—ROTAVAC—enabling United Nations agencies and GAVI, the Vaccine Alliance to purchase the vaccine for use in low-income countries (LIC). Bharat is currently supplying the vaccine to LICs at one US dollar per dose and expects to be able to reduce the price if a threshold of doses are purchased. Rotavirus is the leading cause of severe diarrhea and death in children younger than five years. ROTAVAC presents a new low-cost vaccine option to prevent rotavirus and is the first licensed rotavirus vaccine to be developed using a strain of the virus isolated, manufactured, and tested in India. A team of scientists have sequenced and analyzed genomes of multiple leprosy strains from around the world in an attempt to understand previously unknown mechanisms of drug resistance. Scientists found many of the genomes harbored large numbers of random mutations, explaining why many strains of the disease have become resistant to commonly used medicines. Leprosy is a painful disease that affects over 200,000 people every year, causing major damage to the skin, nerves, and eyes. Understanding the genomic structure and mutations of leprosy will aid scientists in developing effective treatments for leprosy and drug-resistant leprosy. Researchers at the University of Liverpool and the Johns Hopkins School of Medicine have developed a long-acting injectable form of malaria medicine that could simplify and improve malaria prevention. The scientists used nanotechnology—or the manipulation of matter on an atomic or molecular scale—to improve the delivery of an existing antimalarial through a new injectable formulation that can maintain blood concentration of the drug for weeks or months. Once injected into the muscle, this delivery method establishes a medicine depot that releases the antimalarial into the bloodstream over an extended period of time. Malaria chemoprophylaxis—the administration of antimalarial drugs prior to potential exposure—is a common malaria prevention strategy, but it requires patients take medicine daily to be effective. While still in the early stages of development, this new long-acting medicine could offer an alternative approach that may help patients improve adherence.