At his nomination hearing, Secretary of State–designee Rex Tillerson was questioned on women’s empowerment, family planning, development aid, and the President’s Emergency Plan for AIDS Relief (PEPFAR). GHTC covers what he had to say. 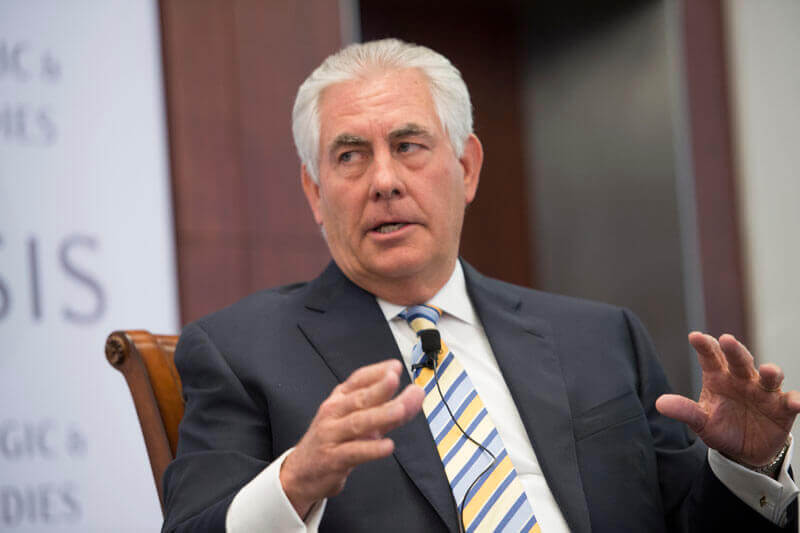 Secretary of State–designee Rex Tillerson. Photo: Center for Strategic and International StudiesWednesday’s nomination hearing for Secretary of State–designee Rex Tillerson provided an opportunity for the global health community to learn more about his views on the United States’ role in international development and global health.

While the majority of the hearing highlighted policy toward Russia, human rights, global terrorism, and how Tillerson’s professional experience in the oil industry will impact his role as chief foreign policy advisor to the President, Tillerson was also questioned on women’s empowerment, family planning, development aid, and the President’s Emergency Plan for AIDS Relief (PEPFAR).

Here’s what he said:

In response to Senator Shaheen’s (D-NH) question on whether he would support programming to increase women’s empowerment, Tillerson described how these types of programs had been a priority for the Exxon Foundation and cited a program Exxon supported in Papua New Guinea. He committed to continuing these programs, noting “I think it’s an important part of our foreign aid assistance efforts, whether it’s through the USAID [US Agency for International Development] or whether it’s through other opportunities we have in more structured ways.”

Senator Shaheen also pushed Tillerson on family planning and reproductive health, asking if he would pledge to “continue to prioritize quality family planning and reproductive health services for women worldwide, and ensure that resources and access to these programs are not conflated with support for abortion.” Tillerson responded that he was aware that the United States spends roughly a half a billion dollars per year on family planning aid, and he thinks this level of funding is “an important level of support.” Asked whether his answer represented a pledge to continue this commitment, Tillerson deferred, and said he would examine these programs further, if confirmed.

Senator Flake (R-AZ) discussed the role of soft diplomacy with Africa and USAID programs, questioning what works and what doesn’t. Tillerson replied that it is important that US assistance be used to nudge countries toward diplomacy, punish countries when required, and encourage cooperation. He noted that USAID has two important streams of assistance: disaster relief, to address immediate suffering, and development assistance, which is important for achieving lasting change. He said that recently the proportion of disaster assistance relative to development assistance has been growing, which constrains the government’s ability to use aid as a tool for change. He suggested when possible, the United States should tie assistance to behavior change and then follow up. He also said that assistance should be targeted, designed to support American values, and help countries continue their own development. He noted that tying aid to governments meeting obligations is hard to do with disaster relief, and that he understands and appreciates this difference.

When questioned about PEPFAR by Senator Flake, Tillerson called it “one of the most extraordinarily successful programs in Africa.” He described how he saw the success of global health programs up close through Exxon’s work to eradicate malaria in central Africa. He noted that PEPFAR broadly has generated much goodwill from Africa and “recognition of the goodwill and compassionate nature of American people,” calling PEPFAR one of the best projections of America to the African people.

Questioned by Senator Markey (D-MA) on his views of PEPFAR and the Global Fund to Fight AIDS, Tuberculosis and Malaria, and his commitment to strengthening these programs in the years ahead, Tillerson replied: “PEPFAR is one of the remarkable successes of the past decade or more…I think what’s notable about PEPFAR is that there are measurable results…I think it serves as a model for us to look to as we’re thinking about other ways in which to project America’s values, project our compassion to want to solve these threats that are in other parts of the world that by and large we’re not threatened by a lot of this here in this country. Malaria was eradicated decades ago, TB well under control, AIDS—great treatment programs are available to people. Projecting that into other parts of the world is a marvelous way to send a message of the compassion of the American people that we care about people’s lives all over the world. So PEPFAR is a terrific model to look at in the future as we look at other areas that may be useful for us to put additional programs in place.”

Written by Kat Kelley / GHTC
Read time:
Surgical masks are a popular accessory worn in public spaces during outbreaks of airborne diseases, however, in reality, they provide limited protection against pathogens; they may trap viruses, but they can’t kill them. Consequently, even just the act of removing the mask can expose the wearer to a virus. A team of scientists at University of Alberta are hoping to change that. They have adapted the standard surgical mask so that it can both trap and deactivate viruses. The inspiration for the mask came from a challenge faced by lead researcher Dr. Hyo-Jick Choi in his work adapting vaccines for oral administration: when liquids (i.e., vaccines) turn into solids (i.e., pills), they crystallize, damaging the viral components that make the vaccine effective. Dr. Choi realized he could turn this challenge into an advantage to target viruses that come in contact with surgical mask. He and his team developed and applied a safe, salt-based solution to the masks. As predicted, when a virus—in this case, influenza—came in contact with the mask, it was destroyed, as the droplet carrying it crystallized. Dr. Choi has received a provisional patent and plans to further advance the innovation. Advocates are calling for greater inclusion of pregnant women in clinical trials, a necessary step to address critical knowledge gaps and improve health care for pregnant women and their fetuses. In the United States, nearly two-thirds of women receive at least one prescription during pregnancy, yet more than 90 percent of drugs approved by the US Food and Drug Administration over the past three decades have not been proven safe for use in pregnancy. The hesitancy to include pregnant women in clinical trials is well-founded: drugs and vaccines can cross the placental barrier, resulting in complications or birth defects. However, pregnant women need safe, effective medicines, and clinical trials ensure that negative side effects are caught early, limiting the number of patients impacted. Further, pregnant women are more susceptible to certain pathogens, and as illustrated by the ongoing Zika outbreak, pathogens can cross the placental barrier too, making treatment during pregnancy all the more imperative. Additionally, women may process drugs at higher rates during pregnancy, consequently requiring higher doses. Advocates argue that while testing experimental drugs in pregnant women is risky, it is much safer than allowing a medicine to enter the market, leaving the decision to physicians and patients. The Defense Advanced Research Projects Agency (DARPA), an entity within the US Department of Defense, invests in high-risk, high-reward research, developing innovative technologies to advance US national security, with its health portfolio spanning research from neural and psychiatric health to infectious diseases. Through its Biological Technologies Office, DARPA scientists are taking an innovative approach to drug development. Rather than relying on chemicals to generate novel drug compounds, researchers are genetically modifying yeast, bacteria, and other microbes to do the job. Already, BARDA’s work with yeast has resulted in nearly 100 new molecules, and officials hope to reach 1,000 over the next three years. DARPA is also devising new platform technologies to expedite the development and improve the efficacy of vaccines against emerging infections. One method uses nucleic acids (i.e., RNA and DNA) to signal to the immune system how to respond to a pathogen, rather than introducing a pathogen and allowing the immune system to learn how to respond on its own. If successful, this technology could be adapted for different diseases and would provide instantaneous protection—a significant advantage as most vaccines take at least two weeks to provide protection.
PATH/Gabe Bienczycki

Written by Kat Kelley / GHTC
Read time:
Scientists at the University of Oklahoma are looking for the next breakthrough drug in an unusual place: roadkill. Every animal hosts a unique microbiome—a community of microorganisms, including bacteria, fungi, and molecules with antibacterial and antifungal properties. The research team is collecting swabs from dead animals found along a state highway and has already discovered two compounds (taken from an opossum’s ear) that could prevent the spread of yeast infections. Hypothermia is a significant driver of morbidity and mortality among babies born prematurely, even though the condition is easy to detect and treat. Detection relies on temperature monitoring, and current standard of treatment is Kangaroo Mother Care (skin-to-skin contact). Now, an electronic alert bracelet is being used to prevent hypothermia among preemies in India. If the infant is healthy, the bracelet flashes a blue light every ten seconds; if the infant’s temperature drops, the light turns to red and an alarm goes off. The single-use device is safe and can be used for a month straight—even at home. Though a daily dose of pre-exposure prophylaxis (PrEP) can prevent HIV infection, stigma, cost, and frequent stockouts can impede adherence to the regimen. While only four doses per week is sufficient to protect men from infection, if women miss a single daily dose, they risk infection. To mitigate these barriers, researchers at Intarcia Therapeutics Inc. are developing an implant that would release PrEP over time, meaning just one visit to the doctor’s office would protect patients for an entire year. The device has already undergone advanced testing and is currently under review by the US Food and Drug Administration for the delivery of diabetes drugs. Researchers at the Center for Infectious Disease Research (CIDR) in Seattle are using mosquitoes, rather than syringes, to deliver an experimental malaria vaccine. The vaccine uses live, but weakened malaria parasites, which can only grow inside living mosquitoes. In an initial trial, ten volunteers were vaccinated, none of whom developed malaria and all of whom produced antibodies that could confer immunity against malaria. The antibodies were extracted from volunteers and successfully used to protect mice against malaria, however, additional trials are needed to determine their efficacy in humans. CIDR is partnering with the Maryland-based biotech company Sanaria to develop a more standard and sustainable vaccine delivery system, producing the weakened parasites and extracting them from the mosquitoes, and attempting to grow the parasites outside of the mosquitoes.