The plague dipstick—Bringing the laboratory to the bedside

In this guest post, Dr. Martin Schriefer, chief of the Diagnostic and Reference Activity in the Bacterial Diseases Branch of the Division of Vector-Borne Diseases (DVBD) in Fort Collins, Colo., writes about his laboratory’s development of a new diagnostic tool, the plague dipstick.

In this guest post, Dr. Martin Schriefer, chief of the Diagnostic and Reference Activity in the Bacterial Diseases Branch of the Division of Vector-Borne Diseases (DVBD) in Fort Collins, Colo., writes about his laboratory’s development of a new diagnostic tool, the plague dipstick. DVBD is one of seven divisions in the Centers for Disease Control and Prevention’s (CDC) National Center for Emerging and Zoonotic Infectious Diseases (NCEZID). His blog is the second in a four-part series from experts at NCEZID.

Uganda is considered a “hot zone” for emerging infectious diseases that have the potential for far- ranging impact. These diseases include Ebola and Marburg hemorrhagic fevers, yellow fever, chikungunya, West Nile virus disease, and plague. The NCEZID has a number of field programs in Uganda to study this unique ecological environment. I have traveled there several times, learning about the health infrastructure and a critical gap in plague diagnostics that was putting people's lives at risk.

Plague is an acute and potentially fatal febrile illness that is harbored in rodents and transmitted by fleas. In its pneumonic form, plague can be transmitted by aerosol from person to person, resulting in local outbreaks and the risk for global spread. Now rare in the United States, plague remains a real threat to human health in sub-Saharan Africa and Madagascar. These regions account for more than 95 percent of the world’s reported plague cases. Fatality rates for untreated infections range from 50 percent to 60 percent for bubonic plague to nearly 100 percent for pneumonic infections. 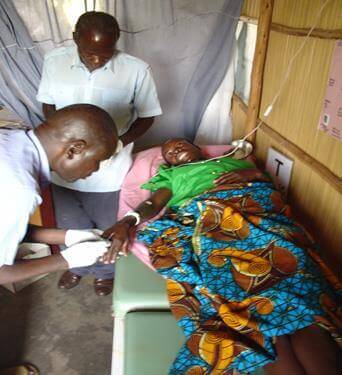 In my laboratory, a team of CDC researchers has developed, manufactured, and field-tested a rapid, affordable diagnostic tool—the plague dipstick. The point-of-care plague dipstick, which works like a pregnancy test, brings the laboratory to the bedside. In September 2012, we delivered a supply of dipsticks to Uganda in anticipation of the 2012-2013 plague season.

At the plague field station and several local health clinics, the plague dipsticks are providing significant improvements in terms of time, ease of use, storage, and handling. Healthcare workers have been trained in the collection of blood, lymph node aspirate, or sputum from suspected plague patients and the application of these samples to the dipstick. Results are visualized in 15 minutes. During a recent outbreak involving four patients and three deaths, the dipstick successfully diagnosed a pneumonic plague patient, allowing rapid prevention measures to 130 contacts—as a result, no further cases occurred.

Before the dipstick was introduced, early clinical diagnosis of plague was difficult and could delay life-saving treatment. Sending samples away for laboratory verification took weeks. Overcoming barriers to effective diagnosis and timely treatment is a priority for CDC laboratory technicians. Plague dipsticks do not require electricity or refrigeration—a critical issue in an environment where electricity is sporadic. And each test costs less than $1.00 to produce.

However, better diagnostics are not useful in Uganda unless people can access and use them with confidence. Many Ugandans living in more rural, remote areas are unable to trek long distances to find a health clinic and visit “traditional healers” instead. CDC has been working with field staff to train local healers to recognize plague symptoms and its effects on rats and to refer cases of plague to local clinics as necessary. 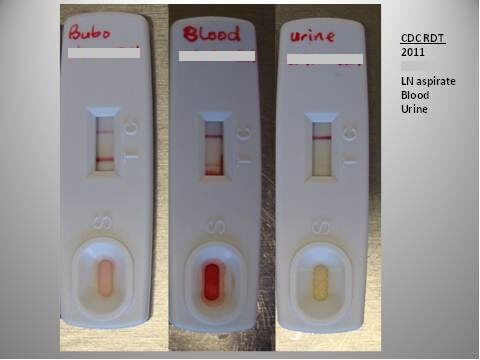 Healthcare workers can be quickly trained to apply blood or lymph node aspirate to the dipstick, which yields results in 15 minutes. The dipsticks do not require electricity or refrigeration— important in an environment where electricity is sporadic. Photo Credit: NCEZID

By educating healers in plague recognition, CDC is helping them to better protect their villages from this deadly disease. NCEZID’s highly innovative programs in Uganda are saving lives with early detection and response. They serve as an important source to strengthen the country’s public health capacity and better prepare for potential bioterrorism events in the United States. The plague dipstick is now being submitted to the US Food and Drug Administration for 510(k) clearance, which is the next step in showing the dipstick to be a clinically validated, sensitive, and specific test.

Martin Schriefer is Chief of Diagnostic and Reference Activity in the Bacterial Diseases Branch of the Division of Vector-Borne Diseases at the US Centers for Disease Control and Prevention's National Center for Emerging and Zoonotic Infectious Diseases.

Written by Nick Taylor / GHTC
Read time:
In this regular feature on Breakthroughs, we highlight some of the most interesting reads in global health research from the past week. The National Institutes of Health has released a fact sheet on the impact of sequestration. The fact sheet states that, due to budget cuts, approximately 700 fewer research project grants will be awarded this year compared to fiscal year 2012. New statistics show that the vaccine MenAfriVac™—developed through a partnership between the World Health Organization and PATH—has significantly reduced the number of cases of meningitis A in Africa. The most recent meningitis season marks the lowest number of cases in ten years. Scientists at Virginia Tech and the University of Florida are making progress in developing a new species-specific insecticide that would be lethal only to insects that carry malaria. Though they have seen positive results, the scientists still think it will be four to five years before they are ready to submit the compound for federal approval. Drugmakers in Japan have agreed to release data on experimental compounds for possible use to create drugs to combat malaria, tuberculosis, and neglected tropical diseases. The pharmaceutical companies are part of a five-year partnership called the Global Health Innovative Technology Fund.
PATH/Wendy Stone

Written by Nick Taylor / GHTC
Read time:
In this regular feature on Breakthroughs, we highlight some of the most interesting reads in global health research from the past week. Marking the 10th anniversary of the President’s Emergency Plan for AIDS Relief (PEPFAR), US Global AIDS Coordinator Ambassador Eric Goosby, and National Institute of Allergy and Infectious Diseases Director Dr. Anthony Fauci, write about how scientific innovation has played an important role in the successes of PEPFAR over the last decade. New resources from the Kaiser Family Foundation analyze the President’s fiscal year 2014 budget request and the funding implications for global health and HIV and AIDS. Member States at the 66th World Health Assembly approved the Consultative Expert Working Group on Research and Development (R&D): Financing and Coordination resolution that would establish a global health R&D observatory, set up demonstration projects, and develop norms and standards to better collect data on health R&D. GHTC member Aeras has launched a short film series called EXPOSED bringing attention to the global tuberculosis epidemic and the need for new tools to prevent this airborne disease’s spread.