In the fight against tuberculosis (TB), October 2016 will be remembered best as a month that delivered two sobering wakeup calls. First, the World Health Organization (WHO)—citing new surveillance data released by the Indian government—announced that the TB epidemic is larger than previously estimated: TB killed 1.8 million people and caused 10.4 million to fall ill in 2015. Second, Treatment Action Group (TAG) released its 11th annual Report on Tuberculosis Research Funding Trends, showing that funding for TB research and development (R&D) in 2015 fell to its lowest level in seven years, declining by US$53.4 million from the prior year. This juxtaposition between rising estimates of TB mortality and morbidity and diminishing investment in the research required to overcome TB suggests that countries have yet to mobilize in pursuit of the ambitious targets of WHO’s End TB Strategy, which sets a vision to achieve a world free of TB by 2035.

The action needed is clear: governments must make deliberate, concerted efforts to overcome the deep funding deficit inherited from the five years preceding the End TB Strategy’s launch. The Stop TB Partnership’s Global Plan to Stop TB, 2011–2015 estimated that the world needed to spend $9.84 billion on TB R&D between 2011 and 2015 to enable the scientific advances in TB prevention, diagnosis, and treatment required to end TB as a public health threat. TAG’s most recent report presents new data on TB research funding in 2015, the fifth and final year of the Stop TB Partnership’s 2011–2015 Global Plan, and, in closing out this five-year reporting period, provides a report card on the plan’s financial and scientific milestones.

By both measures, reality fell far short of aspiration. Worldwide, funders invested $3.29 billion in TB R&D from 2011 to 2015, amounting to just one-third of the $9.84 billion target. Instead of narrowing the funding gap, over the five-year period, global investments stalled or fell. Funding declined in three of the past five years, dropping by $36.5 million in 2012, $12.3 million in 2014, and $53.4 million in 2015 (in relation to prior year). The period ended with a lower level of funding than it started ($620.6 million spent in 2015 compared to $675.3 million in 2011; see figures 1 and 2). Compounding this instability, the TB research field remains in the precarious position of relying on just a handful of donors; 57 percent of funding from 2011 to 2015 came from just two organizations—the US National Institutes of Health and the Bill & Melinda Gates Foundation. Over the same period, pharmaceutical industry investments in TB R&D decreased by 40 percent, dropping from $145 million in 2011 to $87 million in 2015. 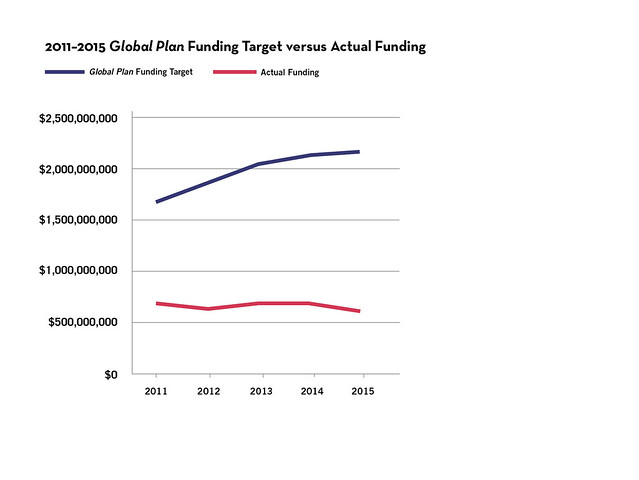 In addition to tracking funding for TB research, TAG analyzed progress in TB diagnostic, drug, and vaccine development. In each field, advances over the past five years came up short against the 2011–2015 Global Plan’s scientific goals (see figures 3 through 5). For example, TB drug developers set a goal of ending 2015 with 21 compounds in phase 1 clinical trials; in fact, the year ended with only 2. Disappointing results published in 2013 from a phase 2b trial of TB vaccine candidate MVA85A meant that instead of advancing four vaccine candidates into phase 3 trials by the end of 2015 as envisioned, the TB vaccine field redirected efforts to earlier stages of discovery and clinical development. TB diagnostic developers made greater progress, but still ended the period without satisfying the goal of delivering a new test capable of diagnosing drug-resistant TB (DR-TB) in peripheral labs and a test able to predict an individual’s risk of progressing from TB infection to active TB disease.

Despite these scientific disappointments and financial shortfalls, the TB research field managed to make several significant advances over the five years including:

Building on these successes in the post-2015 period and putting research on track to meet the long-term goals of the End TB Strategy will require a massive step-up in funding. Most of this additional money will need to come from governments, and this responsibility must be shared by all countries—developed and developing, those with high TB burdens, and those already approaching TB elimination. To this end, TAG has embarked on two advocacy drives to increase public funding for TB research. First, in June 2016, TAG published a policy brief setting the first-ever US government targets for TB R&D funding. The brief calls for US government agencies to spend $300 million on TB R&D by 2017 (enough to pull even with inflation and match 2009 purchasing power) and $400 million by 2020 (enough to outpace the rising costs of biomedical research and increase funding for TB R&D by $72 million in real terms over 2009).

Second, TAG is petitioning leaders of the BRICS countries—Brazil, Russia, India, China, and South Africa—to triple their funding for TB R&D, echoing demands first voiced by the hundreds of people who marched with Treatment Action Campaign in support of TB research in Cape Town, South Africa, in December 2015. As those marchers pointed out, the BRICS countries are home to nearly half of the world’s new TB cases and deaths, yet only provide 4 percent of reported funding for TB R&D. We’ll deliver the petition to BRICS country ministers of health when they meet in New Delhi, India, at the 6th Meeting of the BRICS Health Ministers in December 2016. You can join the call by signing on here.

Posted in: Tuberculosis
Previous Article
Go Back
Next Article