Saving two lives, not just one: medicines for malaria during pregnancy

An estimated 125 million pregnancies around the world are at risk from malaria annually. For both mother and baby, the disease is potentially life-threatening and babies that do survive are often born with low birth weight, which is associated with negative impact on development.

An estimated 125 million pregnancies around the world are at risk from malaria annually.[1] For both mother and baby, the disease is potentially life-threatening and babies that do survive are often born with low birth weight, which is associated with negative impact on development.[2]

These mothers-to-be need medicines to both protect them from getting infected with malaria and to treat them should they fall ill. Yet, these needs remain inadequately addressed.

Medicines for Malaria Venture (MMV) is working with partners to improve the quality of global supplies of the World Health Organization (WHO)-recommended medicine sulphadoxine-pyrimethamine (SP) for use as intermittent preventive treatment in pregnancy (IPTp). As a partner in the Unitaid-funded Jhpiego-led consortium TIPTOP, MMV is supporting improved coverage of SP for IPTp in Africa through community health workers by strengthening the supply side for WHO-prequalified SP.

For women who become infected with malaria during pregnancy, WHO currently recommends artemisinin combination therapies (ACTs) for the treatment of malaria in the second or third trimesters, and quinine with the antibiotic clindamycin in the first trimester. 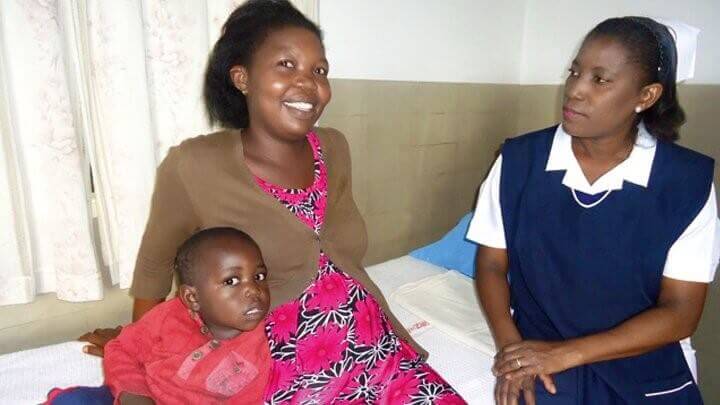 Angela Kangulumais is a primary school teacher in Zambia. She is 6 months pregnant with her second child.  Angela is no stranger to malaria—she fell ill just before her first pregnancy and was treated with an ACT. Pregnant women at risk of malaria like Angela benefit from IPTp to protect themselves and their unborn babies from malaria. Photo: Medicines for Malaria VentureBased on meta-analyses comparing treatment outcomes using the ACT artemether-lumefantrine (AL) versus quinine in first trimester pregnancies and following a recommendation for policy change from an Expert Review Group, WHO is considering whether to recommend the use of all ACTs in all trimesters of pregnancy. That said, the data set regarding the use ACTs other than AL in the first trimester is comparatively small. MMV is working with the Liverpool School of Tropical Medicine’s Timika Research Facility in Indonesia to analyse historical data and to capture new evidence regarding the use of the ACT dihydroartemisinin-piperaquine (DHA-PQP) in the first trimester of pregnancy. These new analyses will contribute to the evidence base regarding safety and tolerability of this ACT during pregnancy.

In addition to expanded use of ACTs for treatment in pregnancy, the malaria research community is also focused on exploring the use of DHA-PQP as a potential substitute for SP for IPTp in the future, should SP’s preventive efficacy decline. MMV is working with the London School of Hygiene and Tropical Medicine in Tanzania on a study to evaluate the cardiac safety of a single course of IPTp with DHA-PQP in pregnant women with and without asymptomatic infection.

For the future, we are also looking at the medicines we have in development and how they might be used for pregnant women. Traditionally, most drugs are tested for safety in pregnancy quite late in development (if at all), since in many therapeutic areas, a product that cannot be used in pregnancy can still have enormous therapeutic value. However, in the case of malaria, the needs of pregnant women are clear and compelling. MMV thus focuses early on in its drug development process to identify molecules that may have an acceptable safety profile in pregnancy. This focus includes conducting standard embryo-foetal development studies in parallel with other non-clinical safety assessment or phase I studies. A favorable safety report early on means that these molecules could be prioritized for development.

In addition, with MMV’s support, a review was carried out and published to help guide the prioritization of antimalarial drugs for development. It detailed the non-clinical safety of all non-artemisinin antimalarial drugs. [3] The article summarized data that was previously not easily accessible to health experts and is helping to guide the development of next-generation antimalarial medicines that could have an appropriate safety profile in pregnant women.

With our partners, MMV is committed to investigating all the avenues to improve pregnancy outcomes for women at risk of malaria. By focusing on protecting and treating pregnant women at risk, we safeguard two lives, not just one.

Dr. David Reddy is CEO of the Medicines for Malaria Venture, a leading product development partnership in the field of antimalarial drug research and development.

Written by Ansley Kahn / GHTC
Read time:
Interested in more global health innovation news? Every week GHTC scours media reports worldwide to deliver essential global health R&D news and content to your inbox. Sign-up now to receive our weekly R&D News Roundup email. Independent experts of a US Food and Drug Administration (FDA) advisory panel voted in favor of TB Alliance’s treatment for multi-drug resistant and extensively drug-resistant tuberculosis (TB)— pretomanid—as part of a three-drug combination regimen with Johnson & Johnson’s bedaquiline and linezolid. Although the FDA is not bound to follow the advice of its advisory panel, it usually does. The FDA granted priority review for pretomanid and the marketing application is based on interim data from the first 45 patients in an ongoing study with a total of 109 participants. Current treatments for TB involve a cocktail of drugs and multiple injections, making adherence difficult for patients. Thus, “having a three-drug oral regimen will be a benefit,” said Philip LoBue, a panel member who voted in favor of the treatment. The FDA is expected to make a final decision on pretomanid’s approval by the third quarter of this year. A new affordable option for combating post-partum hemorrhage—the number one killer of women during childbirth—was announced last week at the Women Deliver conference. The new device, Ellavi, is a high-quality uterine balloon tamponade (UBT) designed for low-resources settings that can be manufactured for US$10, as opposed to a typical cost of $200-250 for a UBT in most industrialized countries. Ellavi, developed by PATH and its South African partner Sinapi Biomedical, has achieved CE marking in Europe, signifying it meets regulatory requirements—an important mark of confidence that eases a product’s path to market in many countries. Ellavi is expected to be on the shelf initially in Kenya and Ghana by 2020, with plans for further expansion. PATH also announced the Nigerian National Agency for Food and Drug Administration’s marketing approval of Caya®—an updated, one-size-fits most, easier to grip, silicone-based diaphragm developed by PATH. Caya® will be introduced in Nigeria within the next year by DKT International, the largest family planning products and services provider in the country. Oxford-based Enesi Pharma has developed a needle-free instrument, called ImplaVax, that can deliver vaccinations under the skin with practically no pain for the patient. Instead of being in liquid form, the vaccine is formed into a tiny, solid stick measuring 0.85mm in diameter and 3.5mm long, with a point at the end, which the ImplaVax device injects into the patient. In addition to being pain-free, this solid dose vaccination does not need to be kept cool—a particular benefit for countries with warmer climates and unreliable cold chains. With ImplaVax, there is also no risk of needle breakage and as a pre-measured solid dose, it is easy to administer, allowing the potential for lower-skilled health workers to administer rather than doctors or nurses. ImplaVax is still being tested in animals with the hope of beginning the first human studies next year.
PATH/Georgina Goodwin

Written by Ansley Kahn / GHTC
Read time:
Interested in more global health innovation news? Every week GHTC scours media reports worldwide to deliver essential global health R&D news and content to your inbox. Sign-up now to receive our weekly R&D News Roundup email. An experimental drug, remdesivir, was shown to protect monkeys against infection with Nipah virus—an emerging pandemic threat for which there is no approved vaccine or cure. The only current treatment is a still experimental monoclonal antibody that was tested during an outbreak in India last year. Remdesivir is also being tested against the Ebola virus in the current outbreak in the Democratic Republic of Congo and has shown some effectiveness against Lassa fever, MERS coronavirus, and respiratory syncytial virus in other studies. In the new study performed by the National Institute of Allergy and Infectious Diseases (NIAID) and the Centers for Disease Control and Prevention, eight African green monkeys were given lethal doses of Nipah virus. The four monkeys who received intravenous remdesivir within 24 hours of infection and daily infusions for 12 days survived, while the four that did not died within eight days. If remdesivir wins approval, “it will give us an extra treatment that could be used relatively quickly,” said Emmie de Wit, a virologist at NIAID, noting that “the average person who reaches a hospital dies within two days, so it’s hard to protect them once they’re infected.” The next step is to test how long after infection the drug can be given and still cure the animals. Women make up just over half of the 35 million people living with HIV worldwide but are underrepresented in clinical trials of potential HIV treatments, cures, and vaccines. A 2016 study performed by amfAR, the Foundation for AIDS Research, found that women represented a mean of only 11 percent of HIV cure trials, 19 percent of antiretroviral drug trials, and 38 percent of vaccine studies. Despite the well-known differences in how the immune systems of men and women respond to the HIV infection and how women respond to some drug treatments, clinical trials continue to rely heavily on the participation of gay men in particular. Further complicating women’s participation in clinical trials is the US Food and Drug Administration’s (FDA) strict rules for including women of childbearing age, leaving most researchers to opt for the easy way out and just enroll men, collecting data from women only after the drug is on the market. As scientists continue to pursue cures for HIV in light of reports of the second patient cured of the infection, researchers must reckon with the longstanding obstacle of the lack of women in clinical trials. The FDA has authorized the first diagnostic test to detect Zika antibodies in human blood to be marketed in the United States. The diagnostic, known as ZIKV Detect 2.0 IgM Capture ELISA, detects the proteins produced by the body’s immune system when it tests for the Zika virus in blood. Though 18 other active tests to detect Zika exist, they have only been allowed under emergency use. This newly approved diagnostic test will only be usable by those with clinical signs and symptoms of Zika or on those who have traveled to regions with active Zika transmissions. FDA Acting Commissioner Ned Sharples noted that the marketing authorization of this Zika diagnostic demonstrates “FDA’s work to protect the public health in emergency response situations.”