RV144 and the future of an HIV vaccine

Kevin Fisher is the Policy Director for GHTC member AVAC: Global Advocacy for HIV Prevention, an organization that focuses on accelerating the development and delivery of critical AIDS vaccines and HIV treatment and prevention tools. AVAC and partners are hosting a congressional briefing this week to discuss promising results from a Military HIV Research Program’s (MHRP)-sponsored trial to develop a safe and effective HIV vaccine.

Kevin Fisher is the Policy Director for GHTC member AVAC: Global Advocacy for HIV Prevention, an organization that focuses on accelerating the development and delivery of critical AIDS vaccines and HIV treatment and prevention tools. AVAC and partners are hosting a congressional briefing this week to discuss promising results from a Military HIV Research Program’s (MHRP)-sponsored trial to develop a safe and effective HIV vaccine.

Although further research is needed, a safe and effective HIV preventive vaccine has now been shown to be possible. In 2009, the Military HIV Research Program’s (MHRP)-sponsored RV144 trial became the first HIV vaccine trial ever to demonstrate effectiveness in preventing HIV infection, lowering the rate of HIV infection by 31.2 percent. MHRP, along with the study partners, announced another significant discovery in September 2011. Aiming to better understand how RV144 protects against HIV infection, the research team found two important molecular clues—two antibodies whose presence either increases or decreases the risk of HIV infection. With these findings, we are the closest we have come to discovering a scientific pathway to an HIV vaccine after three decades of research. The MHRP plans to evaluate the clues they discovered with follow-up studies. However, lack of funding for the MHRP may prohibit the researchers from advancing as planned. 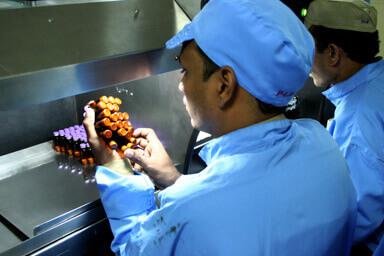 New findings show that we are the closest we have come to discovering a scientific pathway to an HIV vaccine after three decades of research. Photo: Satvir Malhotra/PATH

Since 1986, the MHRP has worked to develop a safe, globally effective HIV vaccine and began providing critical support for the President’s Emergency Plan for AIDS Relief (PEPFAR) programs in Africa in 2004. Vaccines are one of the most powerful tools for preventing infectious diseases and should be one of the highest priorities of the research and scientific community to prevent the spread of HIV. While the unique properties of the HIV virus make finding a safe and effective vaccine one of the greatest challenges in science today, the MHRP has made extraordinary strides in meeting this challenge.

Just as we are on the brink of a major breakthrough in HIV prevention the world is facing a global AIDS funding crisis. HIV treatment funding shortages and continued infection rates threaten to overtake progress made in the previous decade. The US has a critical role to play in stopping the spread of the epidemic, and through such programs as the MHRP the US can dramatically advance science and move forward the development of a safe and efficacious vaccine to control and halt the spread of HIV. As Secretary of State Hillary Clinton recently said, “An AIDS-free generation would be one of the greatest gifts the United States could give to our collective future.”

On December 9th AVAC: Global Advocacy for HIV Prevention, amfAR, the Foundation for AIDS Research and the Infectious Disease Society of America, in cooperation with Sen. Barbara Mikulski, will be holding a congressional briefing focused on the work of MHRP. Join us to discuss the recent exciting and promising results from the MHRP scientific team and critical efforts to increase the impact of the PEPFAR program by delivering lifesaving drugs and prevention tools more effectively.

Lunch will be provided

For more information or to RSVP, please contact Emily Donaldson at AVAC at edonaldson@avac.org.

Kevin is the Policy Director of AVAC and focuses on new regulatory, legislative, financial, and scientific approaches to accelerating the development of new HIV prevention options. He also co-directs the annual resource tracking reports from the HIV Vaccine and Microbicide Resource Tracking Working Group. He is co-chair of the research working group and a member of the convening group of the Federal AIDS Policy Partnership, chair of the Global AIDS Policy Partnership, and vice chair of the Drug Development Committee of the AIDS Treatment Activist Coalition.

Written by Kaitlin Christenson / GHTC
Read time:
Earlier today, the fourth annual G-FINDER report was released. This resource, developed by Policy Cures, is the only one of its kind that maps the global level of investment in developing new vaccines, drugs, diagnostics, and other tools that address 31 neglected diseases. This year’s report studies funding levels and trends in 2010. The G-FINDER report illustrates the first real evidence that the global financial crisis is impacting funders’ ability to support global health research and development (R&D). The report shows a drop of 3.5% among donors who were surveyed—including public donors in high- and low-income countries, private foundations, and the pharmaceutical industry. It is important to note that these findings merely report trends from one year to the next, and that it is essential to look at trends across multiple years to understand true patterns of change. In 2010 there were many reasons for decreased funding from some donors. For example, the Gates Foundation’s decreased funding can be largely attributed to a lower disbursement in 2010 for clinical trials of the RTS,S malaria vaccine because much of the significant funding for this research was provided up front, thus not disbursed in 2010. On the whole, funding levels in 2012 for global health R&D are higher than when the G-FINDER began tracking these numbers in 2007, which is a positive signal. That said, it is striking that in a year when the financial crisis hit its peak, public funding for global health research took an equally significant hit. The G-FINDER report also shows that globally, the public sector plays an important role in funding research and development for neglected diseases, providing nearly two-thirds of global funding. And in 2010, contributions from public funders fell by a stark 6%, or $125 million. At the GHTC, we’re paying special attention to trends related to the US government’s expenditures: The US remains the largest government funder of global health research, but even its funding for global health R&D dropped significantly: down by 5%, or $74.5 million. Drops in overall US funding are largely attributed to a decrease in funding from the National Institutes of Health (NIH) (down $44.8 million, or by 3.6%), as well as a significant decrease in funding by the Department of Defense (DoD) (down by $28.3 million, or nearly 30%). It is of interest to note that this drop in funding from the NIH came during a year when the agency received funding through the American Recovery and Reinvestment Act (ARRA). Even a modest increase in funding from the US Agency for International Development (USAID) (up $1.5 million, or roughly 1.8%) doesn’t come close to accounting for the drops by NIH and DoD. This decline in US government funding has real and significant consequences in the near- and long-term. Without sufficient funding, groups like product development partnerships, which are leading the development of global health products, are left without the immediate resources needed to complete the final phases of clinical research. And without the tools we need to combat the most severe global health challenges, people living around the world will continue to suffer and succumb to diseases that might have been otherwise prevented or treated. The scientific community is on the cusp of groundbreaking research that will yield powerful new tools to address global health, and now is not the time to turn back. An investment in science means an investment in the future, and policymakers in the US must keep their gaze forward as they make funding decisions today. Note: all funding amounts included in the G-FINDER report are adjusted for inflation and reported as 2007 dollars so that they may be compared to previous G-FINDER reports, which date back to 2007.

‘Make no mistake, we are going to win this fight’

Written by Kaitlin Christenson / GHTC
Read time:
Yesterday, at an event hosted by ONE and (RED) to commemorate World AIDS Day, President Obama declared the beginning of the end of AIDS: “Today is a remarkable day. Today, we come together, as a global community, across continents, faiths and cultures, to renew our commitment to ending the AIDS pandemic –once and for all.” I was honored to join a group of distinguished guests to witness the President’s World AIDS Day address and to hear comments from former Presidents George W. Bush and Bill Clinton; the current President of Tanzania; and a powerful panel that included a few superstars—Bono and Alicia Keys—members of Congress, business leaders, and activists. The powerful panel that included a few superstars—Bono and Alicia Keys—members of Congress, business leaders, and activists.For thirty years, the US government has led the fight against HIV and AIDS, and has played an important role in advancing science to better understand HIV and how to prevent, treat, and diagnose infection. Over the last three decades, we’ve witnessed the fruits of that leadership and the longstanding investment US policymakers have pledged to research on HIV and AIDS: from the first AIDS treatment drugs, to this year’s news that medicines to treat HIV infection could actually help prevent it, too.Yesterday’s speakers reinforced the notion that our commitment to fighting AIDS must not waiver. President Bush declared that when budget constraints exist, we need to set priorities and focus on what works. He added that there is no greater priority than living out the mandate of “to whom much is given, of him much shall be required.” His perspective was reinforced by Alicia Keys, who said, “We have the opportunity to be a global community that leaves the legacy of an AIDS-free generation. If we have the power to, then we must.”Recent research results show that we have many of the tools we need to forever change the trajectory of the epidemic. But, as Obama said, now is not the time to be complacent. We still lack a vaccine, a microbicide gel, and other tools that could help us win the war against AIDS.I’m encouraged to see the continued commitment by the Obama Administration to fighting this disease coupled with bipartisan support from congressional leaders like Congresswoman Barbara Lee and Senator Marco Rubio. My hope is that this commitment translates to continued support for research that will lead us to the next generation of tools to fight HIV and AIDS. As Sanjay Gupta, moderator of the event, said, eradicating AIDS is a goal that “allows us to stand at that most perfect union of audacity and achievability.” Will our government rise to the challenge?