The French pharmaceutical company Sanofi purchased a priority review voucher (PRV)—which entitles the owner to an expedited review of a future product by the US Food and Drug Administration (FDA)—for US$245 million last week.

The French pharmaceutical company Sanofi purchased a priority review voucher (PRV)—which entitles the owner to an expedited review of a future product by the US Food and Drug Administration (FDA)—for US$245 million last week. This particular sale was part of the Rare Pediatric Disease PRV, which was modeled after the Neglected Tropical Disease PRV—a program intended to incentivize research and development (R&D) for neglected diseases, as the market for drugs to treat these conditions is often limited. The voucher significantly expedites the FDA’s review process, from 10–12 months to 6–8 months. This voucher was awarded to Retrophin for approval of a drug to treat bile acid synthesis disorders, which are considered rare pediatric diseases. Only two vouchers have been awarded through a PRV program, the first of which was sold to Sanofi for $67 million and the second to Gilead Sciences for $125 million.

Delegates from the World Health Organization’s (WHO) 194 member states approved a resolution at the World Health Assembly—the organization’s annual convening—to address the spread of antimicrobial resistance. The resolution establishes a global strategy to control and prevent the spread of drug-resistant infections, including through the R&D of new antibiotics. Under this new resolution, member states will be required to develop and implement national plans to combat antimicrobial resistance within the next two years. WHO Director-General Dr. Margaret Chan assured delegates at the World Health Assembly that the WHO will provide technical support to national governments as needed, stating “we are going to do our utmost to support you.” The status and progress of these efforts will be reported to the World Health Assembly in May 2017. 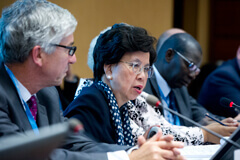 The global action plan, presented by the WHO Secretariat during the World Health Assembly, called for improved surveillance; increased awareness; and adequate, sustainable R&D funding surrounding the growing threat of antimicrobial resistance. The plan notes the “serious market failure” for antimicrobial R&D, calling for new mechanisms to incentivize and accelerate the development of new antibiotics.

Senators Patrick Leahy (D-VT) and Chuck Grassley (R-IA) recently introduced the bipartisan Patents for Humanity Program Improvement Act, which expands the Patents for Humanity program at the US Patent and Trademark Office (USTPO) to ensure small businesses can participate. Each year, USTPO identifies approximately ten products that have been patented through their office and that have since been used for humanitarian purposes, and provides the winners with a voucher for an expedited patent application, ex parte reexam, or ex parte appeal. The legislation would make the voucher transferable, which would encourage small businesses or individual researchers or inventors—who may not anticipate future patent applications or dealings with USTPO—to participate.

Written by Courtney Carson / GHTC
Read time:
Photo: PATH/Patrick McKern Update: The Global Health Technologies Coalition is excited to announce that the Global Health Innovation Act (H.R. 2241) passed the House of Representatives on December 18. Last month, Representatives Albio Sires (D-NJ) and Mario Diaz-Balart (R-FL) introduced a new piece of legislation—the Global Health Innovation Act (H.R. 2241)—that would strengthen global health research and development (R&D) programming at the US Agency for International Development (USAID). USAID plays an important role in advancing global health in low and middle-income countries and this legislation would ensure that the agency is taking appropriate steps to incorporate innovation for new global health technologies across its programming by requiring that the agency submit an annual report to Congress on the development and use of global health innovations in the agency’s programs, projects, and activities. The Global Health Innovation Act marks a key opportunity in advocacy for the need for innovation in global health. The GHTC dissects the bill below and highlights the key provisions. If passed, H.R. 2241 would: Make permanent and improve USAID’s annual report to Congress on health-related research and development activities. The act would require a comprehensive analysis of USAID’s activities to develop, advance, introduce, and scale up global health technologies. This allows policymakers and advocates to track and understand the full scope of health R&D activities taking place at USAID, identify best practices, and zero-in on gaps that may exist. Require USAID to articulate how it sets goals for health product development and measure progress toward these goals. The legislation would require USAID’s report to describe how it sets goals for health R&D in relation to its overall health objectives and mission, and how the agency measures progress towards these goals. This provides enhanced transparency into USAID’s decision-making and review processes. Require USAID to describe and demonstrate the impact of its investment in health innovations on global health outcomes. This includes analysis in the annual report of how the agency’s investments and activities in health innovation have advanced its goals to reduce the burden of HIV and AIDS, end preventable child and maternal deaths, and protect against infectious diseases. Such an impact analysis will help magnify the importance of investment in health R&D for achieving sustainable health solutions. Direct USAID to report on how it is working with partners, donors, and through public-private partnerships to leverage US investments to accelerate health innovation. This includes a description of the how the agency is working through partnerships to develop, introduce, and scale up affordable, available, and appropriate health products and close gaps in the health innovation development pipeline. This section of the report will acknowledge the diverse coalition of private sector, nonprofit, foundation, and academic institutions partnering with USAID on health innovations, and demonstrate the importance of a coordinated, cross-sector approach to health R&D. Encourage USAID to improve collaboration and coordination, both within USAID and between other US agencies, to fill critical R&D gaps. The act requires that USAID report on how it is coordinating R&D activities across its programs and how it is collaborating with other US agencies to support global health product development and ensure critical gaps are filled. This will help promote a whole-of-government approach to health R&D, which will better leverage investment, knowledge, and expertise. The legislation would make permanent and improve USAID annual report to Congress on its R&D activities. Credit: USAID The Global Health Innovation Act would not only ensure important information about USAID’s activities is made available to global health nongovernmental organizations, advocates, and policymakers in Congress, but it would also be an asset for USAID. In codifying the report on global health innovations, the bill will ensure that the agency continues to coordinate, streamline, and organize its use and development of global health technologies—a practice area that spans many departments and bureaus. It will also help the agency gauge performance, share best practices, and understand gaps in service to more efficiently and effectively serve its mission. The legislation draws upon the 21st Century Global Health Technology Act, legislation introduced in the 113th Congress, which sought to strengthen global health R&D programming at USAID by codifying programs supporting product development partnerships. The new legislation takes a more holistic approach, and directs USAID to analyze how it is using innovation to address global health challenges and the ways in which the agency can further accelerate the development and use of health technologies. It shifts away from endorsing specific programs and instead underscores the importance of USAID’s strong partnerships that leverage investments in R&D and advance global health innovation. Passing the Global Health Innovation Act will drive home the fact that health innovations are a critical piece of the global health agenda. GHTC and our members look forward to working with Congress to champion this important legislation. To read the full text of the Global Health Innovation Act, click here.
FDA/Michael J. Ermarth