Research Roundup: a promising Ebola treatment, access to drugs for NCDs, a new approach to treating a deadly bacterium, and the perception of breakthrough drugs

The US Department of Health and Human Services (HHS) is partnering with New York–based Regeneron Pharmaceuticals, Inc. for the development of an Ebola treatment.

The US Department of Health and Human Services (HHS) is partnering with New York–based Regeneron Pharmaceuticals, Inc. for the development of an Ebola treatment. The treatment, developed by Regeneron, is comprised of three monoclonal antibodies that help the human immune system identify and bind to the Ebola virus, and thus prevent the virus from entering human cells and reproducing. Through the Biomedical Advanced Research and Development Authority, HHS will contribute up to US$38 million over two years, which will support both the advanced development of the treatment, as well as manufacturing enough doses of the treatment to be used in clinical trials.

Swiss pharmaceutical company Novartis announced a new program last week to expand access to 15 of its medicines by offering them to health care providers in low- and middle-income countries for just $1 per drug per month. The program will initially be launched in Kenya, Ethiopia, and Vietnam, but could be expanded to as many as 30 countries. The 15 medicines included in the Novartis Access portfolio treat chronic diseases including cardiovascular and respiratory illnesses, diabetes, and breast cancer. Novartis will partner with governments and nongovernmental organizations to implement the program. 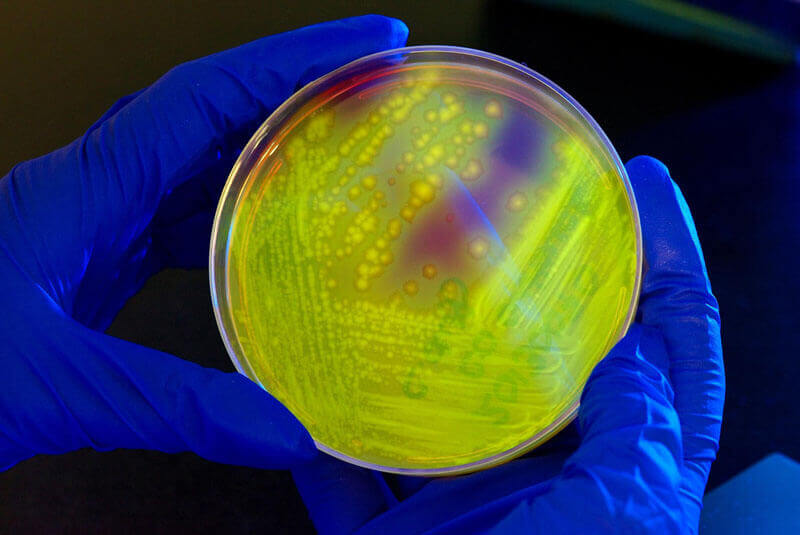 Researchers at Stanford University may have discovered a way to combat Clostridium difficile (C. diff)—a deadly bacteria that affects the intestines—without using antibiotics. C. diff’s virulence relies on a specific toxin—Toxin B—it releases that is responsible for the diarrhea, abdominal pain, and damage to the intestinal wall associated with the bacteria. While broad-spectrum antibiotics combat C. diff and other bacteria by attacking all bacteria—including safe, healthy bacteria—this new approach uses a molecule called ebselen that targets and deactivates Toxin B. The team at Stanford gave mice multiple rounds of antibiotics followed by a multidrug-resistant strand of C. diff; in other words, they made the mice particularly susceptible to infection and then introduced a particularly virulent bacteria. However, the use of ebselen to treat the infection almost completely protected the mice from symptoms. Ebselen is currently being tested for use in humans to treat other conditions, and initial results suggest that it is safe and well-tolerated.

The US Food and Drug Administration (FDA) gives breakthrough designation to drugs that treat serious conditions and that have the potential to be significantly better than anything on the market. The FDA expedites the development and review of drugs deemed to be breakthroughs, but the designation is not a guarantee of safety, efficacy, or ultimate approval of the drug. However, a new study suggests that use of the word “breakthrough” could give patients “unwarranted confidence […] which could prevent them from making a fully informed decision about whether to take the drug or not,” according to the study’s coauthor Tamar Krishnamurti. The team recruited 600 online participants, each of whom were given one of five descriptions of a drug that has received breakthrough designation. The first description included just the facts, while the second and third described the drug as “promising” and “breakthrough,” respectively. The fourth and fifth clarified that continued approval of the drug depended on the results of additional clinical trials. In the subsequent survey, participants who read that the drug was “promising” or “breakthrough” were more than twice as likely to describe the drug as very or completely effective. While nearly a third of those who read the “breakthrough” description falsely considered the drug’s efficacy to be proven, compared to only 10 to 16 percent of participants who read the clarification regarding continued approval. All participants were then asked to read two descriptions of the same drug and identify which they would take. Ninety percent of respondents chose the description that used the word “breakthrough.”

Research Roundup: genetic protection against malaria, the vaccine pipeline, and counterfeit drugs and the FDA

Written by Kat Kelley / GHTC
Read time:
Photo: CDC/ Melissa Dankel A new study conducted by the Malaria Genomic Epidemiology Network (MalariaGEN)—a community of researchers across malaria-endemic regions—reveals a formerly unknown genetic variations that make people less susceptible to malaria. The team collected over 20,000 samples from across sub-Saharan Africa, and have identified a genetic variation that provides 33 percent protection against malaria (although the rate varies across populations) as well as dozens of additional genes that appear to have some connection to natural resistance to the disease. The location of these genetic mutations in the human genome is near a region unusually similar to the chimpanzee genome, which suggests that these mutations could have developed millions of years ago. According to the study’s lead author Dominic Kwiatkowski, a process known as balancing selection might have occurred: “[the mutations] would be maintained at a sort of intermediate frequency”—common but not ubiquitous—“implying that it had both beneficial and deleterious effects.” Furthermore, this phenomenon has been observed with sickle cell trait, a gene mutation well known for providing partial protection against malaria, but that can cause a serious blood disorder when two copies of the mutation are present.   A new report from the Access to Medicine Foundation evaluates the vaccine pipelines of 20 major pharmaceutical companies, calling on these leaders in vaccine development to address the gaps in vaccine research and development (R&D) and take steps to ensure that their products will ultimately be accessible and affordable in low- and middle-income countries. The report identifies 70 vaccine candidates against 13 high-burden diseases, noting that nearly half are being developed by just three companies: GlaxoSmithKline, Novartis, and Sanofi. Of the 70 candidates, 16 target diseases for which there are currently no approved vaccines, including dengue fever, HIV and AIDS, malaria, tuberculosis, leishmaniasis, and Chagas disease. Nearly half of the candidates are for lower-respiratory infections (19 candidates), including pneumonia and influenza, or diarrheal diseases (14 candidates). There are currently access provisions—plans to ensure access to the final product—for only 12 of the candidates. Starting October 15, the US Food and Drug Administration (FDA) will have the ability to destroy   drugs sent to the US by mail if they are denied admission into the country. The FDA blocks the importation of drugs that are incorrectly labeled, not approved for use in the United States, or that appear to be counterfeit, including those that do not have the active ingredient, that have inadequate or excessive amounts of the active ingredient, or that contain the wrong, or even harmful, ingredients. Currently, the FDA returns these refused packages to the sender, and not only does this allow the sender to make another attempt, but it’s not uncommon for the same exact parcel to be sent right back to the United States “with the sticker indicating prior refusal by FDA still attached and visible.”
PATH/James Gathaney

Research Roundup: antibiotic and reproductive health R&D, leadership at the FDA, and a potential new...

Written by Kat Kelley / GHTC
Read time:
Photo: CDC/ Hsi Liu, Ph.D., MBA; James Gathany The US Department of Health and Human Services (HHS) announced last week a partnership with pharmaceutical company AstraZeneca for the research and development (R&D) of antibiotics. Through its Biomedical Advanced Research and Development Authority (BARDA), HHS will invest an initial US$50 million and up to $170 million into the project over five years. BARDA and AstraZeneca will meet annually to update their portfolio of drug candidates, determining which projects to initiate, continue, or terminate. The first project will be the advanced development and, ideally, regulatory approval of a treatment comprised of two existing antibiotics—Aztreonam and Avibactam—which is currently undergoing phase 2 clinical trials. The partners will also test new and existing antibiotics for use against diseases considered to be leading bioterrorism threats. Last Tuesday, US President Barack Obama nominated Dr. Robert Califf to lead the US Food and Drug Administration (FDA), where he has been serving as deputy commissioner for medical products and tobacco since January. Califf is a cardiologist and researcher, and previously served as the director of the Duke Translational Medicine Institute—which advances R&D by facilitating cross-sector partnerships—and as founding director of the Duke Clinical Research Institute. If confirmed by the Senate, Califf will succeed Dr. Stephen Ostroff who has served as acting commissioner since former Commissioner Dr. Margaret Hamburg announced her resignation in February. After joining the FDA in January, Califf announced that streamlining the clinical trial process would be a major focus during his tenure. A new analysis in the Guttmacher Policy Review calls for increased US investment in multipurpose prevention technologies (MPTs)—products that protect against multiple risks, including unintended pregnancy, HIV and AIDS, and other sexually transmitted infections (STIs). There is currently only one MPT in phase 3 clinical trials—a female condom that prevents pregnancy, HIV and AIDS, and four STIs—as well as nine in phase 1 trials, and thirteen in preclinical development. Among these MPTs are female condoms and vaginal rings, gels, films, nanofibers, and tablets. As MPTs are primarily intended for use in low-resource settings, private-sector interest has remained low. Additional, non-financial barriers to MPT R&D include scientific and regulatory hurdles: most MPTs have two or more active ingredients, and could thus be subject to review by as many as three divisions within the FDA. The report notes that the US government is already the biggest funder of MPT R&D, accounting for 89 percent of the $6.5 million invested in MPTs in 2013. New Delhi, India, is currently experiencing the worst outbreak of dengue fever it has seen since 2010, with nearly 1,900 confirmed cases this year. All four of the known strains of dengue virus are present in India, however, new evidence from the All India Institute of Medical Science (AIIMS) suggests that a fifth, previously undetected strain of the dengue virus, may be partially to blame for the severity of this year’s outbreak. Recovery from dengue fever provides lifetime immunity against the specific strain, however, the introduction of a new strain would leave the entire population vulnerable. AIIMS recorded the potential new strain after testing an initial fifty samples from recent dengue patients and is working with the Indian Ministry of Health and Family Welfare to collect and test more samples before coming to a conclusion.