In the past, the United States has contributed to important breakthroughs in global health—from the eradication of smallpox to a 74 percent drop in measles deaths worldwide.

In the past, the United States has contributed to important breakthroughs in global health—from the eradication of smallpox to a 74 percent drop in measles deaths worldwide. Because of longstanding US leadership and support for global health research and development (R&D), Americans and millions around the world no longer live in fear of diseases like polio and measles, and many more are on treatment for diseases like HIV and AIDS and malaria. In fact, the US government is the largest supporter of global health R&D in the world, supporting the development and delivery of vaccines, drugs, diagnostics, microbicides, and devices. However, as we sit at a very important moment in global health product development, the political and economic environment in the United States is causing some to worry. Budget constraints have put funding at risk at many of the federal agencies involvement in global health R&D. 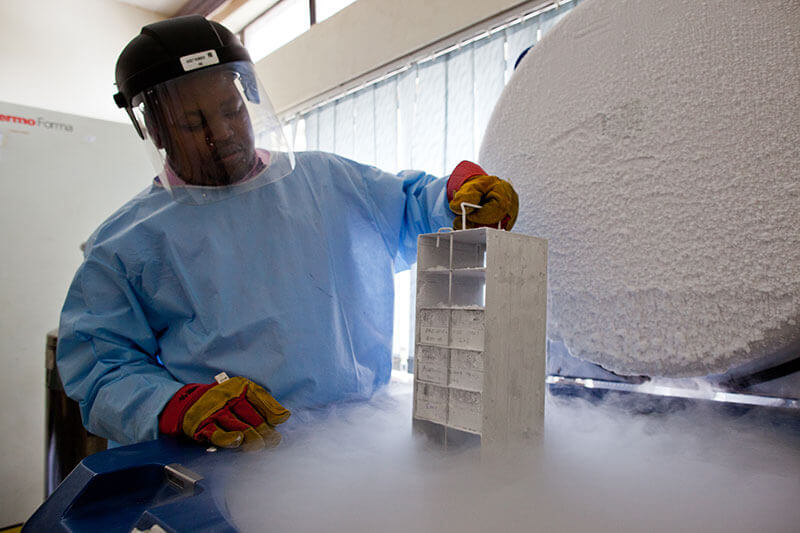 Because of longstanding US leadership and support for global health research and development (R&D), Americans and millions around the world no longer live in fear of diseases like polio and measles, and many more are on treatment for diseases like HIV and AIDS and malaria. Photo: PATH/Evelyn Hockstein

Today, the GHTC launches a new fact sheet outlining the important contributions the US government has made to global health R&D and why it’s critical the United States continues to robustly support the global health research pipeline. There are currently more global health products in the pipeline than ever before—with more than 365 new tools under development as of April 2012. Contributing to the success of many of these products is the US government’s partnerships with nonprofit product developers. These organizations partner with the public and private sectors to maximize resources and create tools for patients in low- and middle-income countries. Increased investments in global health research by the United States have the potential to increase the amount of tools combating global diseases. Just some of the products currently in the research pipeline include:

In the research pipeline for global health products, 200 of the 365 products under development have some sort of US government support. With so much investment from the United States, there is even more at risk if funding is cut. Over the past several years, the US Congress has not been able to agree on a long-term budget for the federal government. Policymakers have allowed sequestration, or widespread automatic budget cuts, to affect all federal programs. These constraints have the potential to push back or halt promising research supported by several federal agencies involved in global health R&D—including the Centers for Disease Control and Prevention, the Department of Defense (DoD), the US Food and Drug Administration, the National Institutes of Health (NIH), and the US Agency for International Development (USAID). Due to sequestration:

For many of the products currently in the global health research pipeline, continuous US support is essential. Without it, much of the breakthrough research that pushed these products to later-stage development will be lost—sometimes forever. US leaders should seize upon the recent successes in global health R&D and pass a long-term budget that ensures America’s legacy as a leader in innovation and science is not forgotten.

Written by Kim Lufkin / GHTC
Read time:
In this regular feature on Breakthroughs, we highlight some of the most interesting reads in global health research from the past week. The World Medical Association has adopted and published a revised version of the Declaration of Helsinki, which sets standards regarding medical research involving human subjects. The changes reflect a call to increase protection for people taking part in medical research. GHTC member Aeras and the Statens Serum Institut have initiated a new clinical studyfor a candidate tuberculosis (TB) vaccine. In related news, GHTC member the Global Health Innovation and Technology (GHIT) Fund announced that it will invest $720,000 for early work on a novel vaccine candidate against TB being co-developed by Japan’s Create Vaccine Co., Ltd. and Aeras. The Kaiser Family Foundation released a new public opinion survey on the US role in global health. The survey finds that Americans’ basic level of support for current levels of US spending on efforts to improve health for people in developing countries has held relatively steady in recent years. GHTC member the International AIDS Vaccine Initiative (IAVI) has released its 2012 annual progress report, which details IAVI’s progress, accomplishments, and key partnerships over the past year. The White House's Office of Management and Budget (OMB) recently confirmed that sequestration has drained about $85 million in user fees from the US Food and Drug Administration. The cuts are expected to continue, according to an OMB response to Rep. Anna Eshoo (D-CA), which she released this week. GHTC member TB Alliance has entered into a collaboration with Svizera Europe, one of the leading global supply and distribution companies for TB treatments. The partnership aims to create and enable access to new medicines for childhood TB.
PATH/Doune Porter

Written by Nick Taylor / GHTC
Read time:
In this regular feature on Breakthroughs, we highlight some of the most interesting reads in global health research from the past week. At the annual Grand Challenges meeting in Brazil this month, the Bill & Melinda Gates Foundation announced a new partnership with pharmaceutical companies to accelerate vaccine research and development (R&D). For the first project, the Gates Foundation will partner with GlaxoSmithKline on early-stage research for vaccine thermostability. According to studies published in Nature, a potential new HIV treatment has a "profound and unprecedented" impact on the virus. The trials were performed by Harvard Medical School and the National Institute of Allergy and Infectious Diseases. GHTC member Treatment Action Group released a new report on tuberculosis (TB) research funding. The report finds that after seven years of slow and unsteady increases in funding, TB R&D investors reported a drop in spending in 2012 that threatens to undermine the tenuous gains made since 2005. The Centers of Disease Control and Prevention released a report stating that the number of malaria cases in the United States is at the highest level in forty years. Nearly all the cases were Americans or foreign travelers bringing it into the country. About two-thirds were infected in Africa, where malaria is common. A new analysis published in The Lancet Global Health found that only 37—or four percent—of the 850 drugs and vaccines registered from 2000 to 2011 were for neglected diseases. The study also found that just 1 percent of existing clinical trials are for the development of tools for neglected diseases.