In January, GHTC member International Vaccine Institute (IVI) announced that a new oral cholera vaccine it developed in partnership with Korean biotech company EuBiologics, Co. Ltd.—Euvichol®—received prequalification from the World Health Organization (WHO), paving the way for the vaccine to be purchased by global procurement bodies like Gavi, the Vaccine Alliance and UNICEF. 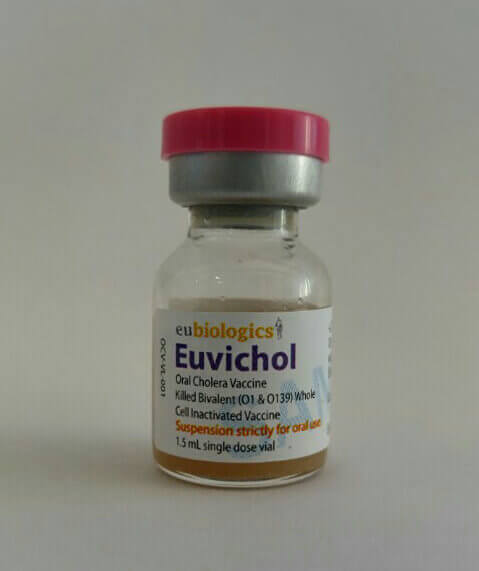 In January, GHTC member International Vaccine Institute (IVI) announced that a new oral cholera vaccine it developed in partnership with Korean biotech company EuBiologics, Co. Ltd.—Euvichol®—received prequalification from the World Health Organization (WHO), paving the way for the vaccine to be purchased by global procurement bodies like Gavi, the Vaccine Alliance and UNICEF.

GHTC’s Breakthrough blog is joined by Jerome Kim, IVI’s Director General, to learn more about this exciting development which will ease global supply limitations of the oral cholera vaccine and expand affordable access in countries where the disease is endemic.

Cholera is a potentially fatal diarrheal diseases that affects between 1.4 million and 4.3 million people each year and causes as many as 142,000 deaths annually in low-income countries. Cholera is endemic in more than 50 countries, with outbreaks often occurring during humanitarian or natural disasters. Oral vaccines against cholera have existed since the 1990s as a potential tool to stem outbreaks. However, because the disease primarily affects poor communities there wasn’t a stable market to create demand for vaccine production at an affordable cost for these countries.

To create a stable market for the vaccine, WHO created an oral cholera vaccine stockpile in 2013 to make the vaccine available at an affordable price for vaccinations in epidemic situations and endemic countries. In recent years, increasing demand for the vaccine created supply pressures on the stockpile and limited more extensive implementation of the vaccine.

The prequalification of Euvichol® by WHO means a third oral cholera vaccine producer has entered the market. This will significantly increase the number of oral cholera vaccines doses available worldwide and address global shortages. Euvichol® is also expected to help bring down costs and expand access.

The prequalification of Euvichol® is the culmination of a five-year long partnership between IVI and Eubiologics, a Korean biotech company.

IVI worked with partners in Vietnam, Sweden, India, and the United States to develop a reformulated oral cholera vaccine to meet the needs of low-income countries. IVI originally transferred the technology to an Indian biotechnology company Shantha Biotechnics. Shantha licensed the vaccine in India under the name Shanchol™ in 2009 and received WHO prequalification for the product in 2011.

To strengthen the cholera vaccine market further, in 2010, IVI transferred the technology for the vaccine to Eubiologics, as a second producer and manufacturer. Eubiologics advanced the product through clinical trials, receiving licensure from the Korean Ministry of Food and Safety in January 2015. This paved the way for the product to receive WHO prequalification in December, 2015.

The development of Euvichol® was supported by the Bill & Melinda Gates Foundation, the Republic of Korea, and Sweden. The Global Health Investment Fund (an impact investment fund sponsored by the Gates Foundation and other partners), Korea-Seoul Life Science Fund, Korea Investment Global Frontier Fund, and Green Cross Corporation also provided funding to Eubiologics.

The creation of Euvichol® is a great example of how the contributions of public, nonprofit, and commercial partners can be leveraged to advance technology development for diseases impacting the poor.

EuBiologics has initiated production of 6 million doses of the vaccine for 2016, which is expected to double WHO’s stockpile. IVI will continue to work with the WHO and partners to promote uptake of the vaccine and make sure it is available and used in places where it is needed most.

Written by Kat Kelley / GHTC
Read time:
Photo: CDC Vaccines The US National Institutes of Health (NIH) is ramping up research for a vaccine against Zika, a mosquito-borne virus which is “spreading explosively” throughout the Americas and can cause birth defects, including microcephaly, which is associated with stunted head and brain development in newborns. The NIH will be offering new funding for Zika research and supplementary funding will be available for researchers studying similar viruses, including West Nile, dengue, and yellow fever. The NIH plans to initiate clinical trials of a Zika vaccine by the end of this year, and currently has two potential candidates, one resulting from research into West Nile virus. The Brazilian government is also supporting Zika vaccine research and development (R&D), but despite its commitment to developing a vaccine “in record time,” the process will take at least three to five years. GlaxoSmithKline is conducting feasibility studies to determine if its existing vaccine technology could be used to develop a Zika vaccine, however, the company warns it could take ten to fifteen years. Inovio Pharmaceuticals and GeneOne Life Science are initiating research to develop and test a DNA-based Zika vaccine, building on their current partnership for Ebola and MERS vaccine R&D. Treatment There are currently no available therapies for Zika disease and the US Centers for Disease Control advises treating the symptoms by resting, hydrating, and taking medicines for the fever and pain. The National Institute of Allergy and Infectious Diseases (NIAID) at NIH is testing Zika drug candidates. In light of the paucity of treatment options, NIAID Director Dr. Anthony Fauci is calling for a shift in the drug development “one-bug–one-drug approach,” noting that recent pandemics have demonstrated the need for antivirals effective against entire classes of viruses. Diagnostics Point-of-care diagnostics are “the first line of defense in these outbreaks,” according to FIND Chairman Mark Kessel, as rapid, accurate diagnosis is needed to “identify, treat and track the outbreaks to minimize the deaths and costs to the world economy.” Currently, the standard approach for diagnosing Zika takes place in laboratory settings, and involves looking for the virus’ RNA in a blood sample, however the RNA only remains in the blood for a short period of time, and by the time the symptoms begin (3 to 12 days after infection), it may be too late. As exposure to Zika virus during pregnancy can lead to birth defects, scientists are also interested in diagnostic approaches that can test for past infections in newborns, however the leading method requires access to the live virus and advanced safety conditions not found in most labs. When testing for antibodies against the virus in blood samples, differentiating between related viruses can be difficult, and Zika is primarily found in areas in which the related dengue virus is endemic. Despite these limitations, several diagnostics that test for antibodies against Zika are already on the market. Most notably, the Canadian diagnostic company Biocan launched a rapid Zika test in December that takes just ten minutes, and uses a finger prick to collect blood, making it safe for use in the field. Biocan is also launching the Tell Me Fast Dengue/Chikungunya/Zika Virus Combo Rapid Test, which as the name suggests, can detect dengue, chikungunya, or Zika virus. Researchers at the University of Texas are developing a “cheap, portable box” that detects Zika virus DNA. The team has developed a prototype and is seeking additional funding for continued development and testing. The box structure enables testing of mosquitos for Zika virus, and could allow scientists to detect an outbreak early, rather than relying on reported cases in humans. Vector Control Without approved vaccines or drugs, and limited point-of-care diagnostic options for Zika virus, public health officials are calling for heightened mosquito control efforts. British biotechnology company Oxitec is testing genetically modified mosquitos to reduce the population of the Aedes aegypti mosquitos which transmits Zika, as well as dengue and chikungunya. Oxitec’s mosquitos are engineered to produce larvae that are unable to mature to adulthood, and in an ongoing trial in Piraciaba, Brazil, the introduction of the engineered mosquitos has resulted in an 82 percent decrease in A. aegypti larvae in just nine months. In response to the Zika outbreak, Oxitec is expanding its trial and building a new facility to produce the mosquitos. Oxitec is currently seeking approval from the US Food and Drug Administration to conduct additional trials in the Florida Keys. The US government is taking the spread of Zika seriously, and President Barack Obama has called for research into Zika vaccines, drugs, and diagnostics. However, the White House is also emphasizing that the threat from Zika is distinct from that of Ebola. While the risk to women who are or may become pregnant is significant, for others, “the impact of the virus is relatively mild." Are there additional Zika R&D initiatives that we’ve missed? Please send tips to Kat Kelley (kkelley@ghtcoalition.org).