“I’d be careful not to break something that would be hard to put back together,” Alan Magill—director of Malaria at the Bill and Melinda Gates Foundation—said this week at the GHTC’s annual congressional briefing.

“I’d be careful not to break something that would be hard to put back together,” Alan Magill—director of Malaria at the Bill & Melinda Gates Foundation—said this week at the GHTC’s annual congressional briefing. Sequestration, just days away, was a primary concern for Magill and others at the event, which focused on how US policymakers can protect the nation’s investments in global health research in upcoming budget discussions.

As Magill and others stressed, sequestration and federal budget cuts would severely hamper research taking place across the US government to develop new vaccines, drugs, and other tools for global public health. According to moderator Lisa Cohen, executive director of the Washington Global Health Alliance, more than 350 health innovations are in the research pipeline. She added that 200 of these are supported by the US government through agencies such as the Centers for Disease Control and Prevention (CDC), the Department of Defense (DoD), the US Food and Drug Administration (FDA), the National Institutes of Health (NIH), and the US Agency for International Development (USAID).

(from right to left) Lee Hall from the National Institute of Allergy and Infectious Diseases, Caroline Ryan from the President's Emergency Plan for AIDS Relief, and Alan Magill from the Bill & Melinda Gates Foundation. Photo credit: PATH.

Widespread budget cuts would stop scientific progress in its tracks—progress that cannot be seamlessly picked up again if funding were to resume in the future. “Many biomedical studies cannot survive cuts in funding in the middle of their work. It would be an irreversible mistake to halt these ongoing global health research efforts,” Cohen said, adding, “Halting funding would mean that the world may never benefit from these tools that are so close to development and delivery.”

As the panelists stressed, there are several compelling humanitarian reasons to protect US investments in global health research. “Scientific advancements have brought us to a tipping point in the fight against HIV and AIDS,” Caroline Ryan, deputy coordinator for Technical Leadership at the President’s Emergency Plan for AIDS Relief (PEPFAR) said. She added that “science has set us on a new path—a path to achieving an HIV-free generation.”

Lee Hall, chief of the Parasitology and International Programs Branch at the National Institute of Allergy and Infectious Diseases, said that the NIH is supporting research for an array of new, lifesaving health tools—including drugs, diagnostics, and vaccines for malaria, Chagas disease, and tuberculosis. “We’re standing at a very promising moment,” Hall said. “Looking at what’s on the horizon, it’s clear that a lot will come out of our support for global health research. We need new tools if we are to realize the benefits of US support for global health.”

Speakers also emphasized that there are countless domestic benefits that come with US investments in global health research. “We live in a globalized world, whether we like it or not,” Magill said. “This presents us with the choice to exert America’s leadership role and shape the world how we’d like to see it—or let someone else do it for us.” Magill added that with the ease and speed of airline travel, “what’s happening in the middle of Africa today could be happening at Dulles tomorrow.” Hall also highlighted that many areas in the United States are vulnerable to tropical infections, and that diseases like Chagas are appearing throughout some Southwestern states. 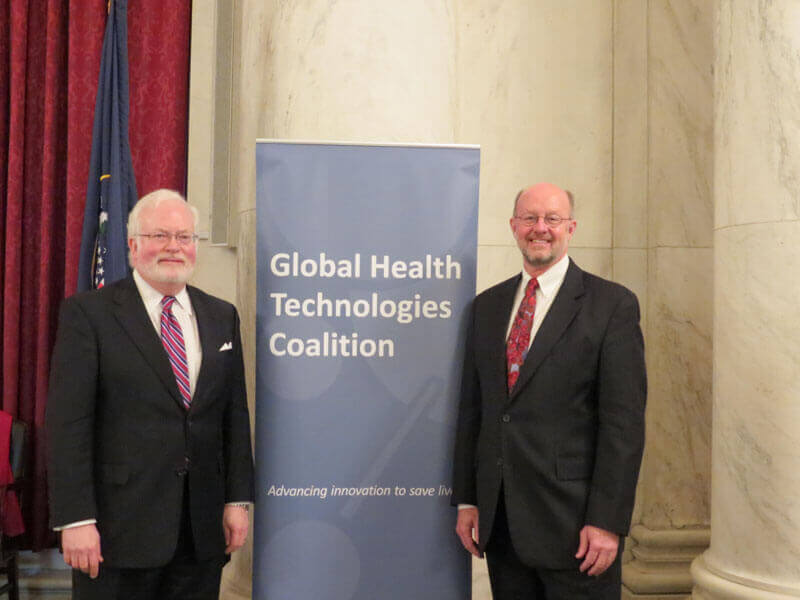 Throughout the event, all three panelists underscored the importance of partnerships to advancing research and science for new health tools. According to Ryan, PEPFAR “gets more bang for our buck” by working in partnerships with other US agencies, such as the NIH and FDA, as well as philanthropic groups like the Gates Foundation. As an example, Ryan cited that PEPFAR and USAID are supporting the development of microbicides with a research infrastructure established by the NIH.

Hall also cited NIH’s numerous partnerships with US academic institutions, nonprofit groups, and other federal agencies like the CDC and DoD. Magill stressed that from the Gates Foundation’s perspective, the US government is a critical partner in global health. “The Bill & Melinda Gates Foundation can only provide a small fraction of what the US can bring to the table,” he said, adding that investments in global health research should not only be seen as humanitarian aid—they are investments in science that provide “a lot bang for a little buck. We should save programs that are investments in the future.”

Written by Kim Lufkin / GHTC
Read time:
Although we’re several days into sequestration, details about the full impact of funding cuts are still hazy. On Friday, the Office of Management and Budget (OMB) released a report to Congress, which details funding cuts required to offset $85 billion in the fiscal year (FY) 2013 budget. In order to reach this goal, the OMB report indicates that global health research and development (R&D) programs will be subjected to cuts of either 5 percent or 7.8 percent. But because the cuts must take place over a seven month period (instead of a full year) to fit within the fiscal year, OMB calculates that these cuts could actually be at a rate of 9 percent and 13 percent with the remaining funding for this year. OMB’s report provides some specific details on how the cuts are calculated. It also provides illustrative examples of what the sequestration cuts might look like if applied equally within federal agency budgets. However, because agency heads will have discretion over how specific cuts affect their agencies, the exact implications of sequestration will be determined in the coming weeks. Estimates are emerging regarding the widespread impact of sequestration on the agencies that support global health R&D. Photo credit: PATH While waiting for these details to come out, we are starting to see some estimates emerge regarding the impact of sequestration on the agencies that support global health R&D. For example: The National Institutes of Health’s discretionary budget will be reduced from $30,899,000 to $29,321,000 for FY13, a cut of over $1.5 billion. The sequester would equate to a $2.6 billion reduction to the State Department and US Agency for International Development (USAID) FY13 budget, translating to a $1.7 billion cut to foreign assistance programs. In particular, sequestration will cut over $400 million from global health initiatives at the State Department and USAID, including R&D initiatives. Global health programs at the Centers for Disease Control and Prevention are likely to be reduced by taking 5 percent from HIV and AIDS initiatives and then taking 5 percent from the remainder of the account. Discretionary spending for the Department of Defense (DoD) is subject to a 7.8 percent reduction, which would include any global health R&D initiatives embedded in DoD programs. Some reports indicate that the US Food and Drug Administration will lose about 9 percent of its budget for FY13. The Obama Administration is urging Congress to allow the agency to spend $41 billion-worth of user fees. In the meantime, the government is currently running on a Continuing Resolution, which expires on March 27. Congressional leaders and President Obama have expressed hopes about successfully negotiating a new spending bill by March 27, in order to avoid a government shut-down. These negotiations may also provide an opportunity to reverse the sequester, before the full impact of the cuts are felt across the government. The President’s budget request for FY14 is also on the horizon, with reports indicating that it might be released on March 25. The House and Senate will begin to take up FY14 budget resolutions, which each Chamber must pass by April 15. It’s becoming increasingly clear that sequestration is the wrong way to reduce the nation’s debt, especially when the impact would set back innovation and devastate global public health. Policymakers should use the upcoming budget negotiations as an opportunity to reverse sequestration and develop a long-term budget solution that protects and—where possible—increases funding for global health product development. Slashing funding will interrupt scientific progress and leave us without the urgent tools we need to address health needs now and in the future.
Architect of the Capitol

GHTC 2013 report: Clear steps for policymakers to renew the US legacy in global health...

Written by Kim Lufkin / GHTC
Read time:
We have long known that Washington is operating under a remarkably unorthodox budgetary process. Sequestration threatens to reduce funding for most federal programs by at least five percent. More than halfway through the current fiscal year, policymakers still haven’t completed work on the 2013 budget. They will likely be finishing budget negotiations for this year as they start the process all over again for 2014. These tense and uncertain budgetary circumstances in Washington are placing enormous constraints on research and development (R&D) efforts to develop new and improved vaccines, drugs, and other tools for global public health. In the midst of these critical federal budget decisions, the Global Health Technologies Coalition (GHTC) is releasing our fourth annual policy report. We believe that sequestration and the federal budget present the United States with the opportunity to take two decidedly different paths. Policymakers can renew the nation’s longstanding role as a leader in supporting global health R&D by preventing sequestration and protecting research funding in the federal budget. Alternatively, policymakers can place this leadership role at risk by allowing sequestration to take place and reducing investments in global health R&D in the federal budget. The fourth annual GHTC policy report provides actionable steps that US policymakers can take to protect global health R&D in the upcoming budget negotiations. Congress and the Obama administration are not in an enviable position—they are facing incredibly challenging decisions regarding the budget. They must set priorities for the country and provide funding for them. In these times of fiscal constraint, policymakers need to be even more discerning and invest in essential activities that not only save lives and improve health worldwide, but also provide jobs and reap other rewards at home. Our policy report proves that global health R&D unquestionably meets all of these goals. Previous US investments in research to develop new vaccines, drugs, diagnostics, microbicides, devices, insecticides, and other tools have led to some of the greatest advances in global health to date, saving countless lives and resulting in billions of dollars in cost savings. With increased investment and support from the US government, further gains are within reach for HIV and AIDS, malaria, tuberculosis, neglected tropical diseases, maternal and reproductive health, and childhood survival. Global health research also drives US job creation and economic growth, while protecting the health of American citizens who are increasingly at risk of global infectious diseases. For instance, there are an estimated five million impoverished Americans who live with neglected tropical diseases, including a previously hidden burden of neglected diseases among the poor in the southern United States. Supporting research to develop new vaccines and drugs will help fight these diseases both at home and abroad. Our report provides actionable steps that Congress and the administration can take to protect global health R&D in the upcoming budget negotiations. The report also provides clear recommendationsfor how the US government can increasingly coordinate its global health research activities—which stretch across multiple agencies, branches, and departments—around a cohesive strategy. In the coming months, policymakers have the opportunity to set a course for renewal by ensuring that the nation’s fiscal policies and international development programs support research and innovation for global health. The reasons are clear, and there is too much to lose by pulling back now. The GHTC’s fourth annual policy report can be found online. The report will be released today at a Capitol Hill briefing.