Maryland is home to two federal health powerhouses, the Food and Drug Administration and the National Institutes of Health (NIH), the world’s largest medical research institute. Together, they employ 25,000 people.

Research!America, a member of the GHTC, recently conducted analyses in target states to measure the health and economic impact of global health research and development (R&D), highlighting its benefits for states across the nation and strengthening the evidence base for Congress’ support of federal investments in global health R&D. Danielle Doughman, program manager for global health R&D advocacy, shares the organization’s findings in Maryland. This is the third post in a series.

If it’s true that health is wealth, Maryland has both in abundance.

Maryland is home to two federal health powerhouses, the Food and Drug Administration and the National Institutes of Health (NIH), the world’s largest medical research institute. Together, they employ 25,000 people. Silver Spring’s Walter Reed Army Institute of Research is engaged in global health research to protect our military personnel from infectious threats they may encounter in the field. And Marylanders see the direct benefits of that research: 82 percent recognize that American civilians benefit from the health research conducted by the military, according to a poll commissioned by Research!America. 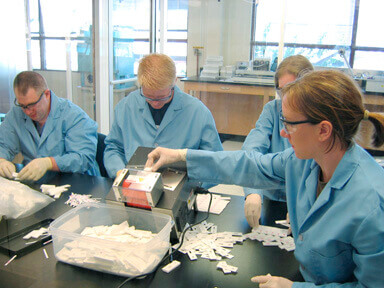 What’s more, Maryland’s life sciences sector supported 71,600 jobs in 2010. Workers in the life sciences industry earned, on average, more than $91,000 annually—76 percent more than the state average. Of the nearly $52.7 million in extramural funding that flowed to Maryland from NIH in fiscal year 2012, over 70 percent, or $37.8 million, was awarded through contracts and grants to Johns Hopkins University. Hopkins is among Maryland’s largest employers, with 47,000 employees across the university and affiliated health system, and it contributes more than $10 billion per year to the state’s economy.

Nonprofit global health “product development partnerships” use a unique business model to work across sectors to accelerate the creation of low-cost drugs, vaccines, and diagnostics to advance health for the most vulnerable populations. Two such nonprofits are headquartered in Maryland.

Rockville’s Aeras, another GHTC member, engages in the development of new tuberculosis (TB) vaccines and other prevention technologies, capitalizing on the expertise of its partners to accelerate the development of the six vaccines in its R&D pipeline. Aeras’ 135 Maryland-based employees understand that the sooner effective products are available, the closer we are to dramatically reducing the 1.4 million lives lost to TB every year.

Just last week, Aeras announced its partnership with NIH’s National Institute of Allergy and Infectious Diseases for a Phase II clinical trial of a TB vaccine. With the first cases of totally drug-resistant TB coming to international attention earlier this year, aggressive pursuit of vastly improved TB drugs, vaccines, and diagnostics has never been more crucial than it is now.

With support from the US Agency for International Development and NIH, Maryland’s International Partnership for Microbicides (IPM) is helping to lead the charge to design products to protect women from HIV and AIDS, the leading cause of death for women ages 15-44 worldwide. In addition to the support of the US government, IPM works with partners around the world to develop antiretroviral-based microbicides to safely and effectively protect women against HIV. Later this year, IPM and the NIH-funded Microbicide Trials Network will move a promising product into late-stage clinical trials.

The robust federal investment and presence in Maryland reflects the fact that more than three-quarters of Marylanders say Americans should be concerned about global diseases like malaria, cholera, and other infectious diseases that mostly affect poorer countries. More than ever before, America’s health—in both economic and medical terms—is global health.

Danielle Doughman is Program Manager of Global Health R&D Advocacy at Research!America, a nonprofit that advocates for science, discovery, and innovation to achieve better health for all.

Written by David Kappos / US Patent and Trademark Office
Read time:
David Kappos is the Director of the US Patent and Trademark Office (USPTO). On Wednesday, USPTO announced the Patents for Humanity pilot program, which rewards patent owners for using their patented technology to address humanitarian needs, including global health and medical technologies. The program was announced at a White House event on innovation for international development. This post originally appeared on the USPTO blog. Sweeping revolutions in technology continue to fundamentally redefine the way we connect with one another and interact with the world. Today, an entrepreneur can do business with a remote village across an ocean just as quickly as a student in Boston can video-conference with a professor in Beijing. Political rallies can be organized by the click of a button, while gripping images of that rally can be shared across continents with a single tweet. And while an ever-shrinking and increasingly interconnected world allows technologies and information to spread in unprecedented ways, it also reminds us of the unique challenges we face as a planet. That’s why the United States Patent and Trademark Office, during a global development event today at the White House, announced the Patents for Humanity pilot program. Because while 21st century challenges are global in scope, so too are their solutions. By building smarter irrigation systems in towns plagued by drought, by delivering cost-effective medicinal vaccines to communities without hospitals, and by engineering weather-resistant crop strains to farms ravaged by natural disasters, patented inventions have the power to create lasting solutions for some of the most serious issues confronting the world’s poorest and underserved regions. By offering strong incentives for businesses of all sizes to engage in these humanitarian efforts, Patents for Humanity encourages up to 1,000 applicants to demonstrate how their patented, or patent-pending technologies, are advancing research and results in four categories: Medical Technology, Food and Nutrition, Clean Technology, and Information Technology. USPTO is launching Patents for Humanity, a program to advance research and results that will address global challenges Photo: Evelyn Hockstein/PATH Judges selected from academia for their expertise in these fields will review applications and recommend winners, and up to 50 awardees will receive certificates for accelerated patent processing at the USPTO—a powerful tool for helping businesses validate their technology and resolve investment decisions more quickly. Not only will the faster processing help technologists move solutions to the marketplace faster; it will also demonstrate that humanitarian endeavors and smart economic growth can work hand in hand. By harnessing the power of science and technology with research and development, Patents for Humanity plays a key role in advancing President Obama’s global development agenda. By collaborating with parts of the world in ways unimaginable just a few years ago, and by unleashing broader prosperity in emerging economies, this important new USPTO initiative demonstrates that the power to innovate is the power to lead, by design and by solution.

Innovation: The key to fighting HIV and AIDS

Written by Nick Taylor / GHTC
Read time:
Nick Taylor is the program assistant at the GHTC. On Wednesday, he attended a briefing on Capitol Hill hosted by the Office of the Global AIDS Coordinator. Wednesday’s briefing—co-hosted by the Foundation for AIDS Research (amfAR), the President’s Emergency Plan for AIDS Relief (PEPFAR), and the Center for Global Health Policy at the Infectious Diseases Society of America —convened several HIV physicians and scientists to discuss PEPFAR and the evidence-based HIV prevention methods that the program implements in countries with high rates of HIV and AIDS. This briefing was the first in a series that will be held leading up to the International AIDS Conference this summer in Washington, DC. For thirty years, HIV and AIDS have proven to be among the most difficult public health threats the world has ever seen. While there have been many successes in combating HIV in recent years, most recognize that there is still a lot more to be done in order to achieve the goal of an AIDS-free generation. On Wednesday, members of the HIV and AIDS community gathered in the Kennedy Caucus Room in Washington, DC, for a briefing on PEPFAR and combination prevention treatments. Panelists stressed the importance of research and development (R&D) in the fight against AIDS and noted the successes of PEPFAR in expanding access to HIV and AIDS prevention. Last year, the world watched as President Obama said that “we can end this pandemic” and Secretary of State Hillary Clinton declared that we can get the number of mother-to-child transmissions of HIV to near zero by 2015. These powerful statements—along with the International AIDS Conference occurring in Washington, DC, this year—have put a renewed focus on innovation and research for preventing and treating HIV. Dr. Diane Havlir—a professor of medicine at the University of California, San Francisco, and panelist at Wednesday’s briefing—stated that investing in research allowed scientists to determine how to treat HIV with antiretroviral treatment (ART), which has saved millions of lives. In fact, according to Dr. Havlir, because ART has helped to keep people healthier, many societies have saved significant funds that would otherwise have been spent on medical care. This is surely a sound economic incentive to invest in research more often. Research and innovation need to play a key role in the global effort to achieve an AIDS-free generation. Photo: Evelyn Hockstein/PATH.. The briefing highlighted some of the most recent innovations that have been developed to prevent HIV. There is no question that ART has been successful in treating people infected with HIV, but studies have also shown that we can use treatment as prevention for HIV as well. If patients are put on ART at an earlier time than is normally recommended, the transmission rate from one HIV-positive person to a HIV-negative person can be reduced by more than 90 percent. Medical male circumcision has also proven to be an extremely effective way of preventing the spread of HIV. PEPFAR alone has provided funding for over four million male circumcisions since its inception, and panelists reported that the cost savings of those and the millions of circumcisions funded by nongovernmental organizations and other government programs has been nearly $16 billion. There are new tools in the pipeline that are making male circumcision faster, cheaper, and most importantly, safer. These devices require no anesthetic, no sutures, and do not need to occur in a sterile setting—which is often too hard to find for many men. This July, when the International AIDS Conference convenes, all eyes will be on Washington. Much will be said about the pandemic, and grand declarations will surely be made. What we’re all hoping to hear is that research and innovation will play a key role in fighting, and eventually ending, the HIV and AIDS pandemic.