Follow Breakthroughs for the latest R&D news from AIDS 2012

The biennial gathering of the world’s top HIV and AIDS scientists, advocates, and policymakers comes on the heels of some of the most significant research results for new HIV prevention and treatment tools in recent years, and the Breakthroughs blog will be at the conference from July 22 to 27, reporting on these research and development (R&D) advances.

It’s exciting to see that research is a central theme of this year’s AIDS 2012 conference in Washington, DC. The biennial gathering of the world’s top HIV and AIDS scientists, advocates, and policymakers comes on the heels of some of the most significant research results for new HIV prevention and treatment tools in recent years, and the Breakthroughs blog will be at the conference from July 22 to 27, reporting on these research and development (R&D) advances.

In a press release made public this week from the AIDS 2012 organizers, R&D efforts stand out as a critical component of efforts to turn the tide against the pandemic. The release recognizes that in the last few years, several trials—including HPTN 052, TDF2, Partners PrEP, and iPrEx—have demonstrated with “solid evidence the efficacy of HIV treatment as prevention, while other studies are currently investigating the possibility of a cure for HIV.” The official conference program, now available online, indicates that even more R&D advances in HIV and AIDS treatment and prevention could be announced at the conference.

“Thanks to these scientific advances, for the first time we have a real opportunity to make a major dent in the epidemic,” said Elly Katabira, AIDS 2012 international chair and president of the International AIDS Society. The conference has also secured an impressive list of keynote speakers, including former US President Bill Clinton, US Health and Human Services Secretary Kathleen Sebelius, Sir Elton John, South African Health Minister Aaron Motsoaledi, and philanthropist Bill Gates. 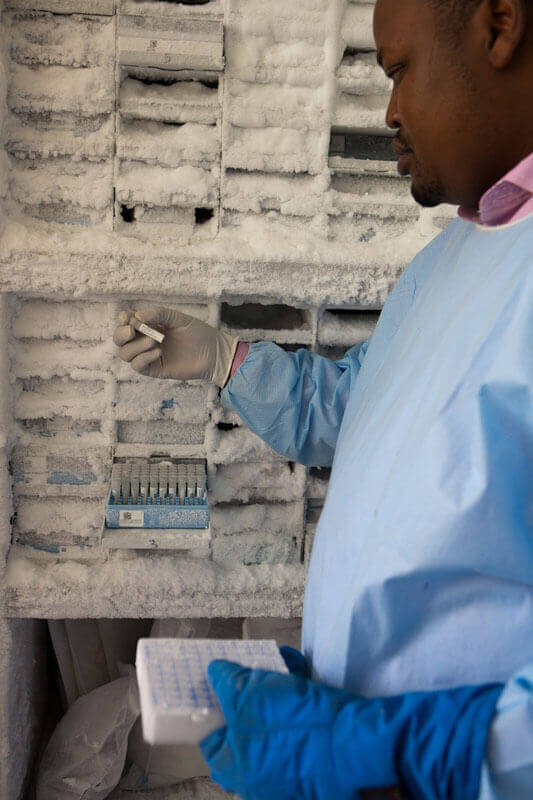 Thanks to scientific advances, for the first time the world has a real opportunity to make a major dent in the HIV and AIDS pandemic. Photo credit: PATH/Evelyn Hockstein.

Make sure to follow us on Breakthroughs for the latest R&D announcements from the conference, as well as significant policy news and implications for HIV prevention and treatment tools. We’ll also bring you the latest updates from GHTC members supporting these new HIV and AIDS technologies, including AVAC, the International AIDS Vaccine Initiative, the International Partnership for Microbicides, and the Population Council.

“AIDS 2012 represents a unique occasion to mobilize policymakers, governments, NGOs, scientists, people living with HIV, and civil society to join forces,” said Diane Havlir, AIDS 2012 co-chair and professor of medicine at the University of California. “Despite the global turbulent economic climate we cannot miss this historic moment, and it is vital to continue to attract funding to invest in AIDS research and promote programs based on effectiveness and efficiency in order to optimize the use of resources.” We at the GHTC couldn’t agree more, and look forward to sharing what promises to be monumental R&D and policy news from AIDS 2012.

Written by Ashley Bennett / GHTC
Read time:
Combating preventable child deaths worldwide is an “investment that will pay dividends for years to come,” Deputy National Security Advisor Dennis McDonough said last week at a major conference at Georgetown University. At the conference, representatives from over 80 countries met to pledge their support for an exciting new global campaign for child survival. Hosted by the United States, UNICEF, and the governments of Ethiopia and India, the summit convened high-ranking government officials, members of the faith community, advocates, and private sector representatives. Over the last 50 years, child mortality rates have dropped by 70 percent. However, 7.6 million children under age five still die each year—far too many. In 2010, 57 out of every 1,000 children died before age five. The goal of the new program is to reduce that global rate to 15 deaths per 1,000 children by 2035. Under the program, UNICEF will house a small secretariat that will coordinate global activities to increase access to existing technologies and improve treatment guidelines, while partner countries like the United States will implement five strategic shifts to accelerate progress. As US agencies work with their partners to implement a new child health program, they must invest in R&D for new global health technologies. It’s critical that the program include a dedicated and distinct focus on global investments in research and development (R&D) for new tools to combat global child deaths, we still lack the vaccines, drugs, and other technologies needed to save children’s lives around the world. Indeed, research and innovation for new tools have been a huge factor in the success made against child mortality in the past 20 years, and must be prioritized by the new program. Several speakers at the summit praised the impact that technologies like the polio vaccine, oral rehydration solution to treat diarrhea, the MenAfriVac™ meningitis vaccine, and others have made in saving the lives of millions of children. Imagine if we had never invented a polio vaccine, or malaria drugs for children, or diagnostic tools for tuberculosis—what would global child mortality rates be today? A historic commitment to child health R&D helped create the tools that have already made a huge dent in global childhood deaths. For this reason, we should not only increase access to these existing technologies—the US Government and global partners must also continue to support R&D for the next generation of health products for children. If they don’t, the world will never reach the goals set by the new program. Fortunately, several US officials stressed the role of R&D in this effort last week. Secretary of State Hillary Clinton emphasized the commitment of the US Government to the development of new tools, saying, “We will support innovative research into new life-saving cost-effective measures.” Health and Human Services Secretary Kathleen Sebelius echoed the US role in basic research to support global health programs. Additionally, health officials from countries such as Bangladesh, Pakistan, and Nigeria highlighted the immense impact of global health technologies on their national child health programs. These achievements can be furthered by R&D-focused programs supported by the US Government, such as the second round of the Saving Lives at Birth program at the US Agency for International Development (USAID) and a joint USAID/National Institutes of Health initiative (NIH) that will provide grants to researchers in developing countries. As USAID and other agencies work with their partners to implement this important new program, they must invest in R&D for new global health technologies and plan for their delivery. USAID, NIH, and several other US agencies have a history of investment in innovation and are experts in catalyzing new research for huge impact. If we truly want to make the amazing progress we are promising to the next generation, the US must continue to expand its investment in global health R&D.
PATH/Nguyen Ba Quang

Written by Kim Lufkin / GHTC
Read time:
In this regular feature on Breakthroughs, we highlight some of the most interesting reads in global health research from the past week. Secretary of State Hillary Clinton and US Agency for International Development Administrator Rajiv Shah were joined by more than 700 leaders from the private sector, government, and civil society for a major conference devoted to preventing childhood deaths worldwide. "Amid these financial threats and budgetary realities, it is inevitable that some will question the role of the United States in global development," Sen. Richard Lugar (R-IN) said at the conference. "But I would assert this morning that development assistance, when properly administered, remains a bargain for US national security and for our own economic and moral standing in the world." Five new pharmaceutical companies have joined a National Institutes of Health (NIH) program that will pair researchers with certain pharmaceutical industry compounds to help scientists explore new treatment options for patients. The program, called Discovering New Therapeutic Uses for Existing Molecules, is run by the NIH's National Center for Advancing Translational Sciences (NCATS). The US Food and Drug Administration (FDA) has decided to delay its final decision on whether the drug Truvada, made by Gilead Sciences, can be used by certain high-risk, HIV-negative people as a preventive measure against HIV. The FDA says its decision will be announced by September 14, 2012. A Baltimore Sun letter-to-the-editor argues that there are more people living with tuberculosis (TB) “now than at any time in history.” The letter adds that prevention with “new vaccines is the only way to truly make TB a thing of history.”