Curtains down for the NEPRC

As animal facilities go, the New England Primate Research Center (NEPRC) had attained a legendary status on the roster of US biomedical research institutions.

In this guest post, Regina McEnery from IAVI Report writes about the planned closure of the New England Primate Research Center and its effects on the community of HIV researchers who conduct primate studies.

As animal facilities go, the New England Primate Research Center (NEPRC) had attained a legendary status on the roster of US biomedical research institutions. A good number of important discoveries have been made within its walls in the half century it has been around. Researchers working there generated some of the earliest evidence that AIDS is a viral disease, and subsequently discovered the simian immunodeficiency virus (SIV), which causes the monkey version of AIDS. It was there, as well, that scientists demonstrated that a vaccine can prevent the transmission of SIV, suggesting that an HIV vaccine is possible. Nor were the NEPRC’s contributions to science confined to HIV and AIDS. The facility has hosted research of profound relevance to everything from cancer to neurological disease and addiction.

But lately it had become increasingly clear that this storied institution’s best days were behind it—so far behind it, in fact, that the Harvard Medical School (HMS), which oversees the center, decided it should be shut down. Its decline was slow and fueled largely by management and money problems, rather than the quality of its research. The NEPRC has, for example, been cited at least four times since 2010 by the US Department of Agriculture (USDA) for failure to comply with the requirements of the Animal Control Act. The most recent citation, issued last year, related to a cotton-top tamarin found dehydrated after an employee neglected to provide sufficient water to the squirrel-sized monkey. After examining its recent health history, the NEPRC veterinarian decided to euthanize the monkey, according to the USDA report. 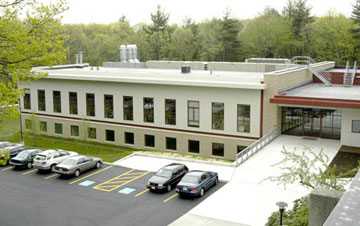 The New England Primate Research Center, which had attained a legendary status on the roster of US biomedical research institutions, will be closing. Photo courtesy of IAVI Report.

John Harding, acting director of the Division of Comparative Medicine within the Office of Research Infrastructure Programs (ORIP)—the National Institutes of Health arm that provides the core grants for all national primate research centers—notes that it is “ very uncommon to find violations of the sort where animals died.”

Still, HMS’s decision to wind down the facility by 2015 has upset the close-knit community of primate researchers. “We were all shocked,” says Ron Veazey, a professor of pathology at the Tulane National Primate Research Center in Louisiana. “Very few people can say, ‘we saw this coming.’ In an ideal world, all those [NEPRC] investigators will be able to transfer projects to other primate centers and everything will go on. But we can’t be sure.”

The NEPRC decision to phase out its research also raises serious questions about the future of the approximately 130 projects it hosts—many of which relate to AIDS. Ditto for the 2,000 or so primates housed at the facility in Southborough, MA. The closure is likely to be widely felt throughout the field of HIV research, especially in the areas of vaccine and drug development. “Literally every class of HIV drug, with the exception of protease inhibitors, was first tested in monkeys,” noted Veazey.

Louis Picker, a professor of pathology/molecular microbiology and immunology affiliated with the Oregon National Primate Research Center, says he was upset by the decision to shut down the NEPRC—where he did research during his laboratory and pathology medicine residency at Beth Israel Deaconess Medical Center in Boston. But he wasn’t surprised. “You could see the writing on the wall when this first started, two to three years ago, with the mishandling of the animal issues.”

Picker says that Harvard’s response to the animal care issues—replacing NEPRC director Ron Desrosiers and two on-site veterinarians—served to drive investigators away rather than fix the problem. HMS, however, did not single out the animal care issues in explaining its decision. In evaluating its long-term needs, HMS says, it concluded that closing NEPRC would be more beneficial and efficient than pouring more resources into maintaining and renewing its supporting grant.

Still, even researchers personally unaffected by the closure of the NEPRC find its disappearance from the HIV research map hard to take in. “Personally, I see it as a loss for Harvard and for the New England research committee,” said Ana Aldovini, a scientist at Boston Children’s Hospital who once used the NEPRC, but now collaborates with Tulane. “I can’t imagine it not being a loss.”

A longer version of this article is available at www.iavireport.org.

Regina McEnery is a science writer at the International AIDS Vaccine Initiative, a nonprofit working to develop preventative AIDS vaccines that are safe, effective, and accessible to all people.

Written by Claire Wingfield / PATH
Read time:
In this guest post, Claire Wingfield—product development policy officer at PATH—writes about a new paper she developed for the GHTC that outlines key challenges and solutions facing research and development (R&D) for diseases of poverty. In April 2012, a World Health Organization (WHO) working group released a report outlining recommendations to improve the coordination and financing of R&D targeting the health needs of low- and middle-income countries (LMICs). The recommendations were hotly debated at last year’s World Health Assembly, but did not have enough support among WHO Member States to pass. A new resolution will be considered at this year’s World Health Assembly, being held this week in Geneva. In an effort to inform this and other global debates, the GHTC has released a paper providing new insights from nonprofit product development organizations (NPPDs) working to advance R&D for poverty-related and neglected diseases and conditions. NPPDs are nongovernmental organizations that partner with the public, philanthropic, and private sectors to develop technologies—including diagnostics, drugs, devices, vaccines, and microbicides. NPPDs were established to accelerate R&D and improve access to products that would not be available otherwise for commercial reasons. This paper provides examples of how NPPDs approach product development for diseases and conditions prevalent in LMICs, as well as outlines the key challenges they face. We surveyed a cross-sampling of NPPDs to capture their perspectives on the gaps in the current global pipeline, key challenges as technologies advance through the pipeline, and potential solutions to solving those challenges. The GHTC's new paper finds that NPPDs play a vital role in bringing together the fragmented resources and expertise of the various sectors involved in neglected disease R&D. Credit: PATH/Evelyn Hockstein We found that NPPDs play a vital role in bringing together the fragmented resources and expertise of the various sectors involved in neglected disease R&D—not only by developing and delivering health products that would not be available otherwise, but also by improving scientific understanding for many of these conditions. For example, the surveyed NPPDs reported contributing to the development of more than 450 technologies across neglected and infectious diseases, as well as maternal, newborn, and child health, and sexual and reproductive health conditions. Despite this progress, NPPDs cited several significant challenges that hinder their work. Not surprisingly, funding was the most commonly cited challenge. NPPDs noted that there are too few funders investing too few resources in R&D for neglected diseases and poverty-related conditions. As a result of a relatively small number of funders, shifts by donors can have significant effects. For example, a cut of just 10 percent by the National Institute of Health—the largest funder of R&D for LMICs—would have a disproportionately large impact on the overall funding picture. Another main challenge is a lack of consistent regulatory requirements and limited capacities of national regulatory authorities, which NPPDs cited as major contributors to delays and increased costs. NPPDs noted that each delay increases the complexity, duration, and cost of conducting research targeting the health needs of LMICs. For instance, PATH Malaria Vaccine Initiative had to clear 40 independent review boards—many reviewing the same information against different standards—in order to initiate clinical trials of one of its malaria vaccine candidates. NPPDs noted that limited local research and manufacturing capacity constrain their and their partners’ ability to keep the pipeline filled and bring new and improved technologies to patients. Many local research sites have not conducted studies that meet international standards. Manufacturing partners in many of these countries lack the experience producing products that meet standards necessary to secure approval from WHO and international procurement agencies, such as the GAVI Alliance and United Nations Children’s Fund . This means NPPDs and their partners must invest in strengthening local research and manufacturing. As just one example, the International Partnership for Microbicides established its South Africa office to enhance local research in communities with high HIV prevalence, and as a result, 17 research centers in seven African countries are equipped to conduct clinical trials in line with international guidelines. Fortunately, NPPDs also offered the following solutions, which they cited as necessary to enabling the successful development and delivery of new health tools for LMICs: Sustainable and consistent funding. More predictable, stable, and long-term funding across all phases of product development is needed, as well as diversified funding sources and improved coordination across funders. Better coordination could be achieved through a centralized mechanism tasked with identifying R&D needs, gaps, and priorities. Capacity building for local partners. NPPDs and their partners need sufficient resources to invest in strengthening their local partners’ research and manufacturing capacities. Improving regulatory pathways and capacities. NPPDs noted that policy changes and adequate, sustainable funding are needed to support capacity building and alignment of regulatory requirements. This paper is the first in a series from the GHTC that will examine financing, accessibility, regulatory, and capacity issues facing NPPDs. This first paper provides a high-level overview of the greatest gaps and challenges faced by NPPDs, and further papers will explore these issues in greater detail. The paper is available here on the GHTC’s website.
PATH/Gabe Bienczycki

Written by Kim Lufkin / GHTC
Read time:
In this regular feature on Breakthroughs, we highlight some of the most interesting reads in global health research from the past week. In a continuation of the US Agency for International Development’s (USAID) focus on global health science and technology, GHTC members PATH and Research!America write about the health and economic benefits of US investments in product development. In related news, USAID has released new figures detailing how over the past decade, the agency has been involved in more than 1,600 public-private partnerships with more than 3,000 individual entities The National Institutes of Health published figures detailing how sequestration will impact its 2013 budget. According to the figures, available funds will drop by $1.55 billion from last year. Aeras received at $2.9 million grant from the Bill & Melinda Gates Foundation to work in collaboration with the University of Oxford and biopharmaceutical company Okairos to support the development of vaccines against tuberculosis, HIV, and malaria. PATH has launched a clinical trial in Bangladesh to test a new formulation of oral rehydration solution, a therapy to combat severe dehydration resulting from diarrheal disease.