Polar bears and penguins aren’t the only species threatened by climate change.

Polar bears and penguins aren’t the only species threatened by climate change. Years of research has shown that climate change and global human health are intimately linked. From threatening our food and water supplies, to promoting the spread of infectious and waterborne diseases, the current and potential effects of climate change on global health are diverse and momentous. 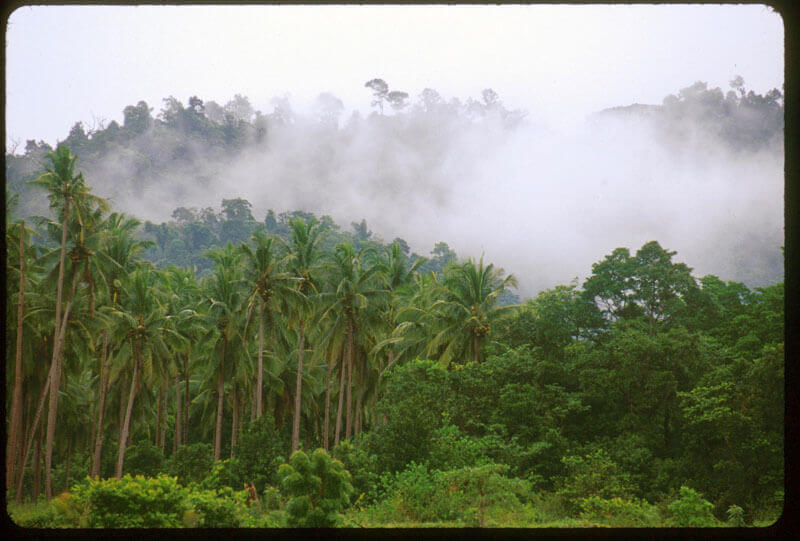 Photo courtesy of the David and Lucile Packard Foundation.

Climate change is damaging our food security and water supply

Extreme climate events like droughts, heat waves, and hurricanes are on the rise, and they disproportionately impact the poorest and most vulnerable areas of the world. Over the past 60 years, the frequency of extreme climate events has increased from an average of two per year to six with an estimated 70 percent of these disasters occurring in the developing world. Extreme weather events like droughts threaten the world’s food supply, while increased precipitation and flooding bring pathogens into contact with our crops and water supply.

A mere 1°C rise in temperature can alter crop yields by 17 percent—a fact that may not surprise Californians, who are witnessing the state’s greatest drought in history and whose farmers have lost 17,100 jobs and have taken a US$1.5 billion hit. Changes in temperature and rainfall have also been associated with increased rates of diarrhea and dysentery everywhere from Bangladesh to Ecuador, Botswana to the Pacific Islands.

Warmer temperatures can also accelerate the growth of bacteria and reproduction of parasites, leading to increased transmission of salmonella, gastroenteritis, and other water- and food-borne diseases which can make us sick.

“There must be a focus on health systems – there is massive inequality in health systems throughout the world. Because of this, the loss of healthy life years as a result of global environmental change is predicted to be 500 times higher in Africa than in European nations, despite Africa making a minimal contribution to the causes of climate change.”

Climate change is promoting the spread of infectious diseases

Perhaps the most notable and direct connection is the impact of rising temperatures on insect-borne diseases—many of which have historically been seasonal or geographically confined.

It appears that mosquitos and ticks, like most humans, prefer warmer climates. In hot, humid weather, they reproduce faster and bite more often, whereas the winter chill can kill both the insects and their eggs.  As global temperatures continue to rise, disease-carrying insects are expected to shift or expand their breeding and biting grounds, infecting people in new regions and for longer periods of time throughout the year. The pathogens carried by these insects—including bacteria and viruses—are also sensitive to shifting climate patterns, and warmer weather is ideal for their survival, reproduction, maturation, and ultimately their infectivity. The lifespan of a mosquito is only a few short weeks, so the accelerated maturation of a pathogenwithin the insect can have a major impact on the spread of the disease.

Cases of Chagas disease, dengue fever, and chikungunya have recently been reported in the southern United States, while cases of tick-borne encephalitis and Lyme disease are increasing in Europe. Malaria has expanded into higher altitudes in Africa and across the Mediterranean to Greece; this is particularly significant as acquired immunity is common in malaria-endemic countries, meaning that the disease may be more virulent in new territories.

“America's public health is deeply tied to the health of our environment. As our planet becomes more interconnected and our climate continues to warm, we face new threats to our safety and well-being.”

The threat posed by the spread of these climate-sensitive diseases is amplified by the lack of drugs, vaccines, and other technologies to address them. Chagas disease is curable if treatment begins early, making rapid diagnosis critical, however, none of the treatments are approved by the US Food and Drug Administration. There are no vaccines for Chagas, chikungunya, or dengue fever, and no treatments for chikungunya or dengue. Resistance to the leading agent in malaria treatments—artemisinin—has been reported in Asia. Leishmaniasis and schistosomiasis, two neglected tropical diseases for which there are no vaccines, are both climate-sensitive, and are endemic in regions of the world considered particularly vulnerable to an outbreak due to poverty, conflict, and mass migration.

Mitigating the risk of climate change will require investment in research and development for neglected, infectious diseases, particularly those that are sensitive to climate change.

Climate change is not on the horizon. It is here. And some of the world’s most vulnerable populations are already feeling its impact. As the world seeks to implement solutions to prevent further environmental damage, we must invest in the tools needed to mitigate and adapt to climate change. The consequences for global health could be monumental if we fail to develop the vaccines, diagnostics, or drugs needed to control and slow the spread of infectious diseases.

Research Roundup: resistance to antimalarials in Africa, R&D for bioterrorist attacks, and more

Written by Kat Kelley / GHTC
Read time:
Scientists at the London School of Hygiene and Tropical Medicine have identified a mutation in Plasmodium falciparum—the parasite responsible for the majority of fatal cases of malaria—that makes the parasite more resistant to quinine and artemisinin, the leading antimalarials worldwide. The mutation was discovered in Kenya in 2013, where children were reported to still have the parasite in their blood after being treated for malaria. The mutation, found in the ap2mu gene, makes the parasite 42 and 32 percent more resistant to quinine and artemisinin, respectively. Congresswoman Martha McSally (R-AZ), Chairman of the House Committee on Homeland Security’s Subcommittee on Emergency Preparedness, Response, and Communications, called on the White House to name a “single coordinator for agencies responsible for responding” to public health crises or bioterrorist attacks in a recent hearing. Former Senator Jim Talent testified before the subcommittee, asserting that the Biomedical Advanced Research and Development Authority has been “chronically underfunded” and that a key lesson learned from the Ebola outbreak is that “it is too late to develop countermeasures after an outbreak or attack has happened.” The co-chairs of the Alliance for Biosecurity echoed this message in an op-ed published in The Hill last week. The authors, who serve as presidents of biotechnology companies Bavarian Nordic and Elusys Therapeutics, call for increased funding for biomedical research and development (R&D), specifically, consistent and multi-year investments in public-private partnerships. Stephen Ostroff, acting commissioner of the US Food and Drug Administration (FDA), does not have any major changes planned for the agency, and will continue former commissioner Margaret Hamburg's efforts to regulate tobacco products and enhance food safety. Dr. Ostroff also stated that the FDA is currently consulting the House Energy & Commerce Committee on the draft of the 21st Century Cures Act. During her final speech as commissioner, Hamburg expressed concern that the legislation could weaken the FDA’s rigorous drug approval process, leading to inefficient or even unsafe products on the market. Newt Gingrich, former United States representative (R-GA), called on Congress to double the National Institutes for Health (NIH) budget in an op-ed in the New York Times last week. Gingrich notes that 92 percent of NIH’s funding goes directly to research and that despite a 50 percent increase in grant applications, funding has either stagnated or declined each year since 2003. Gingrich asserts that “health is both a moral and financial issue” and that support for the NIH should be bipartisan. He admits that he is not usually a keen proponent of increased government spending, but that the government has a “unique” role to play in its ability to mobilize resources and due to the long-term health care savings realized by investing in research for treatments and cures.
PATH/Patrick McKern

Research Roundup: publication of clinical trial results, the establishment of an African CDC, and more

Written by Kat Kelley / GHTC
Read time:
The World Health Organization (WHO) released a statement last week calling for the publication of all data from clinical trials for drugs, vaccines, and medical devices. The pharmaceutical industry has made great strides in reporting the results of clinical trials since the establishment of the WHO International Clinical Trials Registry Platform. However, a report released in conjunction with the WHO statement demonstrates that negative or inconclusive clinical trial results often go unreported, and there is still a need to publish data from older clinical trials. The United States Centers for Disease Control and Prevention (US CDC) is partnering with the African Union to establish an African Centres for Disease Control and Prevention (African CDC) comprised of a Coordinating Center in Addis Ababa, Ethiopia—where the African Union is located—and five Regional Collaborating Centers across the continent. The purpose of the African CDC is to support and connect African ministries of health to monitor and respond to disease outbreaks. The US CDC will provide initial technical expertise and will sponsor ten African epidemiologists and two public health experts from the US CDC to staff the Coordinating Center and Regional Collaborating Centers. Dr. Jack Whitescarver, director of the Office of AIDS Research (OAR) at the National Institutes of Health (NIH), will step down in July after leading the Office for 15 years. Dr. Whitescarver first joined the NIH in 1977 and he was involved in the initial detection and monitoring of the HIV and AIDS epidemic in the United States. He was also a major player in the NIH’s HIV and AIDS outreach and education efforts, prior to the establishment of OAR in 1988. Under his leadership, OAR has supported both international and domestic research efforts, with a focus on HIV and AIDS in minority populations and in women and girls. The United States Patent and Trademark Office (USPTO) at the US Department of Commerce announced the winners of the 2015 Patents for Humanity program. The winners will be granted an expedited patent application, ex parte reexam, or ex parte appeal before USPTO. This year's winners include Sanofi—the manufacturer of a synthetic version of the antimalarial artemisinin—and Novartis, a pharmaceutical company that has discovered a class of compounds that show promise in fighting drug-sensitive and drug-resistant tuberculosis. Sanofi is partnering with GHTC members PATH and the Bill & Melinda Gates Foundation to produce synthetic artemisinin, while Novartis has provided TB Alliance—another member of the GHTC—with the compounds to continue the research and development of treatments for tuberculosis.