A challenge that sparks innovation and saves lives

“Innovation can’t take place if people say we don’t need new tools,” said Partners in Health Co-founder Paul Farmer at an event sponsored by the Saving Lives at Birth: A Grand Challenge for Development program last week in Washington, DC. And new tools were certainly on display at DevelopmentXChange 2014—a key component of the Saving Lives at Birth program. The DevelopmentXChange is an opportunity for hundreds of bright minds to come together and display groundbreaking prevention and treatment approaches for pregnant women and newborns in low- and middle-income countries. The event is also a time for key policymakers and decision makers to talk about the importance of science, research, and innovation for global health. Saving Lives at Birth—a partnership between the US Agency for International Development (USAID), the Bill & Melinda Gates Foundation, the Government of Norway, Grand Challenges Canada, and the UK Department for International Development—provides funding for a select group of finalists that offer the most innovative new tools. 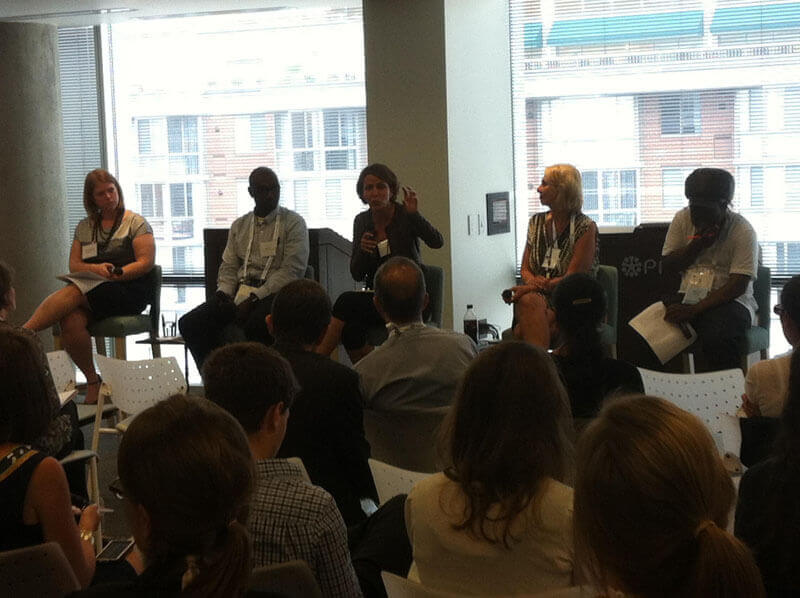 Large crowds were spotted at the DevelopmentXChange Marketplace the morning of the event.

The DevelopmentXChange opened up with a marketplace where finalists of the Saving Lives at Birth challenge could display their innovations and demonstrate how these new tools could make a difference in the lives of mothers and children in low-resourced settings. Imagine a giant science fair where, instead of competing for a blue ribbon, the participants are competing for funding to make their innovation a reality. On display were several proposed innovations from GHTC members FHI 360, Jhpiego, and PATH. FHI 360 proposed a synchronized schedule for postpartum women to receive family planning services and for their newborns to receive immunizations and growth monitoring all at the same time. One of the innovations Jhpiego developed was the E-Partogram—an affordable, easy-to-use handheld electronic decision-making tool for preventing and managing complications during labor. PATH was one of many other organizations to address postpartum hemorrhage by developing heat-stabilized oxytocin—a common treatment for hemorrhaging women after childbirth—in a fast-dissolving oral tablet that would treat postpartum hemorrhage. 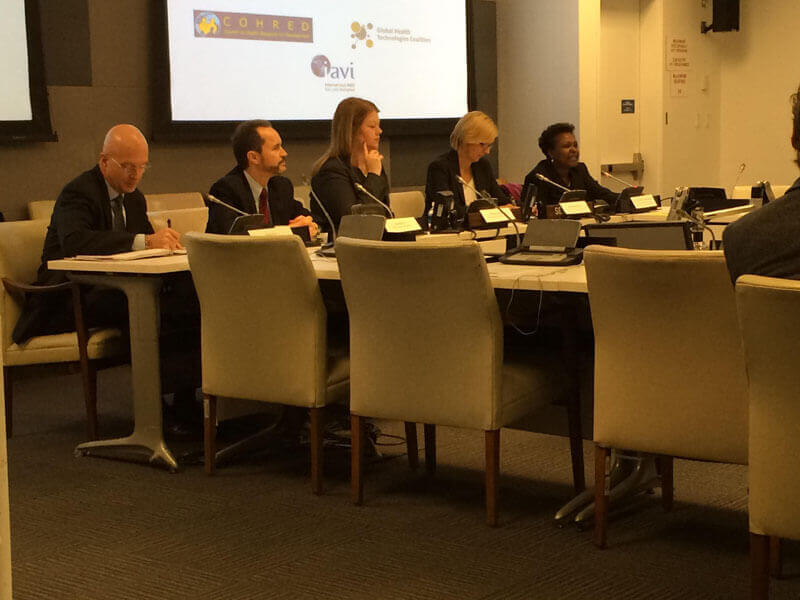 After the marketplace, policymakers, scientists, members of the global health community, and the Saving Lives at Birth finalists gathered together for the DevelopmentXChange Forum, which included opening remarks from USAID Deputy Assistant Administrator for Global Health Katie Taylor, USAID Administrator Raj Shah, and Paul Farmer. Administrator Shah commended many of the past year’s innovations for making a real difference in the lives of women and children, and commented on how the Saving Lives at Birth program influenced the creation of USAID’s new Global Development Lab.

The rest of the forum featured innovators from all over the world, including past Saving Lives at Birth challenge winners. One of the innovations featured at the forum was a new, low-cost device that assists in delivering babies when complications occur in the second stage of labor. The device—called the Odon Device—was originally thought of by an Argentine mechanic named Jorge Odon when he was thinking about how to get a cork out of a bottle one night. The Odon device is made of a film-like polyethylene material and could be a safer and easier way to deliver complicated births rather than using than forceps or a vacuum extractor. After Mr. Odon partnered with Becton, Dickinson and Company, and received funding from Saving Lives at Birth at last year’s DevelopmentXChange, the Odon Device was finally ready for full development. Now the device is being tested in clinical trials and—if approved—has the potential for wide application in resource poor settings.

If there was one thing very apparent during the day, it was that great, life-saving ideas can come from anyone—no matter what they do or where they live. Saving Lives at Birth is a good example of a mechanism that brings governments, foundations, and for-profit companies together to encourage creativity and innovation to tackle some of the world’s most pressing problems. The day concluded with Wendy Taylor—director of USAID’s Center for Accelerating Innovation and Impact—announcing the winners of the Saving Lives at Birth challenge. GHTC members PATH and FHI 360 both won seed grants to get their ideas up and running so that one day they could have the potential to protect and improve the lives of mothers and children all over the world. GHTC congratulates all of the challenge winners and is inspired by every single one of the innovators who were at this year’s DevelopmentXChange.

Written by Nick Taylor / GHTC
Read time:
In this regular feature on Breakthroughs, we highlight some of the most interesting reads in global health research from the past week. This month at the Saving Lives at Birth: A Grand Challenge for Development’s DevelopmentXChange event in Washington, DC, bright minds from all over the world came together to display groundbreaking prevention and treatment approaches for pregnant women and newborns in low- and middle-income countries. The event also offered an opportunity for policymakers and decision makers to talk about the importance of science, research, and innovation for global health. During last week’s US-Africa Leaders Summit, the White House released a fact sheet on American and African cooperation for global health. As the world’s largest donor to global health, the United States is committed to working with African governments to improve the health of its citizens—including achieving an AIDS-free generation, ending preventable maternal and child deaths, enhancing global health security, and supporting African countries invest in the health of its own citizens. The World Health Organization said it thinks an Ebola vaccine should be ready for public use by 2015. There is currently no vaccine or cure for Ebola, which is currently widespread in parts of West Africa and has killed over 900 people since March of this year. This year’s outbreak is the biggest ever reported since Ebola was discovered over 40 years ago. In the Huffington Post’s blog, Dr. Jonathan Mermin—director of the Center for Disease Control and Prevention’s National Center for HIV and AIDS, Viral Hepatitis, Sexually Transmitted Diseases, and Tuberculosis (TB) Prevention—writes about the desperate need for new tools to prevent, detect, and treat TB and that “until we have better ways of detecting and treating TB, thousands of Americans and millions of people worldwide will continue to suffer from an illness that should have been consigned to history long ago.” An experimental vaccine to prevent dengue could be commercially available by July 2015, according to the vaccine’s makers—pharmaceutical company Sanofi Pasteur. There is currently no vaccine to prevent this mosquito-borne disease that affects thousands of people—mainly in low- and middle-income countries—every year.
JustMilk

Written by Marissa Chmiola / GHTC
Read time:
Breastfeeding has served as the primary method for a mother to feed her infant since the dawn of humanity, but could it also be a way for her to administer life-saving medicines to her baby? The answer is yes—if a group of researchers from the United States and United Kingdom have their way. The JustMilk nipple shield contains a rapidly dispersible tablet containing drugs or nutrients that are delivered to the infant during breastfeeding. Photo: JustMilk The researchers—who have formed the nonprofit JustMilk—are developing a nipple shield device that allows a breastfeeding mother to administer drugs or nutrients to her infant through her breast milk. The device is easy to use—a mother would simply place the shield—which contains a rapidly dispersible tablet potentially containing antimalarials, antiretrovirals, antibiotics, or micronutrients—on her breast while feeding her child. As the milk passes through the device, it breaks down the tablet and delivers the medicines or nutrients to the infant. The “eureka moment” According to JustMilk’s cofounder Dr. Stephen Gerrard, PhD, the idea for the device emerged out of a design challenge—how to prevent HIV transmission during breastfeeding in developing countries—that his team was issued at the 2008 International Development Design Summit. The team had an idea to create a wearable device that deposits HIV-inactivating compounds into breast milk. After discovering the existence of both potential compounds and a wearable device—a nipple shield—the team realized it was on to something. “The eureka moment was that we could combine the two, and then you have a way of depositing antimicrobial compounds into milk,” said Gerrard. “The second point straight after that was—hang on—this could be a general drug and nutrient delivery device for infants.” Since then, the JustMilk team has focused on the broader potential of the device as a drug or nutrient delivery system. “Over 4.8 million infants under the age of one die each year from conditions like pneumonia, malaria, diarrhea, and HIV,” said Gerrard. “And an overwhelming majority of those conditions can be treated, and the deaths can be avoided by appropriate administration of agents to the infant….We’re trying to tackle those big issues, and we’re looking to make a major impact.” Overcoming the challenges of drug delivery in low-resource settings Gerrard believes JustMilk’s device offers advantages over conventional methods for administering drugs to infants, which often create challenges in low-resource settings. Liquid drug formulations can have a limited shelf life and require refrigeration; while powdered or dry formulations require reconstitution with potable water and can create accurate dosing issues. Gerrard believes a prefilled, disposable version of the JustMilk nipple shield could address many of these challenges, as well as empower a mother by allowing her to personally administrator medicine to her baby in a natural context. A work in progress: Putting users first JustMilk co-founders Geoff Galgon (left) and Dr. Stephen Gerrard, PhD (right) at the Saving Lives at Birth Challenge. Photo: JustMilk JustMilk, which received a grant last year from the Saving Lives at Birth Challenge, is still in the early stages of product development and is currently conducting research to inform the design, marketing, and eventual delivery of the device. In the next two months, JustMilk will begin user acceptability studies with mothers at the University of Venda in South Africa to answer questions like: should the device be disposable or prefilled with medicines, how should it be packaged, and would its use generate stigma for users—and if so—how can that be prevented? JustMilk also plans to conduct a study examining how infants react to intermittent use of the nipple shield to determine if the breastfeeding process is impacted by the infant using the shield once or twice a day. Gerrard sees that these studies are vital to the development process. “You have to have your end user right there from the beginning of the design process,” he said. “You have to get all these things right in the first place; otherwise, if you’re going through the clinical trial approval process and you’ve got something wrong, you’re going to have to go back again.” Gerrard acknowledges that the next six months will be a critical time period for the organization as it seeks to establish the viability of the product, mitigate any risks during its development, and potentially attract the involvement of medical device manufacturers. He explained, “Our goal with this device is to establish feasibility, demonstrate that it can confer a health benefit to infants, and hope the market reacts.” Marissa Chmiola is GHTC’s communications officer. JustMilk received a funding grant in 2013 from the Saving Lives at Birth Challenge—which is supported by the US Agency for International Development, the Bill & Melinda Gates Foundation, the Norwegian Ministry of Foreign Affairs, Grand Challenges Canada, and the UK Department for International Development. JustMilk has also received support from the Clinton Global Initiative, public health charity FHI 360, the University of Cambridge, and the National Collegiate Inventors and Innovators Alliance.