‘These drugs work. I will live to see my grandchildren’

John Donnelly, a writer working with the GHTC, will be blogging this week from our trip to visit global health research projects in Kenya. This is his second post from the field.

John Donnelly, a writer working with the GHTC, will be blogging this week from our trip to visit global health research projects in Kenya. This is his second post from the field.

ELWESERO, Kenya -- In the year 2000, Kenya had just a handful of HIV-positive people taking antiretroviral drugs.

Today, just 11 years later, the country has a half-million people on these drugs, which have saved many from an early death.

While much of the focus of this feat has gone to the extraordinary efforts to expand the access to treatment—the government of Kenya, the US President’s Emergency Plan for AIDS Relief (PEPFAR), and the Global Fund to Fight AIDS, Tuberculosis, and Malaria take much of the credit—little acknowledgment has been given to the research that made it possible.

On GHTC’s trip through Kenya this week, the impact from research of years ago is being felt throughout the country. And the promise of today’s research is being eagerly talked about among health workers, as well as mothers and fathers who are hopeful for more lifesaving innovations.

At the Elwesero Men Initiative Support Group on Thursday in western Kenya, about 10 members came to meet us. A few stood to tell stories of nearly dying from AIDS and then recovering rapidly because of the medication. 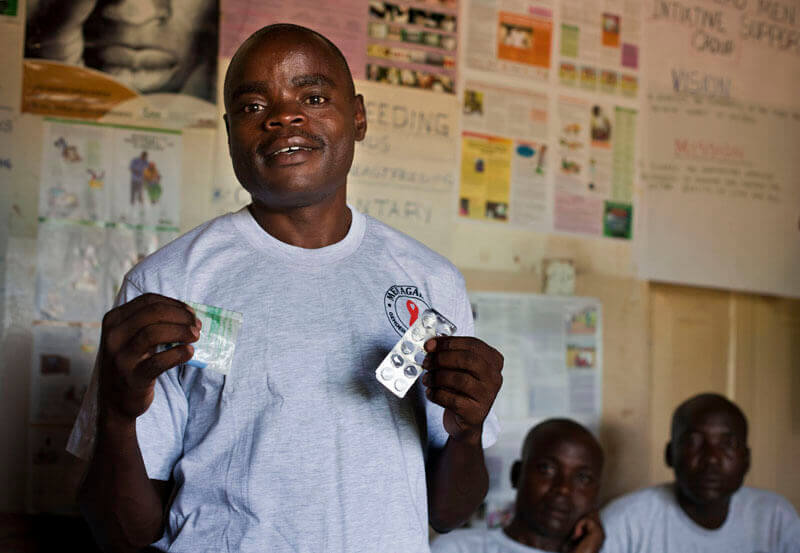 Peter Owiti Omotsi, 39, father of five, was a former bus driver in Nairobi. He said he began to feel sick. At first, he said, it felt like malaria, with fevers and chills. “Then I felt I was bewitched,” he said. “My body was wasted.” He dropped from 175 pounds to 125 pounds.

In 2008, he tested positive for HIV. His wife tested negative. His CD4 count was 95; anyone under a 200 count at the time was put on antiretroviral drugs. He started treatment, and he improved dramatically.

“I carry these drugs with me everywhere I go,” he said, holding up a packet of the medicine. “The rest of my life is because of these drugs. My life has changed. I used to drink a lot and smoke. Now I do none of that. I eat nutritious foods. With God and these drugs, my life can be prolonged.”

Another member of the support group, Peter Lumumba, 49, thanked researchers for saving his life.

Lumumba, a father of six, was first diagnosed with HIV in 1987 and started antiretroviral treatment in 2006.

“I am now well,” he said. “People are totally astonished. I helped start this support group, and when we are telling people we are (HIV) positive, they will say, ‘No, you are lying." Without the research that led to this lifesaving medicine, he said, “I would have already died. “ 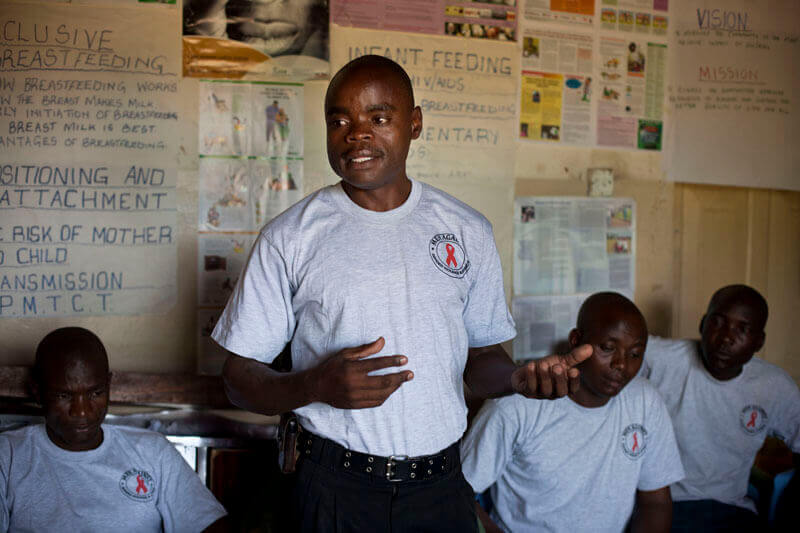 Later in the day, Omotsi took us to his home on a hillside in a village named Ematsayi. He showed off his garden of spinach, maize, onions, kelp, watermelon, peppers, bananas, papayas, and a local vegetable called managu.

“Everything in the garden has high nutritious value,” he said as he waited for his children to return home from school.

He said if he could talk with the researchers who produced the various antiretroviral medicines, “I would tell them that they can see right here the benefits of what they created. They can see my life. These drugs work. I believe before I die, I will see my grandchildren. Without these drugs, that probably wouldn’t happen. But I have some years to live now. I can at least be proud of my grandchildren.”

John Donnelly is a writer working with the GHTC.

Written by John Donnelly / GHTC
Read time:
John Donnelly, a writer working with the GHTC, is blogging following our trip to visit global health research projects in Kenya. This is his third post from the field. KISUMU, Kenya – The shortcomings in the tools to fight tuberculosis (TB) are stunning. There is no effective TB vaccine beyond childhood. The most common TB diagnostic tool was developed in the 1880s and fails to detect the bacterium in half of the cases. And the drugs needed to treat TB are also ancient – the most recent ones were developed more than 40 years ago. As a result, resistance to TB drugs has run wild in parts of the world. There are an estimated 440,000 cases of multi-drug resistant TB globally, and at least 58 countries have reported cases of extensively drug resistant TB, which can be incurable. “TB is an example of what happens if you fail to invest in research,” said Kevin Cain, TB Branch Chief at the KEMRI/CDC Research and Public Health Collaboration in Kisumu. The Kenya Medical Research Institute (KEMRI) and the US Centers for Disease Control and Prevention (CDC) have been partnering together in the country for more than 30 years. “It means you end up with a diagnostic tool that is over a century old, you are using drugs from the 1960s and older. And you end up with the situation we are in: many cases of extensively drug-resistant TB, which can be untreatable.” But in western Kenya, and in several other research sites around the world, clinical trials are ongoing for a new vaccine, drugs, and diagnostics. On GHTC’s trip to Kenya, we were able to see participants of a Phase II trial of a TB candidate sponsored by Aeras, a GHTC member and non-profit product development partnership (PDP) dedicated to the development of an effective and affordable TB vaccine for all age groups. Currently, the Bacille Calmette-Guérin (BCG) vaccine, which is over 80 years old, is only partially effective; it provides some protection against severe forms of pediatric TB, but is unreliable against adult pulmonary TB. The trial in western Kenya involves giving two doses to children: one on the initial visit and a second 28 days later. Dr. Samuel Ouma, a physician working on the TB trial, said that 144 children have enrolled at his clinic in Boro. The trial offers free health care to the babies enrolled in the study. We met with one of the mothers of the children in the study. Sharon Akinyi Olunga, 27, said she asked many questions before enrolling her baby, Winfrey Atieno Juma, now 13 months old. She said she was very happy she had enrolled her daughter. “It’s good for our babies,” she said. “I loved that my child should go into this research project first because if anything happened to her, whether she was sick with a cold or pneumonia, she would immediately receive free medical care. Here, funding for medical care is really difficult to get. So it put me at ease.” Olunga said there was another reason she wanted her daughter to be part of the trial: it served a greater good for children around the world. “I think of so many babies, so many children in Africa and around the world, have been helped by vaccines,” she said. “If this vaccine works, that means all those children will be helped by my baby’s participation. That makes me feel very good.” Watching Olunga was her grandmother, Hilda Auma Juma, who was in her 70s. Juma also said she was glad to see medical research in her village and in neighboring villages. “I am happy because it helps the health of all babies,” said Juma, who had nine children. She said health care has dramatically improved for mothers and children compared to the situation a half-century ago. “In my time, when I gave birth, mothers only had the faith of God to take care of the babies,” Juma said. “Now mothers have all these vaccines. Babies and children are living. We hope we may soon have more vaccines. It’s wonderful.”
PATH/Glenn Austin

Children in need of better diagnostics

Written by Kim Lufkin / GHTC
Read time:
GHTC’s Kim Lufkin is in Kenya this week, documenting global health research projects and the impact on people in the country. This is her first post from the field. On Tuesday, our team went to visit the US Embassy in Nairobi in order to meet with some fantastic Americans working in Kenya for several US agencies, like the CDC, USAID, State Department and DoD. On the way through security, the guard pulled out the small device I constantly carry in my purse to monitor my blood glucose levels—I’ve been a Type I diabetic since age five. I realized how fortunate I am to have a quick, easy-to-use diagnostic tool that I can carry with me wherever I go. In fact, the range of testing and treatment options made available to me has grown leaps and bounds since I was a child, thanks to research and development for new diabetes products. This realization in the security line at the US Embassy stood in stark contrast to the diagnostic and treatment tools available to children in Kenya suffering from a painful and deadly neglected disease called visceral leishmaniasis, or VL. These children are in desperate need of new diagnostic and treatment tools. I remember when I was first diagnosed with diabetes at five years old, there wasn’t a fast and accurate way to monitor my glucose levels. My mom would prick my finger to withdraw blood, and then apply my blood to a small test strip. After waiting a short amount of time, she’d wipe the blood away, and the strip would change colors. She’d then have to compare the color to photos on the back of the bottle, making her best guess about what range my glucose level fell within. And the level wasn’t even current – it represented what my glucose level was several hours before—making preparing my insulin dose even that much more difficult. My mom would then have the constant battle of giving me my insulin with a syringe injection at least three times a day, which I fought tooth and nail every time. Photo: Glenn Austin/PATH This hardly compares with the process children in Kenya have to suffer through in order to determine if they have VL. On Monday, we met with Simon Bolo—an inspiring man who works with the Drugs for Neglected Diseases initiative (DNDi) in Nairobi. He told us how the only 100% accurate ways of diagnosing VL, even for children, involves incredibly painful punctures to their spleen or bone marrow. Both are conducted with giant needles required to pierce the skin and bone marrow. Children suffering from VL deserve the same commitment to research that I’ve benefited from as a diabetic in the US. Over the past 20 years, the methods available to me to test my glucose levels throughout the day have vastly improved—I now have a small machine that requires little blood and gives me accurate results in five seconds. My treatment options have also advanced, from the types of insulin available to me and the fact that I now use an insulin pump, doing away with the need for multiple injections every day. Because of these improvements, my overall health as a diabetic has improved tremendously. A matched commitment to research for neglected diseases such as VL could have the same results for children in Kenya and around the world. These children should not have to go through such painful diagnostic procedures to confirm whether they have VL—imagine if they had access to a simple, effective, and rapid blood test that they could easily access in their community’s clinic. VL affects the “poorest of the poor,” Simon told us on Monday. “Our governments need to wake up and take responsibility” for supporting research that can lead to lifesaving new tools. Children in Kenya deserve the same access to modern and effective diagnostics and treatment that I’ve has as a diabetic in the US. Increased support for neglected disease research can provide them with that.